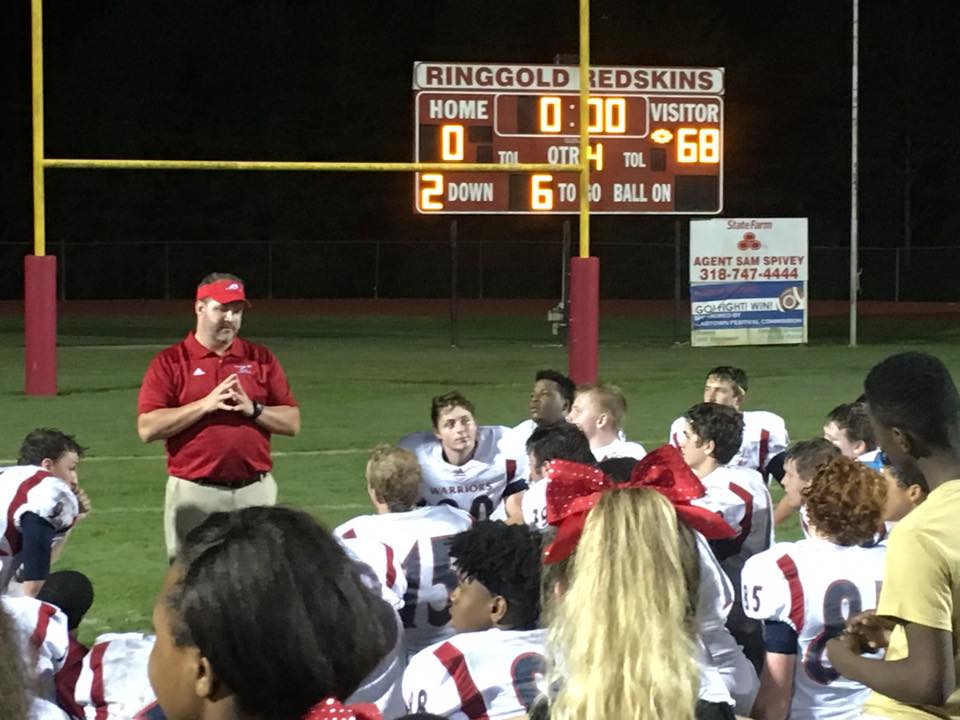 Minden took a pounding in their 2017 debut, as Haughton running back Lavonte Gipson and quarterback Cameron Townsend ran roughshod over an outmatched and exhausted Tide defense at Harold E. Harlan Stadium.

Minden quarterback Seth Tyler had a rough night, tossing three interceptions and fumbling early in the first quarter. Tyler did manage to score the Tide’s only touchdown of the night, capping a methodical 8-yard drive with a 1-yard quarterback sneak that at the time cut Haughton’s lead to 16-7.

The Bucs responded with a touchdown drive and then picked off Tyler setting up a 29-yard Gipson TD run to erase any chance Minden had at 29-7 midway into the second quarter.

The current Lakeside Warriors will remember this night forever as the night they stopped the streak.

The Warriors offense looked lethal in terrorizing the Redskins’ D to the tune of 68 points as the defense was equally impressive in pitching a shutout.

It was the first game for the Warriors under new head coach Jason McClendon.

The streak was history early on as Lakeside struck early with touchdowns from Bo Boley and Chase Mitchell. Jordan Preuett was impressive on the night, hitting Gavin Jones and Tyrese Miles for second-half touchdowns and running for a score in the second quarter. Running back Buffat Coleman added a rushing touchdown.
The Warriors (1-0) make their home debut next week and should be coming home to an energized fan base.

Haynesville hangs on to down North Webster

The North Webster Knights put up a good fight against perennial power Haynesville, but the Golden Tornado defense proved too tough in the end as the Knights fell 19-7 at Red Franklin-Memorial Stadium.

TJ Hawthorne scored from 12 yards out on the ground to cut Haynesville’s lead to 13-7 in the third quarter. For the majority of the contest’s remainder, the two defenses stood tall.

Haynesville threw the knockout punch with 52 seconds to play when North Webster tossed an interception on 4th-and-15 that was returned for a Golden Tornado touchdown.