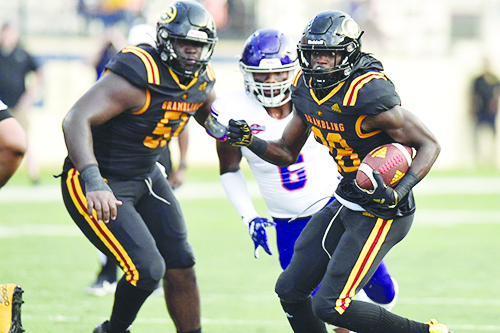 SHREVEPORT — The game between Grambling State and Northwestern State was played Saturday night at Independence Stadium.

But at times it felt more like a day at the races at Louisiana Downs.

After falling behind early, the Tigers suddenly stormed out of the gates and never looked back en route to giving new head coach Hue Jackson his first collegiate coaching victory with a 47-21 win over Northwestern State in the Shreveport Classic.

GSU quarterback Quarterius Hawkins threw for 292 yards and three scores in the first half while Nebraska-transfer Washington ran wild for 95 yards on five carries and touchdown runs of 61 and 25 yards in the first quarter alone.

Hawkins did much of  his damage in the second stanza, connecting on touchdown passes of 83 yards, 20 yards and 71 yards before halftime.

Grambling State’s opening drive stalled as the G-Men were  forced to punt, with Northwestern State responding with a  86-yard, 11-play drive with quarterback Miles Fallin hitting Zach Patterson on a 13-yard touchdown pass that gave Demons a 7-0 lead with 9:40 remaining in the opening quarter.

And at first it looked like the Demons might be the ones galloping away as they drove to the Grambling 25-yard line before Donald Lee’s end zone interception turned the ball back over to the Tigers.

Then Hawkins and Washington took control for the Tigers.

Grambling pushed its lead to 21-7 at the 12:13 mark of the second quarter and by halftime had pushed that advantage to 41-7.

Hawkins finished by completing 13-of-23 pass attempts for 293 yards and three touchdowns  for GSU, which will take on Jackson State on Saturday.