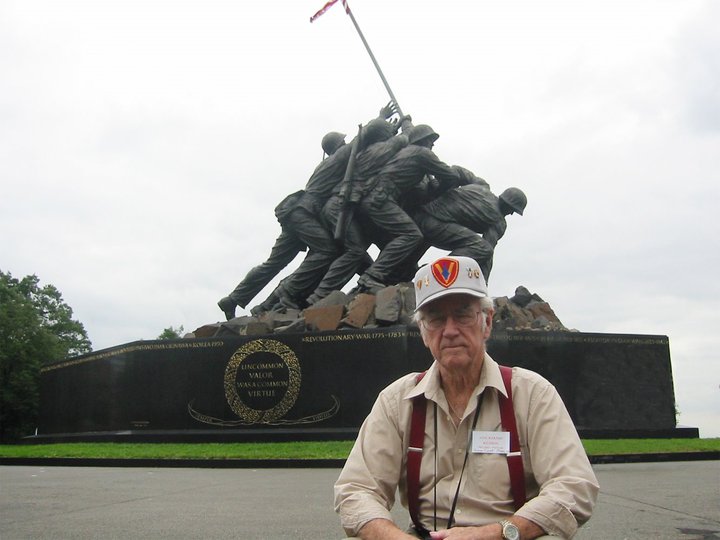 Two people will be honored posthumously at Turner’s Pond Monday during a flag changing ceremony and service.

Beginning at 6 p.m., The American Legion Wiley-Pevy Post #74 Color Guard will change the U.S. flag and all military service flags. Flying over Turner’s Pond are flags that represent each branch of military service: the Army, the Air Force, the Navy, the Marines and the Coast Guard.

To honor Calvit, we are publishing the Cameo of Minden that Juanita Agan wrote on him.

This month we are remembering the men who fought in World War II to coincide with the dedication of the monument in Washington, D. C. that honors the veterans of this war. Today’s Cameo is of one who not only fought but was awarded the Silver Star for bravery above and beyond the call of duty. One by one our heroes are being claimed in death and it is important that we remember these who served and served so well that they have been honored by our government. That man is George Calvit

George Calvit was born in Minden, the oldest of five children. He finished Minden High School in 1939,and married the class Salutatorian, Dorothy Colclasure, in 1940. They had three daughters, two who are living, and the middle daughter died as a little girl.

George volunteered for the U.S. Marine Corp in 1942. After his training he was sent to the South Pacific. He served two tours of duty in the South Pacific, but the battle for the Island of Iwo Jima was when our Minden boy distinguished himself by his bravery

George was a gunner on a .37 mm anti-tank gun with 26th Regimental Weapons of the 5th Division of Marines that 19th of February, 1945. He said that the Marines went in waves on LCVP boats. As they landed on the beach Mount Suribachi was on their left and high plateaus were on the right. They were enfiladed from the left and from the right.

Each division has around 20,000 men, and that day the 4th and the 5th Division of Marines with about 2/3 of the 3rd Division was in on the invasion. When they hit the beach they immediately sank 8 to 10 inches in the black sand that covered the island. For about 20 feet straight ahead the beach was level and covered with this sand, and in front of that was a slight slope also covered with the sand. They soon discovered that only the track vehicles could negotiate the slight hill and all the rest could not climb up the sandy slope. They spent the afternoon and the night on that beach since they could not get off. All night they were subjected to mortar fire and small arms fire. In his platoon were about 30 men. That night half of them were casualties. They were assigned two men to a foxhole. George shared his foxhole with Lt. Griswold, his platoon leader. Each was to take a watch. Lt. Griswold took the first watch which was about four hours.

When morning came my friend awoke to find that the Lieutenant had watched all night and let him sleep. Lt. Griswold was so worried and concerned over the fact that half of his men were casualties that he could not sleep. Later Lt. Griswold was transferred to the Infantry division and he was also awarded the Silver Star.

George was at a crossroads on the island and trying to fasten a flame-thrower to a Marine’s back. The Japanese lobbed three mortars into the group of men. Shrapnel flew everywhere, striking the man he was placing the flamethrower in the leg, and striking my friend in the back and the legs. After the medics picked most of the shrapnel out of him, he returned to his unit and the fighting.

Later he and his buddies sat down on the edge of a crater, when they were subjected to a line of artillery fire. George had pulled off his field jacket, folded it and laid it down on the rim of the crater beside him. The artillery fire knocked them into the crater. Again he had to have shrapnel picked out of his back and legs. When George picked up his jacket, it had been riddled with holes.

Many officers and platoon leaders were being killed and others who replaced them were being killed too. George was asked by his commanding officer to transfer to the Infantry as a squad leader. He did and assumed the leadership. He directed the men to go around a huge rock. As they went to the right he went left and immediately hand grenades were tossed at him by hidden Japanese. He and his men grabbed them quickly and tossed them back into the caves. They were able to grab them as fast as the Japanese threw them until more people started throwing them and at last two of the grenades exploded, with shrapnel striking the left side of George’s face and his shoulder.

The officers were being killed along with the non commissioned officers. They asked for volunteers to direct fire for the tank into the Japanese pillbox. George volunteered and knelt outside the tank and with the telephone directed fire. This time the area was sprayed with machine gun fire. George was shot in the right shoulder and thru the right lung, three ribs were torn loose and the lung collapsed. He crawled behind the tank to keep from being shot more. They came and placed George on a stretcher and carried him to the hospital there on Iwo Jima. They gave him morphine and left him to sleep. His sleep was filled with dreams of being out in water. When he awakened from the morphine induced sleep he was being sprayed with a wet substance on his face. It was the wound in his shoulder that had not been treated and was gushing blood. They immediately flew him to Guam to a hospital better equipped to take care of him. His description of himself is both funny and sad. He had been out in the field for a long time, many days without a bath or a shave. In the hospital there on Iwo Jima they had cut away his clothes to see the wounds but had left him his gun holster and his automatic .45 pistol. He said he was quite a sight with the beard, the filth on him, naked except for the gun and holster, which was all he had with him.

There in the hospital nurses came to him and told him that they would send one of the national service organizations to advance him money to buy toilet articles, I’ll not identify the organization but when she brought him the paperwork to sign for the advance she insisted he sign with his normal, official signature. Since his right arm was injured George told her he couldn’t sign his usual signature, could he use his left hand. She told him no and tore up the paperwork and left. When the nurses came back and asked if he had his supplies, he told them what had happened. They were appalled and among the nurses they made up the $20.00 the wounded Marine needed and got the supplies for him.

When his turn came to be sent to Hawaii to the hospital he was carried to the ship in an ambulance and left there. It was about 115 degrees in the shade. His wounded right arm was bigger than his leg with swelling. His fever was high and he was in constant pain.

Someone came to see about him and called in a doctor. He promptly ordered him back to the hospital there in Guam and eight doctors came together and examined him. Finally they told him that they did not know what was wrong with his arm – either it was gangrene, or the shot to prevent gangrene had caused a reaction. Either way they felt like amputation at the shoulder was the only answer to save his life.

He said that he had rather die than have his right arm cut off. They constructed a trough and filled it with ice. His arm was laid in the trough for about 45 minutes at the time. Then it was taken out and allowed to warm up. Later it was put back into the ice pack and again removed. After three days some of the swelling subsided. George said that he could not say enough good things about the Army nurses and their efficiency. He said they far exceeded the Navy nurses that had treated him. They flew him to Hawaii in a DC-3 or better known as a C-47. As they flew into the harbor he looked down and saw the U.S. S. Franklin that had been so damaged at Iwo Jima by a kamikaze suicide plane. To stop the fire that it set three chaplains threw their bodies on the burning men to try put out the fire on their bodies and try to save the men’s lives.The chaplains died but they were awarded the Congressional Medal of Honor for their bravery, posthumously.

George was sent back to the states and hospitalized in Norman, Oklahoma. He was back home in Minden on medical leave when the Atom Bomb was dropped, but was to be sent to Philadelphia and active duty.

En route there he heard the news that Japan had surrendered and he arrived in Philadelphia just in time for all the Victory parties. George could not believe he had been awarded the Silver Star, because he thought he was doing what he should do.

His Citation from the United States Marine Corps reads as follows:

In the name of the President of the United States, the Commanding General, Fleet Marine Force, Pacific, takes pleasure
in awarding the SILVER STAR MEDAL to CORPORAL GEORGE A. CALVIT, JUNIOR, UNITED STATES MARINE CORPS RESERVE for service as set forth in the following:

CITATION: “For conspicuous gallantry and intrepidity in action against the enemy on IWO JIMA, VOLCANO ISLANDS, while serving as a rifleman in a Marine rifle company, on 15 March, 1945. While his platoon was in the assault with tank support, CORPORAL CALVIT, on his own initiative, skillfully directed the fire from a tank against an enemy machine gun nest which was holding up his platoon and the company to their left. The heavy mortar, artillery, and small arms fire which the tanks drew had driven off several men attempting to act as guides. CORPORAL CALVIT stood up beside the tank and fearlessly pointed his weapon at the target and fired tracers into it to designate the enemy gun until the enemy fire seriously wounded him. His bravery and determination were in keeping with the highest tradition of the United States Naval Service.”

There were 5,931 Marines killed and 17,372 wounded at Iwo Jima. Of the 21,000 Japanese defending the island only 216 lived to be taken prisoner. If the cost of taking 8 square miles was nearly 28,000 dead and over 17,000 wounded, think what the cost in lives would have been for America to try to invade Japan His answer to the question about should we have dropped the bomb is a decided YES. He saw his friends killed and maimed all around and he knows the terrible price in lives from both sides. That bomb prevented probably a million more lives from being lost.

Juanita Agan submitted a weekly column to the Press-Herald for more than 15 years until her death in 2008. She was a resident of Minden since 1935. The Press-Herald is republishing select articles from Mrs. Agan’s Cameos column.