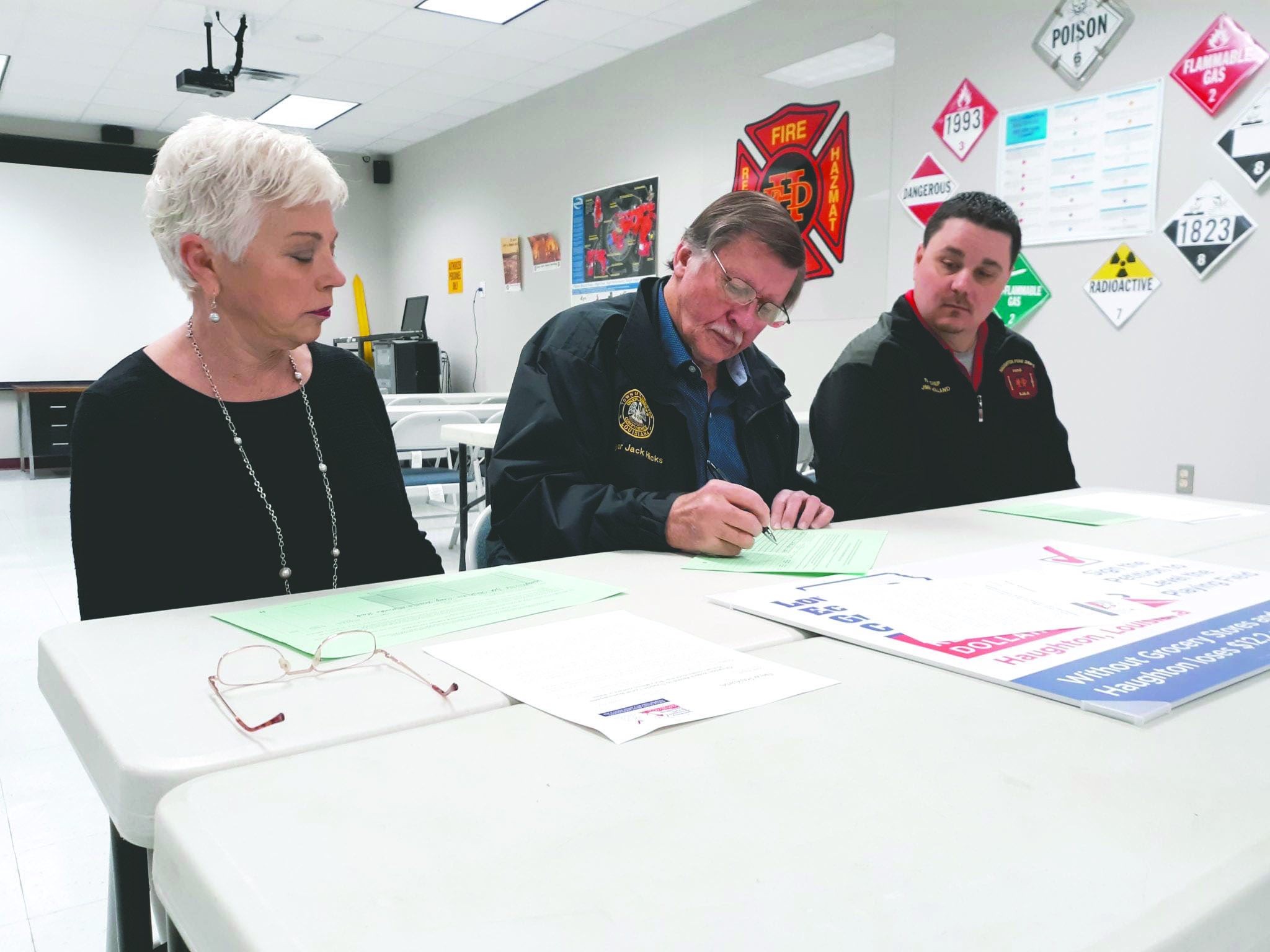 The Town of Haughton’s petition to place a vote regarding additional alcohol sales on the October ballot has taken a step forward.

The town believes it has enough signatures to qualify for the fall election. It has submitted its petition to the Bossier Parish Registrar of Voters for certification that the petition has enough valid signatures to make the ballot.

Petitioners will need to receive signatures of 25 percent of the registered voters in the district, around 580 people. Only those who live inside the city limits are eligible to sign the petitions.

If enough signatures have been verified, the Registrar of Voters will notify the Haughton Town Council that they must call the election for this October.

Shall the sale of beverages of alcoholic content containing not more than six (6) percent alcohol by volume be permitted by package only and not for consumption on the premises?

Shall the sale of beverages of alcoholic content containing not more than six (6) percent alcohol by volume for consumption on the premises be permitted?

Shall the sale of beverage alcohol containing one-half (1/2) of one (1) percent by volume and above for consumption on the premises be permitted?

Shall the sale of beverage alcohol containing one-half (1/2) of one (1) percent by alcohol by volume and above be permitted by package only and not for consumption on the premises?

Shall the sale of beverages of high and low alcoholic content be permitted only on the premises of restaurant establishments which have been issued an “R” permit as defined by law?

A group of the town’s citizens and members of the Louisiana Economic Growth Committee began asking citizens to sign the petition earlier this month. They have the goal of changing the laws that would in turn recruit major grocery stores and restaurants to the area.

Currently in Haughton, only the sale of beer is allowed, which means that grocery stores and restaurants decline locating in the town. This causes Haughton residents to travel elsewhere to purchase groceries or enjoy an alcoholic beverage at a restaurant, and the town loses local sales tax revenue.

“Alcohol sales in a restaurant can be as much as 25 percent of the revenue, so not being able to sell alcohol limits our ability to recruit quality restaurants to Haughton. This is not an issue whether you support consumption of alcohol, it is a decision of where do you want Haughton to go and the economic (future of) our town,” Lea Stroud, chairwoman of the zoning and planning commission for the Town of Haughton, previously told the Press-Tribune.

According to the Business Research Center at Southeastern Louisiana University, Haughton is losing more than $12.2 million dollars annually in local sales to neighboring communities due to the lack of retailers and restaurants that sell alcohol.

“When people drive out of town to purchase groceries or go out to eat, Haughton loses more than $12 million dollars in sales, and valuable tax revenues and jobs.  Those tax monies could be used by city leaders to repair roads, support law enforcement, parks and libraries,” Haughton Mayor Jack Hicks previously told the Press-Tribune.

The Louisiana Economic Growth Committee is a state registered political action committee that has been supported by retailers like Wal-Mart and Brookshires, who recently supported the successful election to allow alcohol sales in Bossier Parish Police Jury District 2.

The petition is being handled by Hatch Consulting Group, an out-of-state firm that specializes in getting alcohol propositions on ballots in areas that are currently dry.