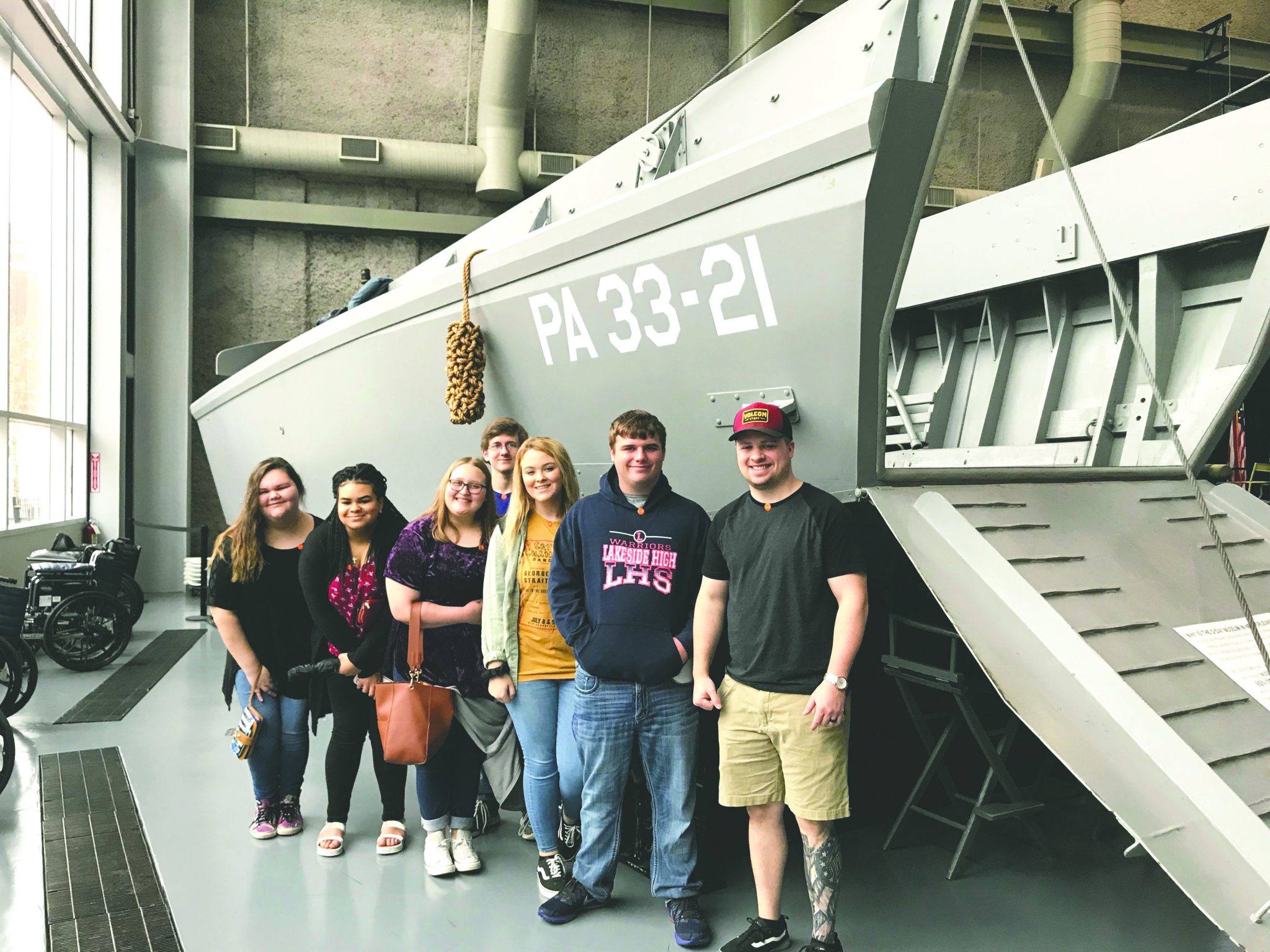 In the Crescent City, resting upon its Magazine Street foundation, there is a building.

Inside this building there are rooms where the spoken word has no power against the visceral reaction that assaults the senses, mists over the eyes, and quickens the pulse. It is in these alcoves where paint spread upon canvas, grainy black and white images of despair and hope along with relics of the many slain on frozen fields or in sweltering jungles tell intimate and personal stories of those who found the courage and strength to accomplish the extraordinary.

It is here, in the recesses of the National World War II Museum, where a group of Lakeside Warriors spent the Friday morning before spring break. It is here where the words of their teachers were brought to life and the sentiments of this nation’s 32nd President were proven true – “We have faith that future generations will know that here, in the middle of the twentieth century, there came a time when men of good will found a way to unite, and produce, and fight to destroy the forces of ignorance, and intolerance, and slavery, and war.”

Thomas Mansfield, a junior honor student and admitted independent studier of American history, experienced a sense of muted reverence as he moved from room to room; his studies in the classroom were brought to life. He said: “Sometimes sacrifices are worth dying for just to know your family or someone else’s family will prosper.”

The museum opened nearly two decades ago and is America’s official archive for the war that claimed some 75 million lives worldwide. It focuses on the contribution made by the United States to Allied victory.

It does its job well.

Logan Cammack, Mansfield’s teacher, has desired to take a group of students south for quite a while. After a dedicated fundraising effort granted that wish, Cammack was more than pleased with the impact the museum made on his current and former American History pupils.

In addition to lessons on the strategies of the war, the mechanics, the metal that moved the front, and the generals who moved the men like pieces on a chess board, the museum told a tale of the human toil and the human toll that was taken against the backdrop of a global conflict.

Scene after scene of human suffering. The innocent. The guilty. The brave. The cowardly. The innocent bystander. Collateral damage. Widows. Orphans.

Elijah Taylor, another Lakeside student, said the museum helped him realize sacrifice can motivate others to follow and achieve a goal. “We can’t isolate ourselves from the world because one day the world will come to us.”

Even though thousands of Americans died in the war they are not forgotten, he said. “They will always be in our hearts and memories and that is why we have the American flag raised and say the pledge. To me, when America finally got in the war to stop Germany it means when other people need help they should be helped even when most people say you shouldn’t.”

Karli Gotshall, Eli’s classmate, won first place in an easy contest earlier this year where she detailed the physical and mental pain veterans experience after a war. The points she made in her work focused on modern men and women of the Armed Forces; however, the links she made trace back to the fight against the Axis and time immemorial.

On a sign black as sable, placed in one of the rooms, there is a seemingly simple statement made long ago by an Army psychologist. The white lettering tells a story.

It reads: “Practically all men in rifle battalions who are not otherwise disabled ultimately become psychiatric casualties.”

Karli said this statement, made 80 years ago, shows the horrors of war never leave the men who endure its savage grip. Death is the only relief.

“I’ve been to Europe where I toured the Dachau concentration camp,” she remembered. “It was so sad how so many could suffer just because someone thought they were different. And to see what are our veterans went through to save the world was just as powerful. Just from what the museum showed us, I can’t imagine the pain the heroes who came home had. I know it was so much worse than the pictures.”

Dachau was the first concentration camp launched by the Nazis. It sits in southern Germany and housed political prisoners, Jews, homosexuals, Jehovah’s Witnesses, Catholic priests, Communists, Romani, and any others deemed inferior by the Third Reich.

Some 200,000 resided within its walls and prisoners lived in constant fear of brutal treatment and terror detention including standing cells, floggings, the so-called tree or pole hanging, and standing at attention for extremely long periods. There were 32,000 documented deaths at the camp and thousands that are undocumented.

Approximately one third of the prisoners were sick at the time of liberation.

This is what Americans, Canadians, Russians, the British and other nations fought against. And those who were not fortunate enough to return home, to live through its aftermath and have the horrors repeat (if one can call that luck), remained committed to the effort.

Their life, precious to others, was worth sacrificing in their own eyes. “I am living on borrowed time. If I don’t come back, try not to take it too hard,” reads a letter from Pvt. Ken Webster of the 506th Infantry Division. “I wish I could persuade you to take death as casually as we do over here. In the heat of battle you expect casualties, you expect someone to be killed, and you are not surprised when a friend is machine-gunned in the face. You have to keep going. It’s not like civilian life, where sudden death is so unexpected.”

He was writing to his mother. The letter is displayed on the museum’s second floor in the southern wing.

When his mother wrote back to express her concern, Webster responded: “Would you rather have someone else’s son to die in the mud? If all the country had your attitude no one would fight. And what kind of country would that be?”

Webster survived the bullets, the bombs, the blistering cold of winter in Europe. His struggle and that of his brothers was told in the iconic HBO series Band of Brothers.

And that is what Lakeside’s American History teacher wanted his students to understand, to witness, to remember.

“This war was a long time ago,” Cammack said. “It’s not relevant to them. It’s the same as a movie to them. I hope it’s not that way anymore.”

If you happen to find yourself down New Orleans way, stop in and sit a while near that shrine to American bravery next to the Mighty Missisip’. When you walk the halls, put away your phone. Try to move away from the crowds (admittedly easier said than done), and think. Open your mind. Open your heart. Empathize and realize. Freedom is not free. It’s price has been paid on blood-stained fields around the world.

America answered the call then. Let us all hope we will always do the same.