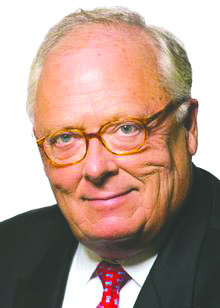 Here’s a perspective check for you: When I first came to Washington, D.C. more than 50 years ago, the big question when it came to schools was “Should the federal government have any role in financing education?”

How times have changed. Fast forward to 2019, and the question now is, “How large a role should the federal government have in financing education?” And the default answer is apparently “bigger”.

Suggest that maybe we should reconsider that role – or at least trim the budgetary fat when it comes to schools and the federal government – and the reply is a predicable bit of political demagoguery: What do you have against education? Don’t you want our children to have good schools? And so on.

So you can imagine how President Trump’s opponents reacted when the budget he proposed last month called for a $7.1 billion cut for the Department of Education.

If that sounds like a lot, consider the fact that it’s a 10 percent reduction from 2018 levels. We’ve spent $2 trillion (that’s “trillion” with a “t”) on education programs since 1965. And if you combine federal, state and local K-12 spending, that jaw-dropping number is just a fraction of what’s been spent.

It would be one thing if this enormous infusion of money made some measurable differences when it comes to student gains. But as education experts Lindsey Burke and Mary Clare Amselem note in a recent article, the gaps between upper-income and lower-income student is as wide as ever.

This is backed up by new research by Paul Peterson of Harvard University, Ludger Woessmann of the University of Munich, and Eric Hanushek and Laura Talpey of Stanford University.

“Toward the beginning of the War on Poverty,” Burke and Amselem write, “14-year-old students from the poorest families were three to four years behind those from more affluent families. But unfortunately, researchers concluded that current efforts rooted in federal programs and spending have not reduced this socioeconomic gap in education achievement.”

If these efforts were more recent, it might be reasonable to wait and give them time to work. But when good money has been thrown after bad for years, if not decades, you have to ask yourself whether the programs you’re funding even work.

Take the 21st Century Community Learning Centers Program. Trump’s budget would eliminate it – and its $1.1 billion price tag. As well it should: There’s no evidence that this 25-year-old program even works.

Trump’s budget would also cut $2.1 billion from teacher development programs. Again, though, there’s no evidence that the money spent so far has made any positive difference for students.

And besides, teacher development is a state and local responsibility, not a federal one. Let’s not forget the incentives at work here. Many things that ought to be funded at a lower level of government wind up on the national tab – mostly because the Feds are the ones waving the big checkbook around.

Trump’s budget also proposes other sensible cuts. Take the interest subsidy on student loans, which delays interest accruing on a student’s loan until after graduation. According to the Congressional Budget Office, eliminating it would save taxpayers $23.4 billion over the next decade. Even better, it “will help end distorted lending policies that have led to rampant college tuition inflation,” Burke and Amselem write.

The burden of proof, though, shouldn’t be on the White House to defend these cuts. Proponents should explain why spending levels should stay the same.

Of course, to do that, they’d have to be able to point to evidence that these programs actually work. And that’s something they can’t do.

It’s time to show we’ve learned our lesson when it comes to education spending. The best thing we can do for our children is stop letting Uncle Sam run the classroom.

Ed Feulner is president of the Heritage Foundation.

This is an ideal time begin discussions, discover the possible hurdles, negotiate in an open and candid manner, and make a bilateral FTA a reality. Then the Taiwan–U.S. partnership for freedom will play a more important role in shaping American policy toward China — and in securing American interests throughout Asia.

Ed Feulner is president of the Heritage Foundation.