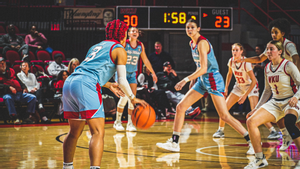 The Hilltoppers held LA Tech to 36 percent shooting (19-53) while knocking down 42 percent of their own attempts, going 26-62 from the floor.

Neither team could find much consistency in the second, but Tech was able to shave one point off the WKU lead thanks to two late free throws from Roberson, sending the teams into the halftime locker room at 33-25.

The third quarter offered more of the same, with back-and-forth spurts until the final 90 seconds, with WKU finishing on a 7-1 run to expand their lead to 15, 51-36.

Tech finally found some rhythm in the fourth quarter, putting together an 8-0 run on back-to-back threes from Gabbie Greenand Silvia Nativi, followed by a jumper from Mackenzie Wurm to cut the lead back to ten (59-49) with 4:37 remaining, but WKU answered right back on the next possession.

Tech would throw one final surge at the Hilltoppers, cutting the lead to seven with 1:44 to play off six quick points from Keiunna Walker but could get no closer. Walker scored a game-high 16 points to go with five rebounds. Roberson added eight points and eight rebounds in her return.

QUOTABLES
Head Coach Brooke Stoehr…
“I didn’t think we were very good defensively early, and then we couple that with missing shots, they got some separation getting up by nine. I thought we defended better in the second and third quarters and cut into the lead, but then we’d have a turnover. You have to be poised when you play on the road, especially in a place like this.

We had some really good energy this week, and it was disappointing how we came out tonight, and we couldn’t recover from that. We did have a shot at the end when we cut it to seven with a chance to get the ball back but don’t grab a loose ball. It was a frustrating night, for sure. You can’t feel sorry for yourself, though. We have to go play the best team in the league on Saturday, and we knew this would be a tough week.”