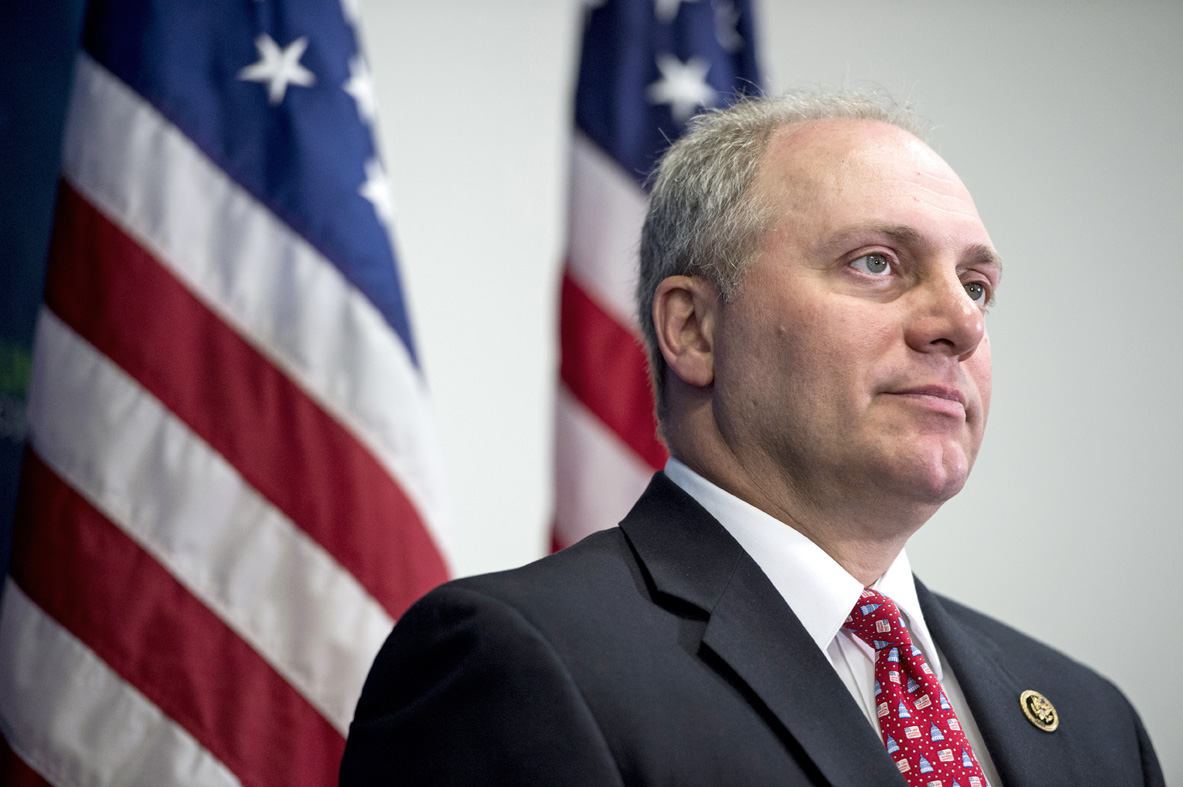 ALEXANDRIA, Va. — A rifle-wielding attacker opened fire on Republican lawmakers at a congressional baseball practice Wednesday, wounding House GOP Whip Steve Scalise of Louisiana and several others as congressmen and aides dove for cover. The assailant, prepared with “a lot of ammo,” fought a gun battle with police before he, too, was shot and later died.

Scalise dragged himself off the infield leaving a trail of blood as colleagues rushed to his assistance.

The shooter was identified as James T. Hodgkinson, a 66-year-old home inspector from Illinois who had several minor run-ins with the law in recent years and belonged to a Facebook group called “Terminate the Republican Party.”

Shortly after the shooting, Bernie Sanders, the former candidate for the Democratic presidential nomination, said on the Senate floor that the shooter apparently was a volunteer for his campaign last year. Sanders said he denounced the violence “in the strongest possible terms.”

Capitol Police officers who were in Scalise’s security detail wounded the shooter, who was taken into custody. He later died of his injuries, President Donald Trump told the nation from the White House.

“Everyone on that field is a public servant,” Trump said. “Their sacrifice makes democracy possible.”

Scalise, 51, the No. 3 House Republican leader first elected to the House in 2008, was in stable condition and undergoing surgery. The popular and gregarious lawmaker is known for his love of baseball and handed out commemorative bats when he secured the No. 3 job of House whip several years ago.

Texas Rep. Roger Williams, who coaches the GOP team, said that one of his aides, Zack Barth, was shot, but “is doing well and is expected to make a full recovery.” Two Capitol Police officers were also injured but were expected to recover, along with a former congressional aide who was hospitalized.

Rep. Jeff Duncan of South Carolina said he had just left the practice and encountered the apparent gunman in the parking lot before the shooting. The man calmly asked which party’s lawmakers were practicing and Duncan told him they were the Republicans. The man thanked him.

The gunman had a rifle and “a lot of ammo,” said Sen. Jeff Flake of Arizona, who was at the practice.

The shocking event left the Capitol horrified and stunned. The House canceled proceedings for the day. Speaker Paul Ryan of Wisconsin and Democratic Leader Nancy Pelosi of California both spoke on the floor issuing calls for unity. “An attack on one of us is an attack on all of us,” Ryan said.

The shooting occurred at a popular park and baseball complex in Alexandria, Virginia, where Republican lawmakers and others were gathered for a morning practice about 7 a.m. They were in good spirits despite the heat and humidity as they prepared for the congressional baseball match that pits Republicans against Democrats. The popular annual face-off, which raises money for charity, is scheduled for Thursday evening at Nationals Park across the Potomac River in Washington, and will go forward as planned.

The team was taking batting practice when gunshots rang out and chaos erupted.

Scalise was fielding balls on second base when he was shot, according to lawmakers present, then dragged himself into the outfield to get away from the gunman.

Rep. Mo Brooks, an Alabama Republican, said his colleague “crawled into the outfield, leaving a trail of blood.”

“We started giving him the liquids, I put pressure on his wound in his hip,” Brooks said.

Texas Rep. Joe Barton, still in his baseball uniform, told reporters a shooter came out to the practice and opened fire, shooting at Rep. Trent Kelly, R-Miss., who plays third base.

Barton said the shooting lasted 5-10 minutes, and there were dozens or more of shots fired.

“It was scary,” Barton said.

Lawmakers took cover in the dugout. Barton said his son, Jack, got under an SUV.

Texas Rep. Mike Conaway, who was at the game, described what sounded like an explosion, then lawmakers scattering off the field as police roamed in search of the gunman and engaged him.

“The guy’s down to a handgun, he dropped his rifle, they shoot him, I go over there, they put him in handcuffs,” Conaway said, adding that if the shooter had “gotten inside the fence, where a bunch of guys were holed up in the dugout, it would have been like shooting fish in a barrel.”

FBI special agent in charge Tim Slater said it was “too early to say” whether it was an act of terrorism, or whether Scalise was targeted.

Speaker Ryan identified the wounded Capitol Police officers as David Bailey and Crystal Griner. Also wounded was former congressional aide Matt Mika, who now works for Tysons Food in its Washington office. Mika’s family said the lobbyist was shot multiple times and was in critical condition and in surgery.

After the gunfire stopped, Sen. Flake, of Arizona, said he ran onto the field and also tried to come to Scalise’s aide. After medical personnel arrived, he said he retrieved Scalise’s phone and made the first call to Scalise’s wife to notify her of the shooting. He said he did so to ensure that Mrs. Scalise would not find out about the shooting through the media.

Falisa Peoples was just leaving the YMCA next to the ball field when she saw the shooter open fire.

“He was just very calm. He was just walking and shooting,” she said of the man, whom she described as white and wearing a T-shirt and shorts. She said he was using a long gun and exchanging fire with law enforcement officers, one of whom yelled for her to get down.

Lawmakers were stunned in the aftermath of the event, which raised questions about the security of members of Congress. While the top lawmakers, including Scalise, have security details, others do not and regularly appear in public without protection. The last time a lawmaker was shot was when Democratic Rep. Gabby Giffords of Arizona was hit in the head and grievously injured while meeting with constituents at a supermarket parking lot in 2011.

Following the Giffords shooting, lawmakers have held fewer open town halls and have been advised to increase security at such events.