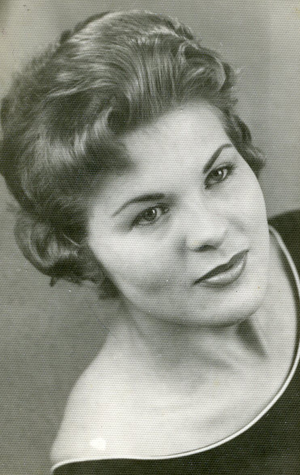 Judy Rabb Adams was 73 years old when she passed away on Jan. 12, 2016. She was a resident of Leslie Lakes Assisted Living Center in Arcadia. She was born in Lake Providence in 1942.

During her years at Minden High School, Judy was an active and popular student, In a newspaper article from that time entitled “Hall of Fame,” her many honors were listed.

Among these were Homecoming Princess, Co-editor of Tide Talk, Representative and Treasurer of Student Council, Class Secretary, President of Future Homemakers of America, and Who’s Who in Home Economics and Business Education. She served as Class Officer from 57-60, FHA from 58-60, and Parish Officer. At the LSU Leadership Conference, she was a feature editor on the “Leadership Voice.”

She was a reporter for the Dramatics Club and was Marching Captain of the Pep Squad. At First Baptist Church, she sang in the Teen Tone choir and participated in Life Service Union and Morning Watch Services. She was also in the Beauty Review. Judy was admired for her artistic talent as well. In the article, she is quoted as having, “a friendly, unselfish disposition” who possessed “all the qualities of leadership. Tall and stately, Judy is admired by many friends.”

Her bright and promising future was disrupted by the onset of schizophrenia when she was 29. The following decades consisted of the family’s ensuring she received proper care and treatment. While there were many difficult years, by the end of her life, her condition was quite stabilized and she was able to talk easily and enjoy herself with others. The attendants at the assisted living center knew her as “Miss Judy.” While providing her with consistently quality care, they knew her well enough to trade affectionate banter with her, creating a warm and friendly atmosphere.

She had a mischievous sense of humor and smile, often entertaining family with her colorful conversation and sly jokes, delivered with a twinkle in her eye. To our delight, she also began sketching again in her last year of life.

Her greatest joy in life was being a mother and grandmother. She married Billy Don Adams when she was 18 in 1960. With him she had her daughter Kimberly Adams Silva, 53, who lives in Pawtucket, Rhode Island along with her husband Manny. Her son from that marriage, Kevin Tyler Adams, 53 resides in Destrehan, along with his wife, Keiko. Damian Paul Salinas, 28, Judy’s grandson and Kimberly’s son, resides in Savannah, Georgia.
Judy’s parents were Mr. and Mrs. Jesse and Dorothy Rabb who preceded her in death.

She has a surviving sister, Rose Hardy residing in Minden along with her husband , Gay. Her brother, John Kenneth Rabb resides in Naperville, Illinois with his wife Lois.

In lieu of flowers donations may be made to the NAMI, National Alliance for Mental Health.

Funeral services will be at 11:30 a.m., Saturday, Jan.16, 2016 at Rose-Neath Funeral Home Chapel in Minden with the Rev. Bill Crider officiating. Interment will follow at Minden Cemetery in Minden. The family will receive friends Saturday, Jan. 16, 2016 at 10 a.m. before service.

Pallbearers will be Thomas Terral, Danny Terral and Patrick Williams.