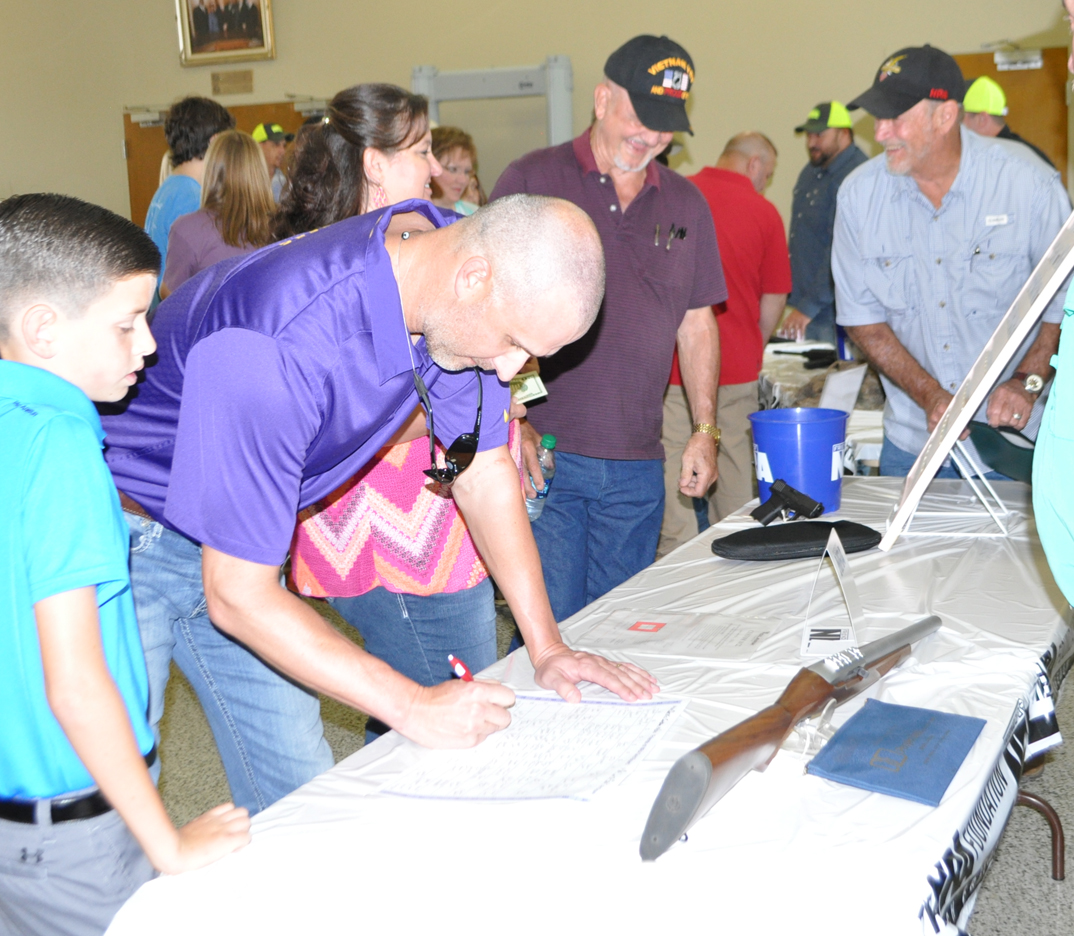 The Kisatchie Friends of the National Rifle Association had another good year as they raised approximately $56,000.

The gun of the year, a Montana Rifle American Legends .300 Winchester Mag Rifle, went to Minden Police Chief Steve Cropper, selling at auction for $1,900. Other auction items included a variety of rifles, pistols, knives, an NRA blanket and beautiful artwork.

Phillip Krouse, Kisatchie NRA chair, says the annual banquet and fundraiser is to raise money for youth shooting sports and to promote and teach gun safety. It also helps with gun purchases, skeets and training materials, he said.

“In the last three years, the money’s been going to build the shooting range for the kids out by the landfill north of Dixie Inn,” he said. “The Webster Parish Police Jury donated the land and the 4-H has been developing it. In a couple of years, they’ll finish it up.”

He explained that a large percentage of the money raised comes back to Webster Parish for projects such as the shooting range. The NRA provides grants to nonprofits such as 4-H which promotes youth shooting sports and gun safety.

Bobby Morgan, Kisatchie NRA co-chair says the biggest seller each year is the gun of the year.

Chris Bowen, NRA regional director, says there are three arms to the NRA, the NRA Foundation, the fundraising arm, the NRA legislative arm, which works with legislators on gun issues and the NRA.

Krouse dispelled some of the myths about the NRA, saying the organization, especially in Webster Parish, is more about teaching children gun safety. Many of its members are hunters, he said.

“A lot of our members are hunters and they have to protect their home too,” he said. “They raise their kids to hunt. When something bad happens in their home, and a young person is accidentally shot, that’s where the negativity starts coming in. Of course, when you have a mass shooting somewhere, it’s always the gun’s fault. It’s never that person. Are you going to take all the cars away from people that are driving drunk?”

Morgan says this is why they begin training kids as young as age five. Krouse says while the NRA itself does not teach courses on gun safety, they promote those who do, such as through 4-H and the Louisiana Department of Wildlife and Fisheries through the hunting safety courses.

Bowen says they don’t just give grants to youth. Many law enforcement agencies receive grants or nonprofit shooting ranges. He says this year, some of the grants awarded may be going to help some of the ranges that were flooded.

“It’s an awesome deal if you want to keep shooting sports alive and raise up a generation of shooters, this is the place to be,” Bowen said of the fundraiser. “It’s a good deal.”