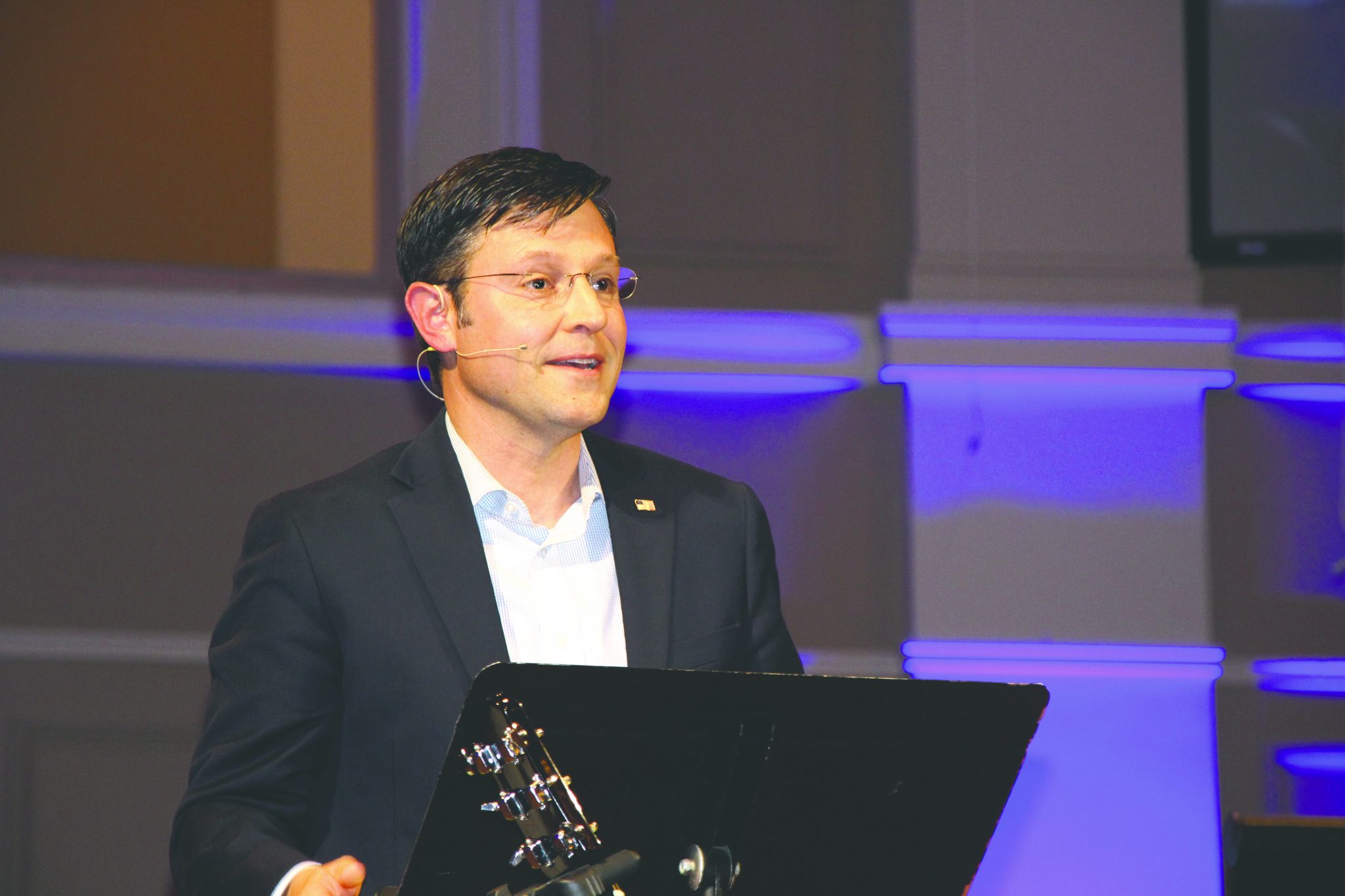 Partially in response to ongoing litigations against the Webster and Bossier Parish School Boards, Louisiana Attorney General Jeff Landry and U.S. Representative Mike Johnson published the Student Rights Review in January, a reminder to students of their rights to religious expression. Sunday afternoon, these men visited Minden to convey this reminder to students personally.

Two Freedom Student Summits, held at First Baptist Minden and the Bossier Parish Community College, were held to educate students, parents, and community members on what religious expression is constitutionally protected within the public school system.

“There’s so much misinformation and confusion about these very issues,” Johnson said. “But the Student Summit was a great opportunity to get everybody together and talk about what our rights are.”

The event was preceded by a prayer walk from the Minden Civic Center to First Baptist. When the crowd arrived, Landry and Johnson addressed attendees about the history and current climate of student rights. Three of Johnson’s children led the audience in worship songs, and two students in Webster Parish schools spoke briefly about Christian student groups such as the Fellowship of Christian Athletes and First Priority.

Johnson, a former Constitution attorney, spoke in detail for close to half an hour, outlining the history of religious expression rights in America and where they are headed. He said his goal was to answer three key questions:

To answer the first, Johnson cited several documents from the time of the Founding Fathers, including the Declaration of Independence, the Northwest Ordinance, and, most famously, the First Amendment, which says in part, “Congress shall make no law respecting an establishment of religion, or prohibiting the free exercise thereof.”

“Those first two phrases, we call them religion clauses, are what all the legal skirmish is about today,” he said.

“These are the two competing – I would call them compatible – religion clauses in the First Amendment. Notice here that it doesn’t say the words ‘separation of church and state.’”

Johnson said this popular term is often taken out of context. It is not found in the Constitution, but rather in a letter from Thomas Jefferson to the Danberry Baptist Association in January 1802.

Johnson later described cultural shifts that he said led America away from the intentions of its founders in this area. He claimed these shifts have been helped along by organizations like the American Civil Liberties Union, the same group currently embroiled in a religious lawsuit against the Webster Parish school system.

“There have been a number of secular organizations over that time, the ACLU lead among them, who have been working very hard to spread confusion,” he said. “They have been working to convince everyone that separation of church and state is a constitutional principle, that religion is something separate to be kept in a box and not part of the conversation, not out in the public square, not part of who we are as a country.”

He said the outcome of such movements can be most clearly seen in the younger generations.

“Now they’ve created a whole generation of Americans who have some sort of allergic, knee-jerk reaction to all things religious. It’s a campaign of fear and intimidation, misinformation, and it leads to all sorts of chaos. It’s led to lawsuits like we have in Webster and Bossier right now.”

Despite these challenges, Johnson said students’ rights have never been lost. He began to speak in detail about what students and even teachers are allowed to do on campus in regards to religion and what they are not.

“First, you have to have government neutrality,” he said. “The government cannot be involved in advancing religion in the public. I don’t think that follows what the founders believed, but that is the law of the land now and has been for decades. The school district cannot be favoring religion, but they cannot be showing hostility to religion either.”

“Unless it’s disruptive to the school day, your kids can still engage in religious speech and be the salt and light on campus,” he said.

Students can pray, read their Bibles, and talk openly about their faith during any non-instructional time at school. Johnson said in any situation where it would be appropriate to pull out “Harry Potter” and read it, it would also be appropriate to read the Bible. In addition, if a school recognizes any student clubs, they must also allow religious clubs and treat them exactly the same.

The ACLU and others like them claim that public schools in Webster and Bossier Parishes are going beyond their constitutionally protected rights and stepping on the religious rights of those with different beliefs. As his time concluded, Johnson told the audience to avoid proving these groups right.

“The Christian is called to respect all,” he said. “We don’t do this in a caustic manner. All men are created in the image of God, and that means every single person has inestimable dignity and value. Fearing God means we do not misrepresent Him before men. God never forces himself upon anyone, and Christianity by its very definition should not be forced upon anyone.”

Johnson said this principle must extend to how Christians conduct themselves in the courts and in politics.

“Christians should never advocate for the censoring or silencing of opposing viewpoints,” he said. “Remember that, because a lot of Christians get this wrong.”

The spreading of awareness for student religious expression will continue today as students across northwest Louisiana will draw a blue line on their hand and post photos to social media, representing the “I Stand with Bossier” and “I Stand with Webster” sister movements.

Audience members were given the chance to write down questions for Johnson and Landry, some of which they answered in a segment near the end of the event. One question read, “Why do you think prayer is under attack?”

“There are those who worship the great false god, and that’s the government,” Landry said. “And prayer scares them.