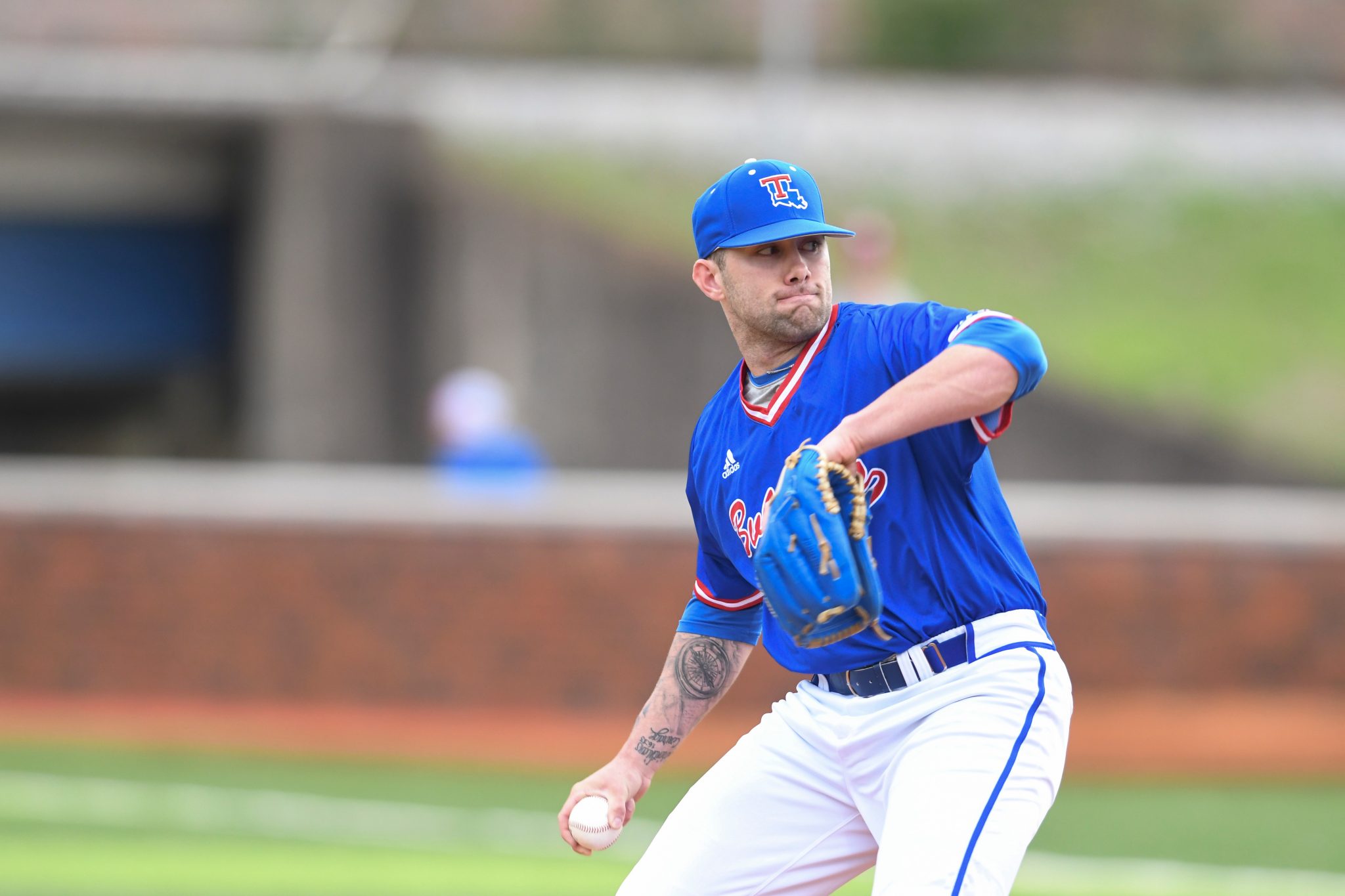 RUSTON, La. – The Louisiana Tech baseball team held on and captured a 3-2 Conference USA victory over the visiting UAB Blazers on Friday evening from J.C. Love Field at Pat Patterson Park in front of 1,281.

LA Tech (15-10, 3-4 C-USA) and closer Braxton Smith faced late pressure from the Blazers (12-15, 1-6 C-USA) in the top of the ninth inning. Smith, working on his second inning in relief, gave up a leadoff double to dead center field to shortstop Tyler Tolbert, who then moved to third, with just one out after a successful sac bunt.

The ensuing batter, pinch hitter, Christian Waltman, struck out swinging. The ball bounced in the turf, and as Tech catcher Chris Clayton threw to first to complete the putout, Tolbert broke for home, attempting to steal the tying run. However, first baseman Mason Mallard recognized the situation and threw back home to Clayton, who snared the short hop and swiped the tag on Tolbert, completing the game-ending double play.

“We really needed a Friday night win, and I couldn’t be more proud of our guys for stepping up tonight,” head coach Lane Burroughs said. “Matt Miller gave us an outstanding quality start for the second week in a row, and got stronger as the game went on. Griff (Kyle Griffen) did his job and got those lefties out, and then we called on Braxton to come in and close it out. What can you say about those blocks by Chris Clayton there in the ninth? Those were big-league blocks back there. He comes out every day and works on his craft – those were absolutely crucial plays for us at the end there.”

The Bulldogs saw another solid start from senior captain Matt Miller (3-0), who picked up his third win of the year. The right-hander struck out a season-high eight batters, while allowing just two runs through his 6.1 innings pitched.

The Tech offense jumped on UAB starter Graham Ashcraft (1-3) early on, scoring single runs in each of the second, third and fourth innings. The Bulldogs opened the scoring with an RBI single from Tanner Huddleston in the second, and then added another via an RBI single to right center from Mason Robinson in the third.

The Blazers got on the board in the top of the fourth, after Miller walked the bases loaded to begin the inning. UAB then got a sac fly to center from Ian Ladner, and an RBI single to center from Tolbert, tying the game at two. However, Miller limited the damage and got a pair of strikeouts to keep the game tied at two.

Tech wasted no time in getting the lead back in the bottom of the fourth, via an RBI single to center from Mason Mallard, pushing the home team in front, 3-2.

Ashcraft was tagged with the loss, as the hard-throwing right-hander went 5.1 innings, while giving up three runs (two earned) on six hits. Ashcraft struck out four and walked four.

Tech shortstop Taylor Young continued to be catalyst at the top of the order, reaching base four times (three walks and a single), while scoring a run. Mason Robinson collected his team-best 14th multiple-hit game of the season after a 2-for-4 effort at the plate.

Junior reliever Kyle Griffen made his team-leading 15th appearance of the season, and worked a scoreless inning, while not allowing a baserunner. Smith picked up his team-best fourth save of 2019.

The Bulldogs and Blazers will resume the three-game weekend series on Saturday with a first pitch set for 12 p.m. from J.C. Love Field.