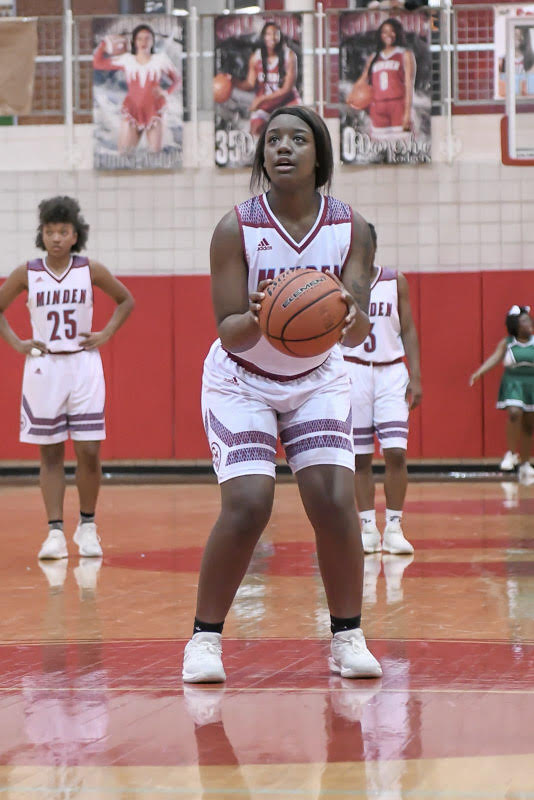 The Minden Lady Tiders have advanced to the semifinals of the state playoffs for the first time in 18 years with their 66-58 win over DeRidder on Thursday night at The Palace.

“What a game, what a special night,” Minden head coach Jacob Brown said. “I can’t thank our community enough for the environment they created for our girls to play in.”

With the win, Minden advances to the Top-28 in Alexandria where they will take on #2 Warren Easton at Rapides Coliseum.

DeRidder  started the game on an 8-0 run after Bre Rodgers hit a three to put Minden on the board.

The Tiders settled into the game and trailed 16-14 after the first quarter.

The Lady Dragons stymied Minden with a 1-3-1 zone that packed into the paint, forcing outside shots from Minden that weren’t falling early.

“I thought we were forcing quick shots,” Brown said. “One pass, shot. We struggled to get into the flow.”

The Lady Tiders started to get stops on defense and got out in transition before taking a 25-23 lead into halftime.

“We did a great job of managing the clock and holding for the last possession so we could take a lead into halftime,” Brown said. “Being up at the half is a confidence boost.”

As the girls came out of the halftime break, Brown was talking to guard Janiya Reed as Reed’s facial expression changed.

I wondered what Brown told her, that is, until Reed came out in the third quarter on an absolute tear. Every time she touched the ball, she was determined to get to the basket.

“Janiya got us going by attacking the rim and scoring,” Brown said. “Our girls got in an offensive rhythm after that.”

Minden’s inside scoring opened up opportunities from beyond the arc.

As the Tiders started draining threes, the Minden faithful erupted and The Palace was rocking.

“The crowd made it a special environment for our girls to play in,” Brown said.

Destini Powell hit three of her five second-half threes in the third quarter, including one at the buzzer to put the Tiders up 46-38 heading into the fourth.

LSU-signee Domonique Davis scored 18 of her 40 points in the fourth quarter, but it wasn’t enough as Minden stayed calm and composed and held on for the win.

“Bre Rodgers hit some key shots and free throws in the fourth,” Brown said. “Destini hit two more threes in the fourth quarter as well. Each player compliments each other.”

Derrica Gilbert had 18 points, but arguably was more important on the glass.

She seemed to come up with every big rebound down the stretch and made a handful of clutch hustle plays including a steal in the fourth on an inbound.

Powell had 15, all on three-pointers and all in the second half. Reed had 15 as well.

“We were balanced scoring, and I thought we had an opportunity to create separation throughout the ball game, but that’s the playoffs,” Brown said. “We had to be ready for a battle, and our girls were. They competed. It was a special night.”

Tayler Banks scored three points for the Tiders, but Brown said that Banks’ value can’t be found only in a scoresheet.

“She took two huge charges for us,” Brown said. “She sacrificed her body in the biggest moments. You don’t see that in the stat book, but when you have a player like that, you can win big. Plays like that are what makes a team go.”

The date and time for Minden’s game against Warren Easton will be announced this week.