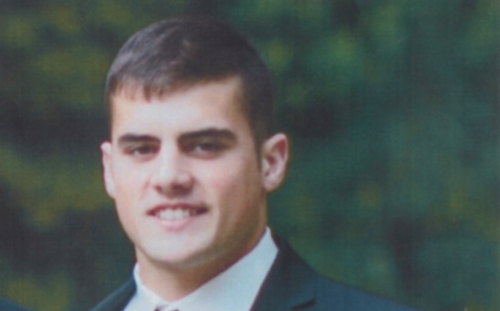 A Lakeside athletic great has been offered a rare opportunity to attend a prestigious school offered to very few across the country – and he’s the first from Lakeside High School to be accepted.

Senior Thomas Lambert, 18, has been appointed to the U.S. Naval Academy in Annapolis, Maryland with a full ride academic/athletic scholarship. Only six percent of roughly 25,000 applicants make it into the school that will make him an officer in the military. Lambert is in that six percent.
Lambert is excited about the prospect, he says, adding his family history was an inspiration in his decision.

“I’m excited and nervous at the same time,” he said. “I had a great uncle that graduated from there in 1935, and he’s the reason my interest piqued to go to Annapolis.”

Lambert, the son of Scott Lambert and Kristi Lacoy, says he’d like to major in “some type of engineering,” and when he graduates after five years of school, he will do so as an officer in the military – either as an ensign in the Navy or a second lieutenant in the Marine Corps.

Lacoy says she’s proud of her son and his accomplishments. A former teacher with the Webster Parish school system, she knows the importance of education. Her son has at least a 4.0 grade point average and has excelled in every sport he’s played at Lakeside – football, baseball and wrestling.

Coach Bob Gray, who coached Lambert in baseball, says it’s been a privilege to coach such a fine young man.

“It’s been an honor and a privilege to teach skills to a young man of such caliber,” Gray said. “He’s top notch. He’s intelligent. He’s motivated. As far as his athletic ability, he’s a super athlete. He’s the kind of kid we’ve always based our program on. Those kind of people have helped us win a lot of ball games and it appears that Thomas is one of them.”

Lambert has a cumulative 4.0 grade point average and is a member of the National Honor Society. Last year, he won the honesty and integrity award, and he was runner up in the annual scholars competition.

Principal Johnny Rowland says it an honor to see one of his students earn such an accomplishment.

“That is a tremendous, tremendous accomplishment,” he said during the ceremony. “I can’t think of a more honorable thing to do than to attend a service academy and then to give five years of your life minimum to serving your country.”

Rowland says Lambert told him he wanted all of his teachers and coaches at the ceremony, giving them recognition, because they all played a part in where he is today.

The U.S. Naval Academy is the second oldest military education institution, established in 1845. West Point is the oldest military academy, which trains and educates men and women in the U.S. Army.

According to Rowland, the scholarship Lambert received is worth about $450,000.

“He’s a true leader in this school,” Rowland said. “We encourage the kids to come to school, get involved and do the best you can. We are grateful we have so, so many students who do that. So many times in education, I feel, we don’t spend enough time celebrating achievements, the great things that so many of our kids do.

This is why today is so special. This day is special for all of us.”