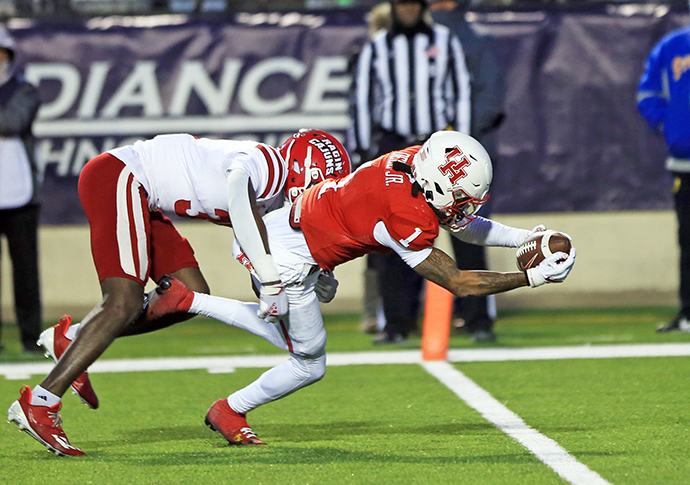 The touchdown came on a 12-yard pass from Clayton Tune to Nathaniel Dell. It capped a six-play 92-yard drive that started with 2:59 left to play.

It also completed a Houston rally from a 16-6 halftime deficit.

The game was played under sunny skies with temperatures in the mid-20s. That kept the crowd down but with the chill covering a large part of the nation likely meant a large television audience.

“I just commend our guys for having a never quit attitude and they were resilient in creating a pretty special memory you know, which is winning a bowl game like this,” he said.

“I like the Independence Bowl and these guys do a phenomenal job. This is a really good bowl game. Hospitality is first class, the people are first class. Food was great. You know, and then the game was equally as great as well.”

On the game-winning touchdown, Hill was wide open at the 4. He dove and stretched the ball into the end zone.

“That is exactly the way I would’ve scripted it,” Tune said. “I saw the coverage and Tank (Dell) out there. We had a play called out for him but I saw leverage for a better route and he did too. I had all the faith in him that he was going to catch the route, make a move, and get in the endzone. It was an easy decision for me. I just put it out there and let him do the rest.”

Said Dell: “Before the play happened, I gave Tune that look like I want the ball. We just set it in motion for me to get it.”

Tune ran 33 yards on the drive’s first play. But consecutive holding penalties moved the ball back to the 21.

On first down, Tune completed a 41-yard pass to KeSean Carter to the Cajuns 38. Two plays later, he ran 15 yards to the 12. The TD pass came on the next play.

Tune completed 18 of 28 passes for 229 yards and three touchdowns. Carter had three catches for 104 yards. Dell had six for 44 and two TDs.

Louisiana, which led 16-6 at the half, missed some opportunities in the second half:

After a 22-yard punt, the Ragin’ Cajuns took over at the Houston 45 with 5:46 left and the score tied. They got one first down but were then forced to punt.

After Houston tied it at 16 on a 19-yard field goal with 13:40 left in the game, Louisiana drove from its 21 to a first-and-goal at the 9. But Chris Smith fumbled and the Cougars recovered at the 4.

“We had a chance to win in the end,” Desormeaux said. “Make a couple of mistakes down there in critical situations and it costs you a win. But I’ve never been more proud of this group than I am right here. I’m proud to be their coach and I’m excited to see what the future holds for them because I know they’ve got great things ahead of them.”

Houston went 70 yards on its first second-half drive to get within three on a 2-yard pass from Tune to Dell.

The Cougars recovered a fumble at the Cajuns 36 but couldn’t take advantage. Brandon Campbell was stopped for no gain on fourth-and-1 at the 5.

Houston forced a punt from the 15 that Peyton Sawyer returned to the Cajuns 33. The Cougars had first-and-goal at the 2 but had to settle for the tying field goal.

Louisiana got off to a fast start, going 75 yards in 15 plays for a touchdown on its first drive. The Cajuns converted a fourth-and-2 from the Houston 30 on a 10-yard pass from Chandler Fields to Johnny Lumpkin. Four plays later, Fields completed a 4-yard pass to Lumpkin for the TD.

Louisiana extended the lead to 13-0 on two 42-yard field goals by Kenneth Almendares in the second quarter.

“The bottom line is that you’ve got to put points on the board when you have those situations and you can’t settle for field goals,” Desormeaux said. “We settled for field goals a couple of times in the first half.”

Houston finally got going offensively, scoring on a nine-play 80-yard drive. Tune hit Carter for 33 yards and touchdown with 3:00 to play in the half.

The Cajuns then drove from their 12 to the Cougars 6. Almendares kicked a 32-yard field goal with 2 seconds left.

“You know now that’s a credit to our defense holding them to field goals in the red zone,” Holgorsen said. “It’s something that we focus on.”

Fields completed 17 of 25 passes for 169 yards before suffering an injury. Zeon Criss replaced him and led the Cajuns on the drive that ended with Smith’s fumble.

Smith led the Cajuns on the ground with 48 yards on 14 carries.