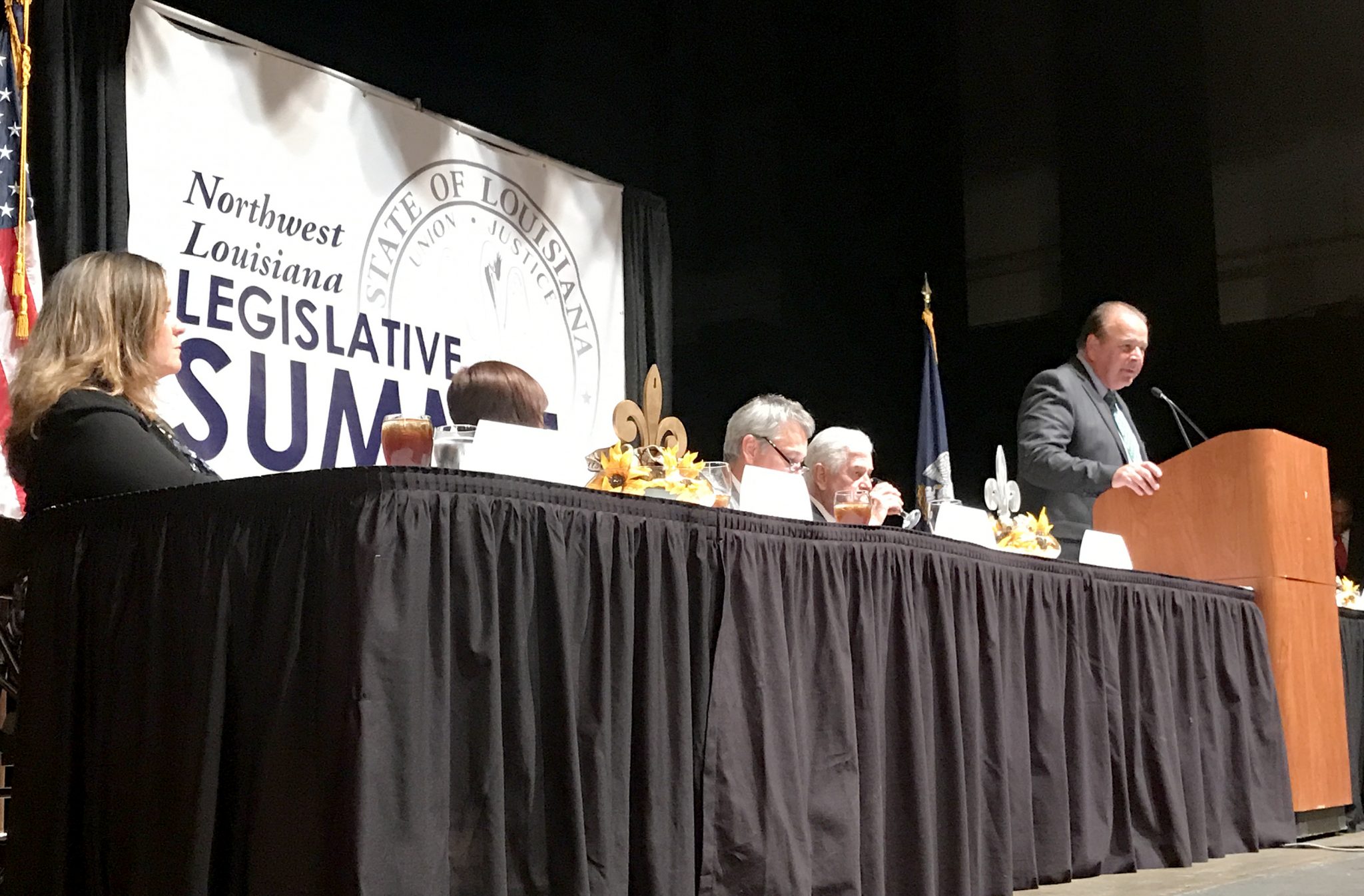 SHREVEPORT — It was a virtual “who’s who” for northwest Louisiana Tuesday as local officials from all across the area gathered to wrap up the 2017 Legislative session in Shreveport.

The 2017 Legislative Summit, hosted by area chambers of commerce, economic development organizations, and municipalities painted a realistic picture of what transpired earlier this summer in Baton Rouge.

“2017 has continued to challenge us. This year was our (dedicated) legislative session and with a looming financial crisis, compromises and difficult decisions had to be made,” said Terry Moore, chairman of the board for the Bossier Chamber of Commerce.

Before a crowd on the floor of the Municipal Auditorium, guest speakers Louisiana Senate President John Alario, R-Westwego, and Louisiana Speaker of the House Taylor Barras, R-New Iberia, gave a view from each side of the Legislature.

Alario said this year’s session saw senators roll up their sleeves to make sure the state is on a sound financial base.

“With a lot of wrangling and gnashing of teeth, we came out with a balanced budget that fully funds the TOPS program. For the first time in 10 years, higher education was spared cuts. Elementary and secondary education were spared any reductions,” said Alario.

However, he warned that a lot of work remains to be done with a looming fiscal cliff for the 2018 fiscal year.

“We’re a little bit of one billion dollars short because $2B that was generated was on a short term basis,” Alario said.

Barras admitted their task in Baton Rouge last year was discouraging, saying, “We were trying to evaluate spending and appropriations on how to best run the state government and watching oil and gas hurting. I would get bad news at the capitol and bad news at the bank.”

He said the major hurdles the state will have to address in the next fiscal session are its “complicated tax policy” and realistically forecasting revenues.

“(Our tax policy) touches many industries in many different ways. We’ve been able to offer blessings of exemptions. Many of those people came to the table to meet the challenge last year,” said Barras. “We have a good bit of work to do there — we have to establish what good tax policy is first and then go down the list about what to reform.”

He said revenue has to be adjusted and downgraded with adjustments to be more realistic and have a less “rosy” view.

Lastly, he addressed the elephant in the room of the fiscal cliff that will see short term taxes expire, leaving a gap of approximately $1 billion.

“On expenses and revenue side, we have some tough decision to make. No one wants to be cut or make a hard move on generating tax, but with the membership we have and hard work between House and Senate, we’ll arise at a reasonable debate and a reasonable solution.”

Locally, Alario said the NWLA delegation is dedicated to being responsive to their area’s needs. Specifically, he pointed out their concern with the viability of the LSU Health Shreveport medical school.

“We hear from legislators all the time how important you medical center is. And we believe it is, too,” said Alario.
Barras complimented the area, saying Shreveport-Bossier and northwest Louisiana “looks a lot different than when I was here in the late 80s.”

“You have an impressive twining of two cities. And it’s beginning to show in all you do and the diversifying of your economy,” he said.

The Minden-South Webster Chamber of Commerce sponsored the summit, along with other local entities.