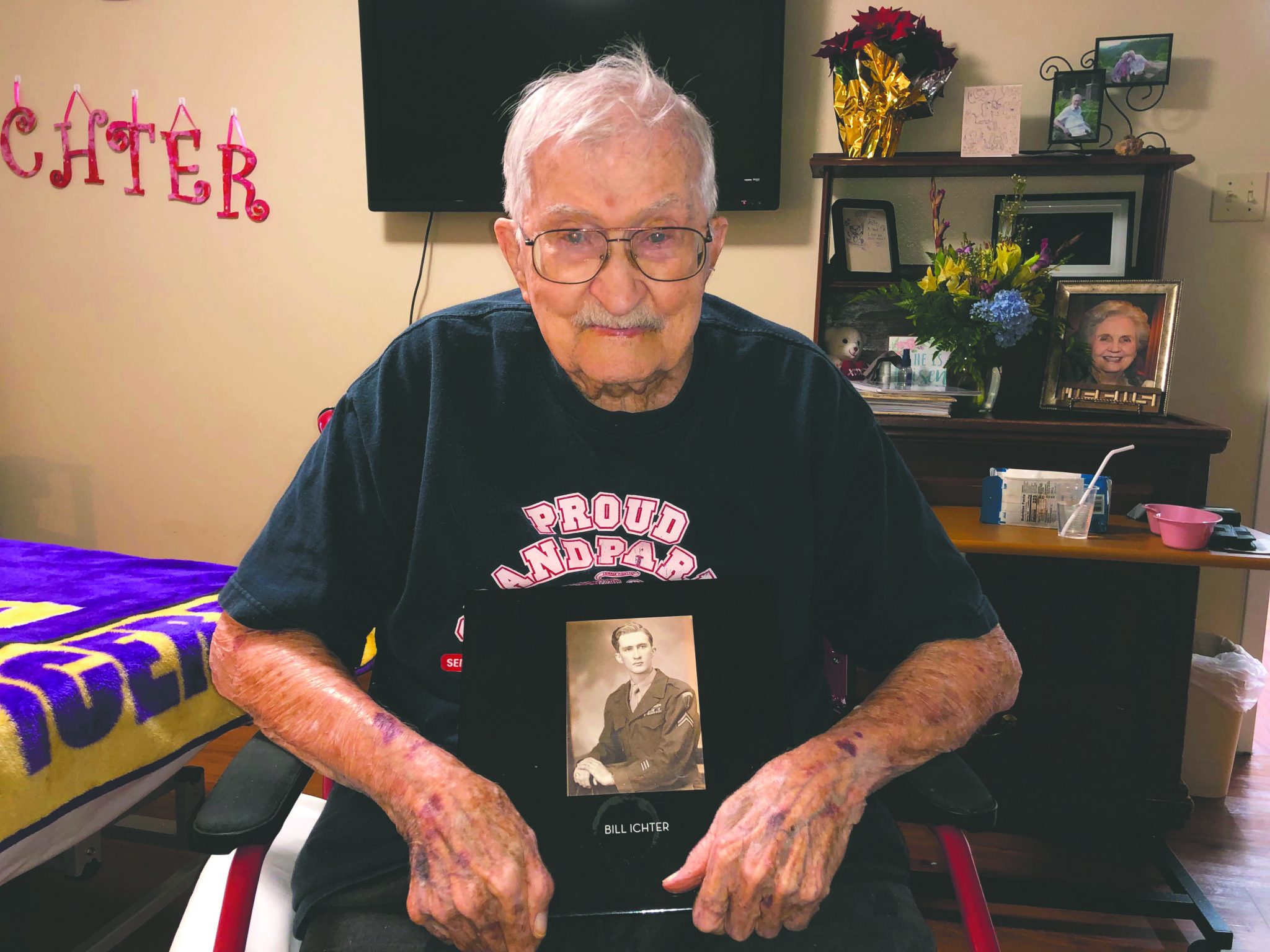 Today is the 75th anniversary of D-Day. The American Army’s official website describes D-Day as a day when, “On June 6, 1944, more than 160,000 Allied troops landed along a 50-mile stretch of the heavily-fortified French coastline, to fight Nazi Germany on the beaches of Normandy, France. Gen. Dwight D. Eisenhower called the operation a crusade in which, ‘we will accept nothing less than full victory.’ More than 5,000 Ships and 13,000 aircraft supported the D-Day invasion, and by day’s end, the Allies gained a foothold in Continental Europe. The cost in lives on D-Day was high. More than 9,000 Allied Soldiers were killed or wounded, but their sacrifice allowed more than 100,000 Soldiers to begin the slow, hard slog across Europe, to defeat Adolf Hitler’s crack troops.”

The Rev. Bill Ichter is a well-known citizen of Minden – a father, a grandfather, a great-grandfather, but most importantly in regards to today, he is a World War II Veteran. During his military career, he achieved the rank of Corporal. He was offered the promotion to Sergeant, but he turned it down, saying that “he was happy with what he was already doing at the time” which was traveling with the US Army Chorus.

He has received numerous awards and achievements as well, with some of the most notable being the Bronze Star Medal, awarded to those for meritorious service in a combat zone, and the French Legion of Honor, which is the highest French order of merit. This merit is also open to British and American Soldiers who took part in the campaign to liberate France upon the authorization from the President of the United States.

In regard to D-Day itself, Ichter said “I’m grateful that they’re publicizing the invasion, letting people know about the great sacrifices these men have made. It’s hard to tell you what we went through… but we went through them and came out, that’s what’s important.”

Internationally, Queen Elizabeth II and world leaders including U.S. President Donald Trump gathered Wednesday on the south coast of England to honor the troops who risked and sacrificed their lives 75 years ago on D-Day.

Across the Channel, American and British paratroopers dropped into northwestern France and scaled cliffs beside Normandy beaches, recreating the daring, costly invasion that helped liberate Europe from Nazi occupation.

The queen, who served as an army mechanic during the war, said that when she attended a 60th-anniversary commemoration of D-Day 15 years ago, many thought it might be the last such event. “But the wartime generation — my generation — is resilient,” she said, striking an unusually personal note.

The crowd beyond the security barriers loved the planes but loved the veterans even more. Whenever their images came up on the big screen, people cheered. The former servicemen have reacted to such shows of attention with humility and surprise, as many believed they had been forgotten.

Elsewhere in Normandy parachutists jumped from C-47 transporters in WWII colors and other aircraft, aiming for fields of wildflowers on the outskirts of Carentan, one of the early objectives for Allied troops.

Among the jumpers was American D-Day veteran Tom Rice, 97. He jumped into Normandy with thousands of other parachutists in 1944 and recalled it as “the worst jump I ever had.”

Like many other veterans, Rice said he remains troubled by the war.

“We did a lot of destruction, damage. And we chased the Germans out and coming back here is a matter of closure,” he said. “You can close the issue now.”