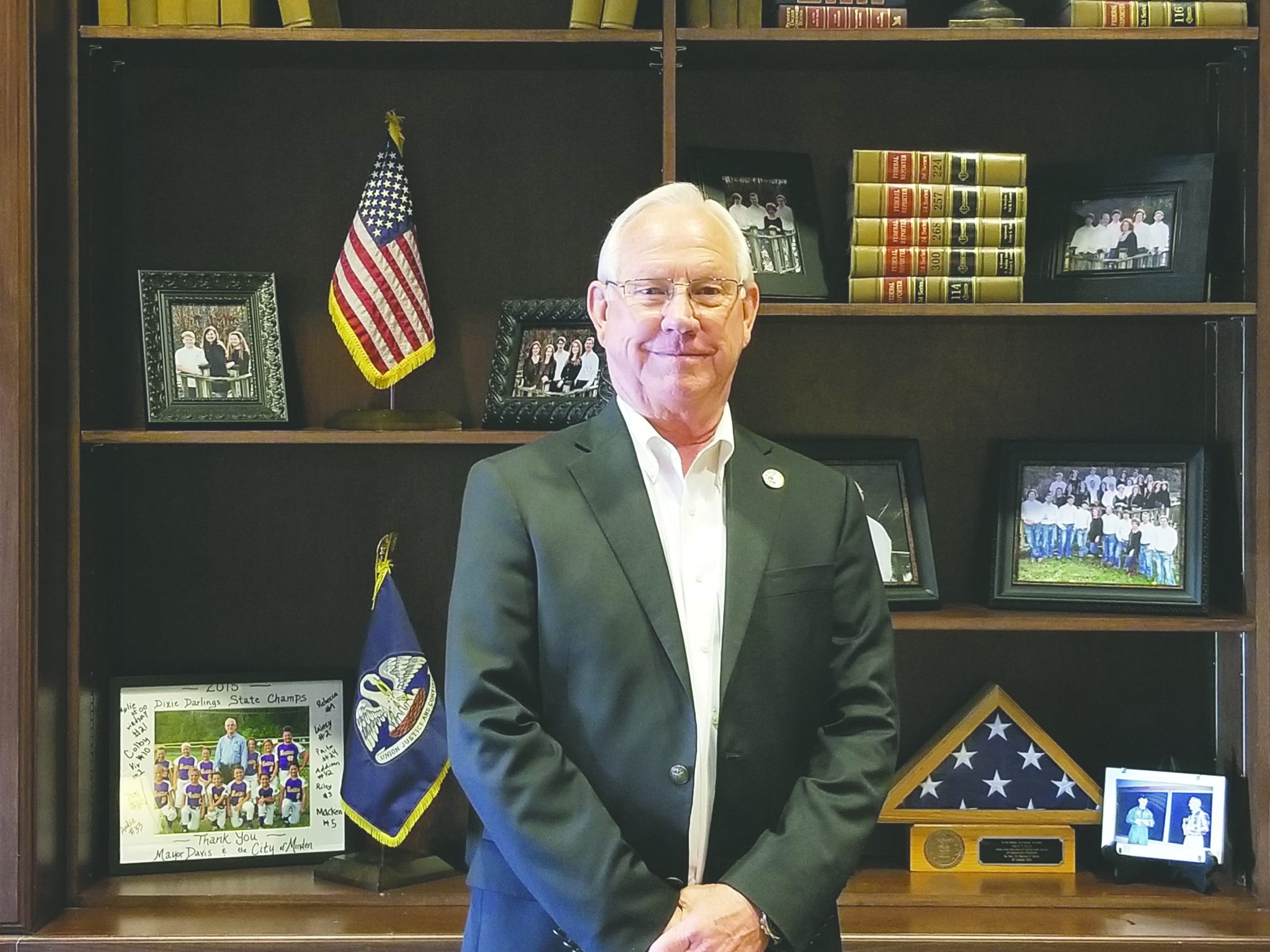 Mayor Tommy Davis is closing out five years as the mayor of Minden. After campaigning and finishing what began as Bill Robertson’s last term which ended in his death, Davis campaigned again a year later to serve a full four year term. He shared some of his reflections on achievements for the city and what he enjoyed the most.

The mayor highlighted many accomplishments he and the City Council reached while he has been in office.

“We’ve done a lot of work on the airport. In the last five years, the airport has completely changed. We’ve got all new hangars, we’ve got a brand new terminal building, we’ve got new fuel facilities. I think that’s been a great accomplishment to have been done while I’ve been mayor,” Davis said.

Davis also focused on the $3 million Automatic Meter Infrastructure (AMI) that was installed on all electric and water meters so that they are automatically read.

“The benefit to the people is that everybody’s meter gets read at the same time of the month,” Davis said.

Before AMI was installed, some residents of the city may have their meter read 25 days into the month then have a 35 day month bill the next month, depending on weather and other influences. This improvement standardized all readings to 30 or 31 days for billing.

A pre-bid conference for sewer improvements was held Tuesday morning which the mayor says will put $800,000 into the city’s sewer system.

There will also be a new computer system used by the City of Minden and the Police Department to upgrade outdated software. Davis also added a qualified IT department head to the city.

“We’re changing to a whole new system and that will be a huge step. That’s something that I won’t get to see finished, but at least I get to see the beginning of it,” Davis said.

Davis also worked with members of the City Council to bring pay raises for all city employees.

“I think that was a big accomplishment. It was probably not what everybody wanted, but every single employee that worked for the City of Minden got a pay raise. Whether you worked here part-time or you’d been here thirty years, you got a raise,” Davis said.

Davis also emphasized the improvements made to streets in Minden during his tenure. He said four years passed with no new overlays. During the past two years, overlays have been carried out on Minden streets and plans for more have been put into next year’s budget.

Davis feels that his hire of James Graham as an Economic Development Director was a promise kept for the people of Minden.

“One of the things I said I was going to do when I became Mayor was to get somebody in economic development and along with the council, I hired James Graham. I had a committee of citizens that helped me with hiring James. He has really laid a lot of groundwork for us to be able to get businesses to come here,” Davis said.

“The importance of that is, we’re totally self-insured on many things. If we had a tornado come through, a storm come through, or an ice storm and it tears up a lot of our infrastructure, we have that to fall back on. Not all of that can be used, but a lot of it can be used for that. So, we’re in good financial shape,” Davis said.

Davis also pointed out that budgets have been balanced during his time as Mayor.

“It’s been tight but we’ve been able to accomplish some things,” Davis said.

Davis says one of his goals is that he still hopes to announce achievement of a deal with electrical rates with SWEPCO.

“The thing that I have not announced yet, but I believe will be soon, the results with our negotiations and talks with SWEPCO that took place in Washington D.C. I think when that’s over, that’s going to be a real accomplishment too. That was one of the goals. I’ve been working on that for four years now,” Davis explained, “The first year we were in office, it wasn’t a major thing. Things changed after that. Our rates began to go up, our costs began to go up, and it’s taken four years to get that to where we will be when I make the announcement.”

Davis reflected on what he feels he could have done differently.

“ Looking back, I’m probably not as good of a communicator with the public as I needed to be. I think a lot of the things that we have accomplished are things that are not necessarily seen by the public therefore not really appreciated by the public but have been great strides for the city and in the long-term are very good for the constituents out there,” Davis said.

With only one incumbent candidate up for election, the City Council seats may be filled completely or with a majority of first time members. He said he expects the new Mayor and City Council members to have a lot to learn about the new positions they’re taking on.

“I think they’ll work together well, whoever is elected in the other positions we’re still waiting on but there’s a learning curve. I’d been on the City Council for seven years when I got here. Believe it or not, when I stepped behind this desk, I realized how little I really knew,” Davis said.

Davis offered advice to the new mayor, as he prepares to move on. He advised him to see employees of the City of Minden as resources for knowledge.

“The advice I would give the future mayor is that he needs to listen to his employees. You’ve got good employees. Sometimes you don’t agree with them, and you have to tell them when you don’t, but for the most part they know what they’re doing and I would listen to the employees,” Davis said.

He reflected on what he felt was the most fulfilling aspect of his work.

“The best part of this job is the people I work with. I have to say that one of the good things about working for the city of Minden and being the Mayor is the personnel that I had that backed me up. In every department, we’ve got good personnel. They trained me well when I got here. That’s the part that I’ll miss the most, the people here. We’re really like family, and it’s been a very good place to have a job,” Davis said of his time at City Hall.

The Mayor was especially grateful for his Administrative Assistant, Wanda Pittman. Whom he says gave him invaluable advice from the start. He was also grateful to the City Council for the work they did together.

“In the five years that I’ve been mayor, I’ve had a very good council to work with. I cannot say that we’ve agreed on everything, but I don’t think that it should be that we always agree on everything. Even though we’ve had differences, in the long run, we’ve made the good decision, the hard decisions, decisions that have been good for the city,” Davis said.

Davis has plans to continue working in his other endeavors and spending time with his wife and 18 grandchildren.

“I don’t feel like I’m an old man by any means. By the numbers, I’m 76 years old. I don’t want to quit completely, but I will slow down,” Davis said.