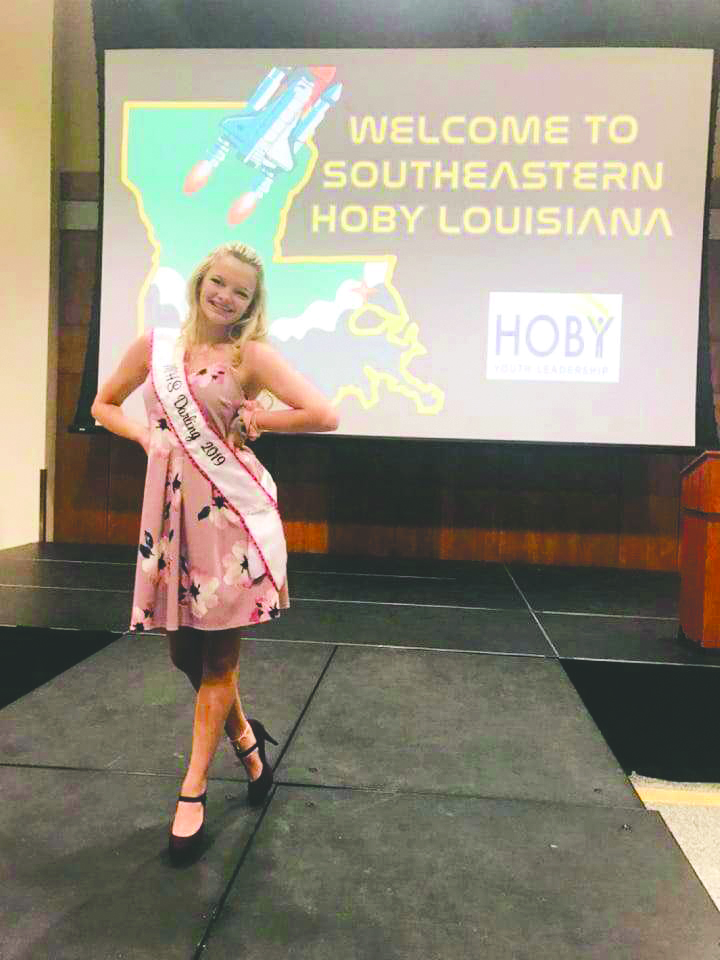 This past weekend was the Hugh O’ Brian Youth Leadership Conference (HOBY), and Minden High school Darling, Adeline Phillips, was there representing Minden High School. According to the official HOBY website, “The HOBY mission is to inspire and prepare future young leaders for a life dedicated to leadership, service, and innovation. HOBY empowers young people to dream big, make an impact, and change the world.”

Minden High School was given the opportunity to send one sophomore to the Louisiana Hugh O’Brian Youth Leadership Program. A committee met together in January and reviewed potential sophomores based on grade point average, school involvement, leadership roles, character, and community involvement. Adeline Phillips was unanimously chosen to represent Minden High School at HOBY for the 2018-19 school year.

Becky Wilson, Principal of Minden High School said “Adeline Phillips is an outstanding representative of Minden High School. She is an example of a high-achieving student who excels academically and socially. Her desire to do her best and help others do their best is contagious.”

When asked about the event, Phillips said that “It was an energizing and inspiring experience. There were a lot of eye-opening speakers. I learned about leadership and leading different types of people and personalities. It was a lot of fun and I made a lot of longtime friends at the conference.”

One of the speakers that stuck out to her at the event was Dr. Nicole Ralston, who Phillips said, “Taught us to explore our personal identities and how we can use our best traits to lead but also how to work better with personalities that might not coincide with our own.” Another panel that stuck out to her was run by Reverend Bade and Dr. Mocia Sylvain. Phillips said, “This was our first panel that focused on how to build and lead diverse communities. What stuck out to me was how they were so accomplished after facing gender discrimination. This factor didn’t scare them but pushed them to do and be better. They were such and inspiration to me.

Even though the event for this year has concluded, she already has her mind set on next year’s conference as well. If she completes 100 hours of community service by next March, she will be able to attend the conference again, but as a counselor. “I want to do this to help facilitate others to have the same great experience that I had” said Phillips.