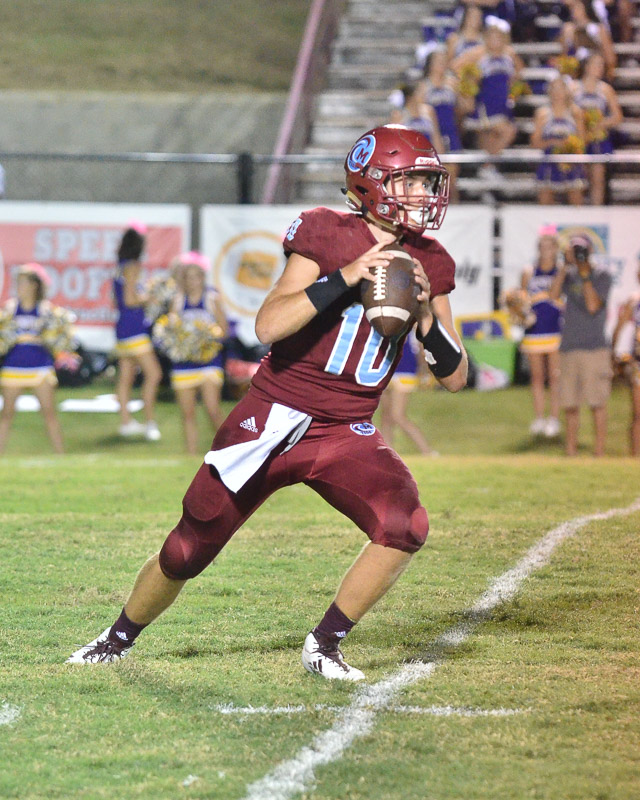 The Tide have forgotten last week’s loss to Benton, focused on slowing down Knights

Minden remembers what the Woodlawn Knights did to them last season, and they’re going to be playing with a vengeance this Friday at Independence Stadium. The Crimson Tide were 9-0 entering the final week of the season in 2016 when the Knights knocked them off their pedestal and stole the 1-4A crown right out from under their nose. The stakes aren’t nearly as high this season, but both teams are playing for their district lives having lost last week. Minden head coach Spencer Heard has been through this district 4 1/2 times now, and knows it’s never easy taking on Woodlawn on the Independence turf. “They have good size up front and lots of speed on offense and defense,” Heard said. “The quarterback seems like he’s pretty accurate; a good challenge.” Last week, the Knights tallied 47 points behind their stout rushing attack in a one-point loss to the Northwood Falcons. “They ran the ball for the most part,” Heard said. “The running back was bouncing it outside sometimes and he does a good job of running violent, but Northwood did a decent job of stopping their inside run game.” Minden has been inconsistent in stopping the inside run game, and a little better at defending the perimeter. In last year’s contest, Woodlawn was able to take advantage of their speed on the turf with Larry Moton, who is back and having a phenomenal senior season. “Moton’s main run play is that jet sweep,” Heard said. “But he can throw it too, so you can’t come up too fast. They can make it look like a speed sweep, so he’s dangerous, and they do a good job of run blocking with their receivers.”

While the Tide certainly have their hands full preparing for the Knights offense, the Minden offense figures to be under even more pressure from a Woodlawn defense that’s much better than last week’s final score would indicate. The Knights’ are extremely athletic in the backhalf and boast physical front seven led by former Tider Ty’Christopher Harris. Harris was a two-year starter for Minden who transferred to Woodlawn for his senior year because of a family move. It’s important for Tide QB Seth Tyler to throw with accuracy on Friday and for Coach Heard to get his son Patrick the ball in creative ways. In order for any of that to be possible, Minden’s most-criticized position group will have to step up in a big way.

“We have to work on our pass protection,” Heard said. “We need to get better at that and give Seth a little more time in the pocket. We still need work on some of the little details and find something in the run game, either inside or outside. There’s a lot of stuff I could name off; we just have to keep working.” Heard said he hopes this young Tide team can avoid distractions this week, such as the district implications. “We’re focused on getting better each week,” Heard said. “I thought we did that last week. We have to try and be mistake free, but the main thing I want is to play hard the entire game.”