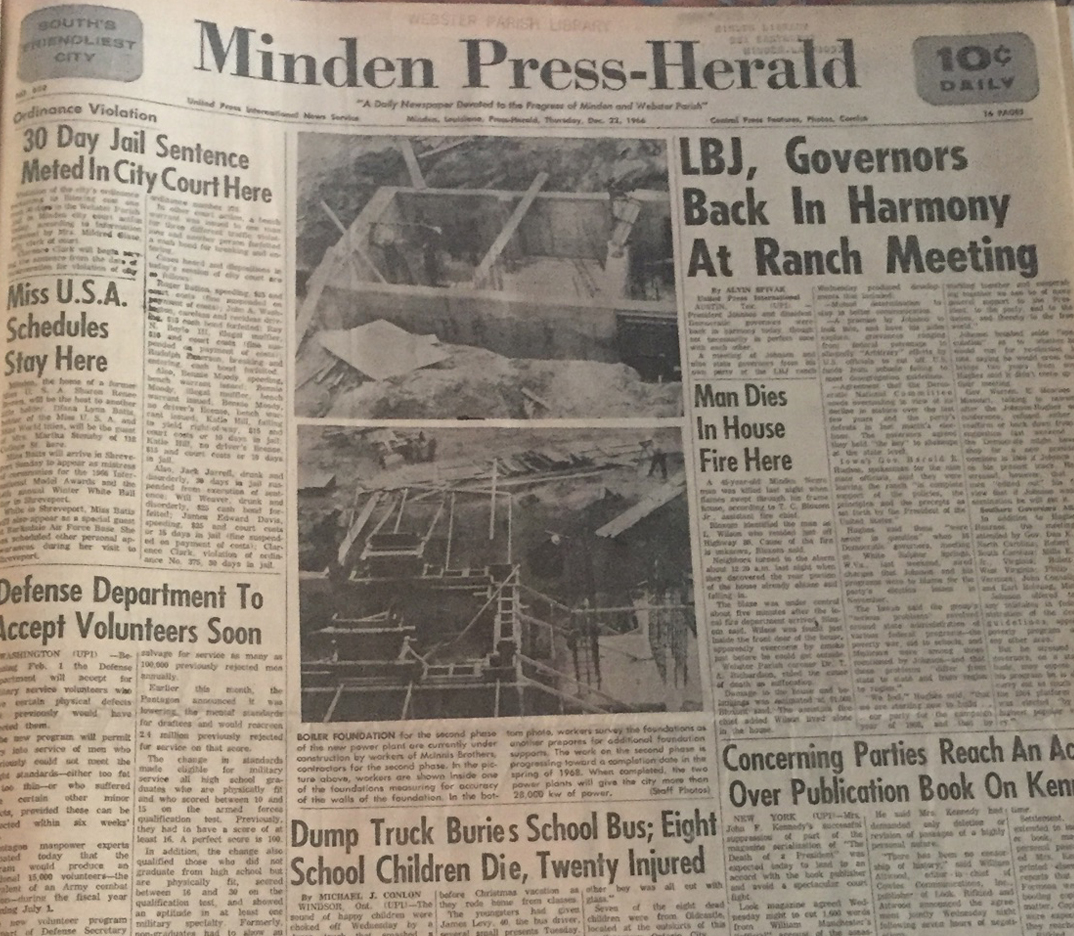 This edition of Press-Herald is celebrating the 50th anniversary of the Press-Herald’s birth as a daily newspaper. In this article I hope to briefly examine the “family tree” of today’s local publication.

William Jasper Blackburn came to Claiborne Parish in the late 1840s from Arkansas. He settled in Minden and became publisher of the Minden Herald. Politically, he was a Democrat, but he was an avid supporter of the Union and opposed slavery. He served one term as Mayor of Minden, from May 1855 to May 1856, despite his well-known anti-slavery views. When the political climate in Minden changed to favor the “Know-Nothings” and against “not-native” ideas he relocated to Homer.

In his new home, he established a newspaper, the Homer Iliad, which he published throughout the war years. Blackburn openly worked against the Confederate government, and survived a trial in Confederate District Court in Shreveport on charges of producing counterfeit confederate currency.

According to traditional accounts of this trial, Blackburn was found guilty by a jury vote of 11 to 1. The crime carried the death penalty if the jury reached a unanimous verdict.

Blackburn had made anti-Semitic remarks in print about the District Judge, who was Jewish. Remembering Blackburn’s remarks the Judge intended to have Blackburn hanged. However, some of Blackburn’s friend’s intervened and not only saved his life, but obtained a pardon. Returning to Homer, Blackburn, while not well liked, continued in business and his newspaper continued to sell. He remained in Homer during the Reconstruction years, serving in the United States House of Representatives as a Republican. Claiborne citizens finally drove him out in 1878, when Redeemer control began.

He relocated to Little Rock, Arkansas where he continued his career as a journalist. An interesting and surprisingly sympathetic account of Blackburn’s career was written by Minden’s “renaissance man, Dr. Luther Longino, in his volume, Thoughts Visions and Sketches of North Louisiana.

The date at which Blackburn began publication of the Minden Herald is not certain, nor is the date it ceased publication. Blackburn was living in Minden at the time of the 1850 Census with his occupation listed as a printer. We do know from the few remnants of surviving issues that the paper was being published as early as 1852, and we all know that Blackburn continued to issue the paper through at least May 1856, although one traditional source has listed publication as ceasing in January 1855.

On May 22, 1856, Congressman Preston Brooks of South Carolina attacked Senator Charles Sumner of Massachusetts with a cane while Sumner was sitting at his desk in the United States Senate. The assault came as a response to comments Sumner had made about Brooks’ uncle, Senator Andrew Butler during the fierce debates in the Senate over slavery and the violence in Bleeding Kansas. Most Southern papers took the stance that Brooks actions were justified as Sumner personally insulted Butler; however, Blackburn’s Minden Herald took a decidedly different stance criticizing both the pro-slavery and anti-slavery forces. The uniques tone of Blackburn’s comments resulted in the Herald’s editorial being reprinted in the New York Times of July 8, 1856. Perhaps the reception locally after that event, contributed to Blackburn’s exit for Homer.

The name Minden Herald was revived once again briefly during the early days of Reconstruction.

Once again few, if any, issues of this paper are still in existence and in fact we only know that it was published because of references in other newspapers of the day. Quotes from early editions of the Shreveport Times, which began publication in 1871, indicate that the Herald was an active publication in 1872, but it seems to have died soon thereafter.

Clifton Harper attended Minden High School and during those years worked at the Webster Signal, learning the printing trade under the guidance of his brother William Harper (later the long-time Veteran’s Affairs Officer for Minden.) After graduation he went to work for a competitor of the Signal, the Minden Tribune, before relocating to Waco, Texas in December 1924 to attend Baylor University.

Harper completed his degree from Baylor in Business Administration and Journalism, with honors, along with his wife Myrtle Buckley Harper, who earned a degree in Business with a minor in journalism. The couple returned to Minden where Clifton’s brothers William and Clinton, along with Prentiss Lowe, had begun publishing a new local paper, the Webster Sentinel in October 1928.

Clifton Harper joined the paper as editor and effective with the issue of Thursday, November 14, 1929, the name of the paper became the Minden Herald. Thus William, Clinton and Clifton Harper and Prentiss Lowe are the fathers of the “Herald” half of today’s Press-Herald.

This was the explanation given for the name change: “The Webster Sentinel changed its name this week to the Minden Herald. The change was prompted by several reasons, foremost of which was that the name ‘Webster Sentinel’ was confused with Webster Signal-Tribune. (Ed. Note: The paper formed when the Webster Signal had merged with the Minden Tribune in 1926.) We hope that you will like it. However, the Minden Herald is not the first time that a paper has gone by gone by that name in Minden, for in 1849, the first ever published here went by that name.”

There is no source listed for the 1849 date for the “old” Minden Herald, and it was not the first publication in Minden. That honor went to a paper called the Minden Iris, which is quoted in documents associated with the founding of Bienville Parish in 1848.

Under Harper’s leadership the Herald advocated a strong program of growth for Minden promoted on the editorial page of each edition. The paper was published weekly on Friday and eventually, the Harper Brothers and Lowe, as the company was called, acquired ownership of the other local paper, the Signal-Tribune, which came out on Tuesday. This began an era of about 35 years when the local community was consistently served by two weekly papers, sometimes under common ownership, sometimes owned separately with the occasional third weekly publication thrown in published by one of the two main papers.

In February 1932, the Herald took over one of those short-lived competitors, the Webster News and changed its name to the Minden Herald and Webster News, published as a single paper.

This arrangement continued until April 1937, when the Harper Brothers left the local newspaper market for a time and the papers were sold to the Webster Printing Company, owned by Hubert and Lilla Stewart Spiva. Hubert Spiva was a veteran newspaperman and his wife, Lilla, daughter of Daniel W. Stewart of Minden, was also trained in newspaper work. The new company ceased publication of the Signal-Tribune, instead issuing the Webster News as a separate paper on the old Tuesday schedule of the Signal-Tribune.

For the next 12 years, Webster Printing and the Spivas had sole control of the local newspaper market. Hubert Spiva died in those years after Lilla Spiva continued to run the corporation after his death.

In 1949, Clifton Harper returned to the local newspaper scene with his new paper, called the Minden Press. Harper engaged in an aggressive marketing campaign with his paper and in a ver short time moved his publication date to Thursday, in an attempt to “scoop” the Friday edition of the Herald. So for a few years, Minden was once again served by three local papers. The News on Monday, the Press on Thursday and the Herald on Friday.

In January 1953, the name of the Webster News was changed to the Webster Review and then, in October 1954, in an apparent concession to the fact that the local market couldn’t support three separate editions, the Review and the Herald were consolidated into a single publication which moved its date of issue to Thursday, in direction competition with the Press. This change came at the same time that Major DePingre was hired as editor of the new Herald.

Bigger changes were in store in December 1955 when a new corporation, Webster Newspaper, was formed. Headed by Tom Colten, a newspaperman coming from Bogalusa, and Charles Nutter, the company bought the Press from Harper and the Herald from Spiva, combining the papers under a single ownership. DePingre was named editor of both the Press, with its new publication date of Monday, and of the Herald, which retained its Thursday issue date. Colten served as publisher of both papers beginning with the January 1956 issues.

This arrangemet continued for over a decade, although Colten sold the paper in July 1965 to a new publisher, Richard Hill, as Colten took a job as Executive Director of the Minden Chamber of Commerce. The move to a daily had been a dream of Colten’s but Hill was able to make the move to a daily in July of 1966.

On Monday, July 18, 1966, the new Minden Press-Herald made its debut as a daily continuing a tradition that began with the first Herald before Civil War and has continued until today.

A few years later the paper was sold to Specht Newspapers who have published the Press-Herald for more than 40 years, providing daily local news to the residents of Minden.

John Agan is a local historian.

From the first edition

Editor’s Note: The following is the front page story to announce daily publication from the July 18, 1966, edition of the Minden Press-Herald.

The Minden Press-Herald today joins the ranks of Louisiana’s non-metropolitan daily newspapers with a 24 page “first-edition.”

The Press-Herald carries on a newspaper tradition started here 118 years ago. The daily, formed from the semi-weekly Minden Press and Herald, can trace its forebearers to the Minden Iris, which is known to have been published as early as 1848, six years before Minden was incorporated.

Throughout the past 118 years, the newspaper business here has undergone many name changes and ownerships, but records indicate that the newspapers have kept pace with the upward trend of the city.

On Jan. 1, 1956, Tom Colten and Charles Nutter purchased the Press and Herald, competing weeklies here and consolidated them into a semiweekly operation under Webster Newspaper Inc. The newspapers experience their greatest period of growth during the nine and a half year period under the direction of Colten.

Colten sold the Press and Herald a year ago this month. Publisher Richard Hill commented that the conversion to a daily officially taken place today was the dream of his predecessor. He credited Colten for his exceptional leadership and imagination that have led to the attainment of the daily newspaper plateau.

In addition to a continuation of the policy of providing all the local news coverage possible, the Press-Herald will offer state, national and international news through the facilities of United Press International. An expansion of the comics, features and other items also is included in the new five-afternoons per week schedule.
Publisher Hill commented that the conversion to a daily newspaper is a major undertaking, but one that is warranted by the growth and progress of Minden and Webster Parish. “We may have some problems to iron out initially, but we will produce the best small daily in the state when we have all the kinks worked out,” he said. “With the pattern set by this area, we cannot help but succeed in this endeavor.”