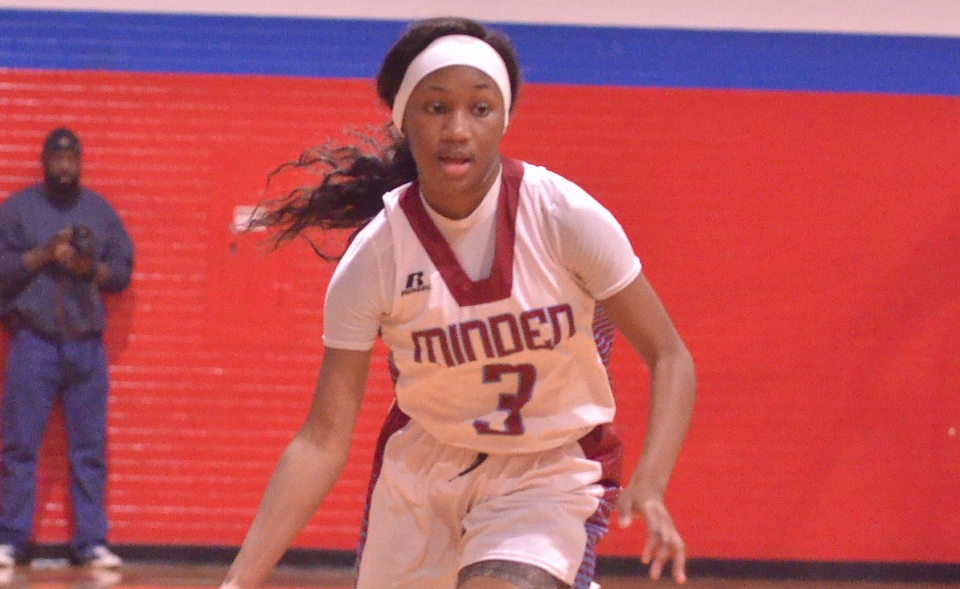 HAUGHTON – At the Jack Clayton Invitational, held over the weekend at Haughton High School, the Minden Crimson Tide won the championship game of the consolation bracket over Calvary Baptist, 58-34.

“I thought our guys competed hard tonight, especially on the defensive end,” Minden head coach Rennie Bailey said after the game. “I thought for the first time all season, the guys were totally locked in on guarding.”

The day before, Minden won a 9-point game to reach the finals against district foe Benton, 61-52.

The Tide are playing better after a slow start, thanks in part to their point guard, Zi Crawford, who drew high praise from Bailey for his play in recent outings.

“He’s stepping up and understanding his role on this team,” Bailey said. “He’s taken 3 or 4 charges for us recently, and if he keeps playing this way we’ll continue to grow as a team.”

Bailey also praised the defense of Asean Davis in helping the Tide get on the two-game winning streak.

Jordan Becnel and Asean Davis led Minden with 14 points each, followed by D. Kemp with 10 and Zi Crawford with 9.
Minden’s next game is Tuesday at home against the Airline Vikings.

The Lakeside Warriors fell in the winners bracket semifinals to the Byrd Yellow Jackets, 59-55.

The Warriors trailed at halftime and at the end of three quarters, but started to mount a comeback in the game’s final quarter.
Lakeside outscored Byrd 22-17 in the fourth quarter, but couldn’t complete the comeback bid.

“We just couldn’t get over the hump tonight,” a disappointed Jason Gould said. “We didn’t shoot the ball well, and I thought we looked a little intimidated on some of our contested layups around the rim. When you don’t finish near the basket and you’re not shooting well, it’s going to be hard to win.”

Lakeside (6-2) will play Benton, who they beat in their opening-round game of the Jack Clayton tournament, Tuesday night in Sibley.

The Minden Lady Tiders also fell in the winners bracket semi’s, as the Captain Shreve Lady Gators got the best of Jacob Brown’s team, 64-49.

“The tale of the game was our inability to consistently score,” Brown said. “We knew they were a good ball team and we needed to control the tempo, and we didn’t do that.”

Sha Whiting led the way with 17 points for Minden, followed by Bre Rodgers with 9 points, Whitney Aubrey with 7 points and Strawberry Batton with 6.