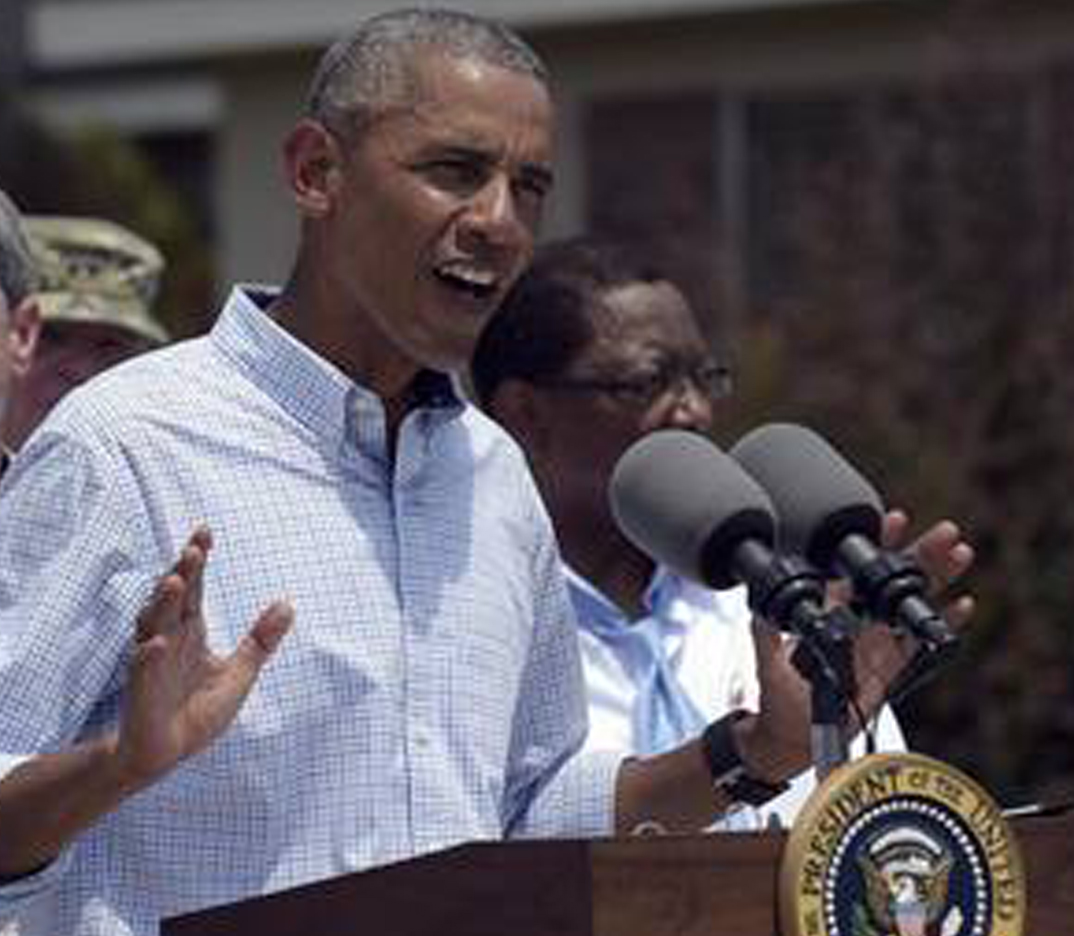 ZACHARY — Standing amid piles of waterlogged debris, President Barack Obama on Tuesday promised a sustained national effort to rebuild flood-ravaged southern Louisiana “even after the TV cameras leave” on a visit aimed in part at stemming campaign-season criticism that he’s been slow to respond to the disaster.

As he toured a battered neighborhood and spoke to local officials, Obama tried to buck up beleaguered residents of the water-soaked region.

“This is not a one-off, this is not a photo-op issue. I need all Americans to stay focused on this,” he said. “I know how resilient the people of Louisiana are and I know that you will rebuild again.”

Eleven years after Hurricane Katrina ravaged New Orleans, Obama’s visit was a reminder of the political dangers and opportunities natural disasters pose for politicians. The president has been criticized for waiting until after he returned from his New England vacation to tour the Gulf Coast flooding. The timing, amid a heated presidential campaign, drew barbs from some local officials and Republicans political opponents, including GOP presidential candidate Donald Trump.

Trump visited Baton Rouge on Friday, enjoying a warm reception and allowing him to cast the president as golfing while Louisianans suffered. It was a sentiment echoed by many in the area, many of whom have said they feel their plight has been ignored by the media.

“Too little too late,” Mona Gaspard said of Obama’s visit. The resident of Ascension Parish said she saw her home filled with 4 feet of water and resented what she saw from Obama. “I saw him play golf, not helping out over here. Trump was over here, but he wasn’t,” she said.

Others welcomed Obama and the spotlight he brought.

“It means a lot to know you have that support from the highest level,” said Chrisena Brown, as the president surveyed the piles of discarded mattresses, broken appliances and heaps of clothing that line the curbs of her street. The college administrator says she’s staying with family while she cleans up, working late into the night in stifling humidity.

Going door to door and trailed by cameras, Obama offered sympathy to residents as they took a break from the cleanup.

“I wish I was coming at a better time,” he told one resident, as he put his arm around her and walked into her home for a brief tour. “But I’m glad to see everybody is safe, at least.”

Obama is hardly new to the potent politics such moments. As a candidate in 2008, he was a sharp critic of President George W. Bush’s response to Hurricane Katrina. And in 2012, the year of his re-election effort, he rushed to Louisiana to show solidarity with victims of Hurricane Isaac.

Now a president eying the end of his second term, Obama was neither emotional nor particularly defensive in relaying his message to residents. He said flatly he doesn’t “worry too much about politics” and that he is focused on improving the speed and efficiency of the federal response.

The White House said $127 million in federal aid had been designated for temporary rental assistance, essential home repairs, and flood insurance payments. More than 115,000 people have registered for federal disaster aid, with the state saying $20 million has been distributed to individuals so far. At least 40 state highways remained closed.

Louisiana officials aimed for bipartisan support and unity as they turned to the task of rounding up federal money for their state. A large group of officials met the president at the airport, including Louisiana Gov. John Bel Edwards, a Democrat; Lt. Gov. Billy Nungesser, a Republican; and Republican Sens. Bill Cassidy and David Vitter.

In a letter to Obama, Edwards asked the president to reduce Louisiana’s share of the response costs from 25 percent to 10 percent, to fully cover the Louisiana National Guard’s response costs and to seek disaster block grant aid for the state from Congress.

The governor estimated flooding has ravaged “well over 100,000 homes” across south Louisiana — on top of 29,000 homes that received damage in a March flood in northern parts of the state.

Edwards had said Obama was better off timing his visit until after the cleanup was underway, so as not to pull resources away from the effort. Democratic nominee Hillary Clinton issued a statement Monday saying she would visit “at a time when the presence of a political campaign will not disrupt the response, to discuss how we can and will rebuild together.”

Before leaving Louisiana, Obama paid another visit he has been criticized for delaying. The president met privately with the family of Alton Sterling, a black man whose death last month in a police shooting sparked protests and mass arrests. Obama also met with the families of officers killed or injured nearly two weeks later by a gunman, apparently in response to Sterling’s killing, the White House said.

Obama was criticized for not visiting Baton Rouge after those two incidents, although he went to Dallas to eulogize five police officers killed in another attack targeting law enforcement.