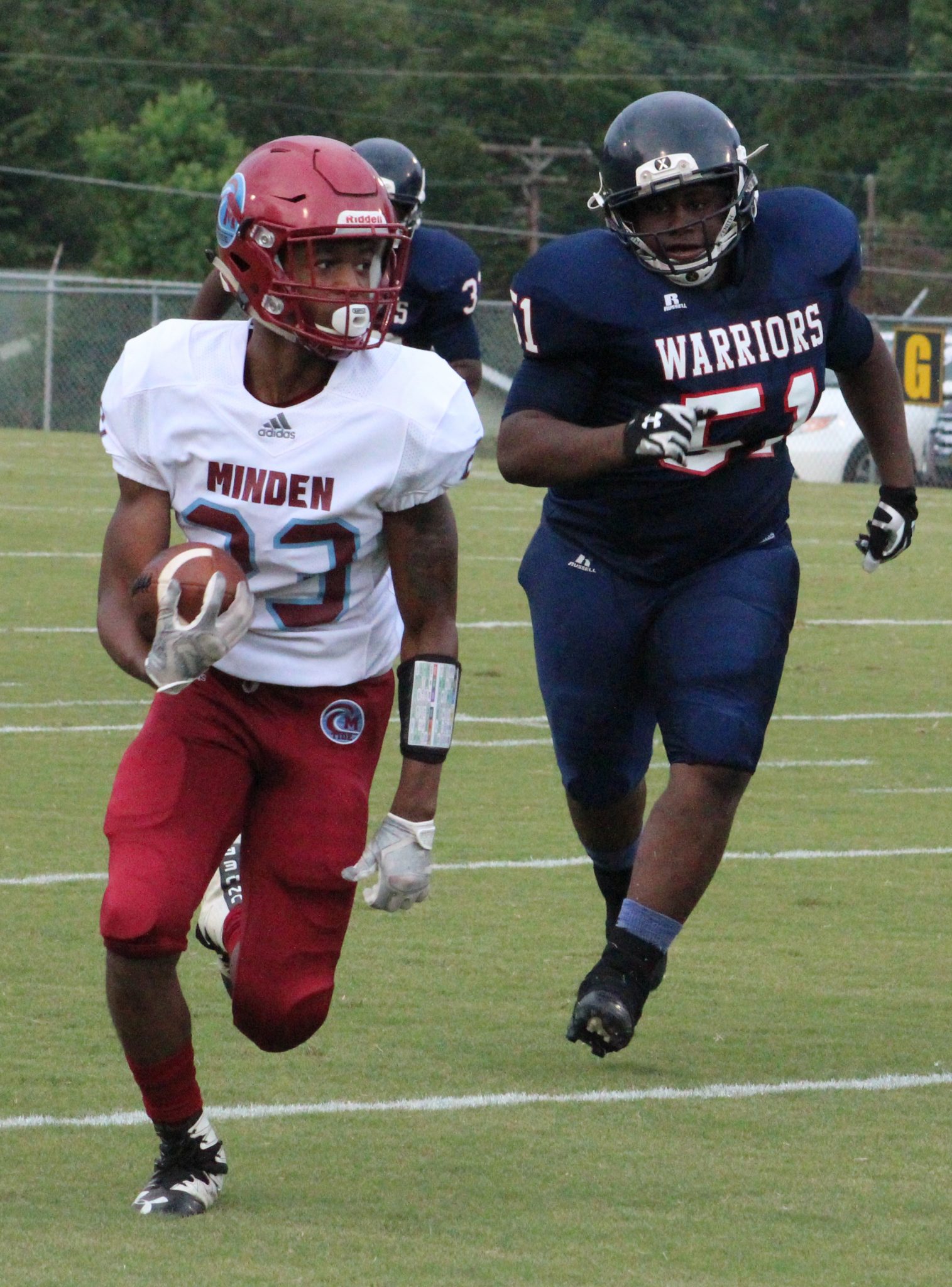 HAYNESVILLE ­– On an unseasonably cool August night, the Pineland Jamboree, as it has so many times, ushered in a new football season for Webster Parish.

With Claiborne Parish juggernaut Haynesville hosting the event this season, Minden, Lakeside, North Webster and Cedar Creek made the short drive over to Red Franklin-Memorial Stadium for their final tests before the regular season kicks off.

The action on the field was spirited, starting with Minden’s 20-13 win over the Lakeside Warriors.

The Tide went ahead almost instantly with a 5-play touchdown drive capped by Zack Gage from 5-yards out on the ground.

The Tide recovered a squib kick on the ensuing kickoff to take back over, this time with Seth Tyler deciding to tuck and run for the score, pushing Minden’s advantage to 14-0.

Lakeside struck back a few minutes later, working against a mix of 1’s and 2’s for the Tide, when sophomore quarterback Jordan Preuett found Gavin Jones for a 45-yard gain down to the Minden 1-yard line. Preuett kept it himself on a read option for a 1-yard score to pull Lakeside within 7 points at 14-7.

Jayke Stewart picked off Tide sophomore Beau Branch on Minden’s next possession and returned the ball back to the 1-yard line where Preuett carried up the middle for his second rushing TD.

Minden’s first-string offense went back to work in a 14-13 game, taking only two plays for Tyler to find Marcus Smith for a 60-yard touchdown through the air which provided the final score of 20-14.

Minden met North Webster in game two and the Knights won a low-scoring contest against the Tide 7-0.

Minden’s offense moved the ball at times, but North Webster’s defense always had the answer, forcing Tyler into two interceptions and recording a pair of sacks.

North Webster scored the only touchdown of the game when Tyrell Markray went play action over the top of the Minden defense to TJ Hawthorne for a 70-yard touchdown pass.

North Webster turned around to play Cedar Creek and fell 8-0 to the Cougars in a tightly-contested affair.

Cedar Creek took the lead late with a beautifully-executed fade route to the back left corner of the end zone.

There was a scare sent through Knight Nation halfway through the game, as Hawthorne, North Webster’s senior two-way standout, went down with a lower leg injury and was helped off the field putting very little weight on his right leg.

Knights head coach John Ware said over the weekend he expects Hawthorne to be ready for week one’s tilt with Haynesville back at Red Franklin-Memorial Stadium.

Haynesville trounced Cedar Creek and Lakeside to close the evening, as the Golden Tornado, once again, look like a force to be wreckoned with in Class 1A.

Minden HC Spencer Heard: “The first few drives everything was clicking, but when we put some of the 2’s in, there was definitely some room for improvement… Overall, I thought it was good. Couple of breakdowns defensively on the long pass. We still have a couple things up front in the run game and pass protection. We’re reacting too slowly, but I think that’s going to come with time.”

Lakeside HC Jason McClendon: “We started playing with confidence last night. The defensive only gave up a couple of big plays. On offense, we really started playing to the level I want to see us play at… In the first game, I feel like if we would have played four quarters, we would have liked the result.

Haynesville, their athletic ability is obviously elite. I’m glad we got to experience that, it was a good learning experience for our kids. Overall, we did some good things and improved tremendously from week one to week two. We’re set up good for our first game against Ringgold.”

North Webster HC John Ware: “We went out and did what we wanted to do. I thought we were much better than the week before, but we still have a long way to go.

We need a little better production up front offensively, and if we do that we’ll be successful against anybody. Tyrell Markray at quarterback played really well. I saw more control of the huddle and the offense.

Defensively, we got pressure all night. Up front we were pretty good and on the backhalf we were good besides one throw.”