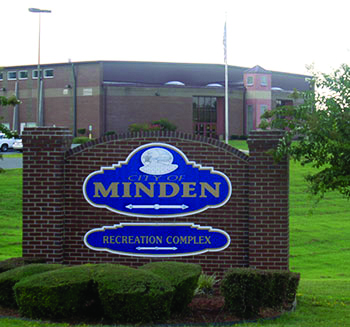 Mike Aguilar, assistant director of Minden Parks and Recreation, told MPH that there are a number of new projects in the works at the Rec Center.

“We’re starting our first ever fall soccer program,” Aguilar said. “About 215 players signed up; we expected about 60 or 70.”

Aguilar and the team have created an extra football/soccer field in the back of the complex on a field that wasn’t being used.

Soccer season started this past weekend will run through November 16.

“It went really well for the most part,” Aguilar said about the kickoff of soccer season at the Rec.

“It’s a new program that we partnered with CABOSA. They assist us with forming teams and from a legal perspective we now have insurance through Louisiana Soccer Association that allows us to get certified with us Federation referees.

“People love it, but it’s an ongoing process.”

BMS Office Supplies and Habacu’s have purchased soccer goals for the Rec Center as well, which Aguilar said has been a huge help.

Aguilar and his team are working to bring Camp Gladiator to the Rec Center in the near future.

“We just want to get more and more people involved and get them up to the Rec Center,” he said.

In other big news, adult basketball is coming to the Rec Center in a few months.

“Right now our basketball registration is now open,” Aguilar said. “In March of 2020, we will have our first ever adult basketball league at the Rec”

There will be a men’s division and a women’s division. Games will take place at the Rec Center on Mondays and Wednesdays at 5:30 p.m. and at 7 p.m.

Finally, the youth football program has been underway for weeks now.

Aguilar said getting people to come up to the Rec Center is the top priority.

“It’s nice to see all the families taking advantage of the Rec,” he said.