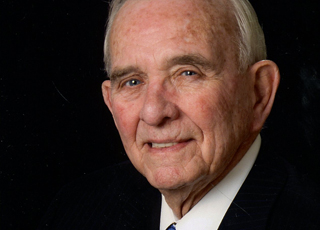 Facebook
Twitter
Linkedin
Email
Print
Risdon Ernest (Jack) Woodard Jr. of Minden, left this earthly home to be with his Lord and Savior and his beloved Jerry on July 12, 2016.

Jack was born in Gibsland on Aug. 1, 1930 to Annette R. Woodard and Risdon Ernest Woodard Sr. and was the second of three sons. Born as Nathaniel Edwin, Jack’s name was changed at the age of 9 in memory of his older brother who died of pneumonia, and in honor of his father. He graduated from Gibsland High School and went to LSU for a year before transferring to Louisiana Tech to play baseball and major in Forestry. While there, he was a Kappa Sigma, the second of four generations. Jack was a faithful fan and true supporter of La Tech all his life. He served on the Alumni Board and Foundation Board, received the Tower Medallion Award and was Alumni of the Year in 1994. He served many years on The Forestry Board as well as 26 years on the MBL Bank Board. He was VP of Woodard-Walker Lumber Company where he worked from his graduation until his retirement.

Jack and Jerry raised their family in Taylor and were active members of FBC Taylor before moving to Minden in 1966. He was a dedicated Sunday School teacher for over 50 years and a Life Deacon at FBC Minden.

His later years were spent going to his office at 511 Main, and on his farm, raising cattle and mowing on his John Deere Tractor. He loved his family dearly, and loved the Lord above all else. He passed down a legacy of Christian values for his children, grandchildren, and great-grandchildren to emulate. He will be deeply missed.

A celebration of his life will be held at 11 a.m. Friday, July 15, at First Baptist Church Minden with Bro. Jimmy Eppinette and Bro. Steve Gilley officiating. Visitation prior to service from 10 until 11 a.m. A family burial will follow at Gardens of Memory. Pallbearers will be David Ogwyn, Marvin Jones, and grandsons, Chad Teague, Clay Teague, Mason Woodard and Noah Woodard.

A special thank you to his wonderful caregiver, Ina Warren, as well as Deanna, Stephanie, and Becky and nurses Brian, B.J. and Donna.

For God so loved the world, that he gave His only begotten Son, that whoever believes in Him should not perish, but have eternal life. John 3:16.