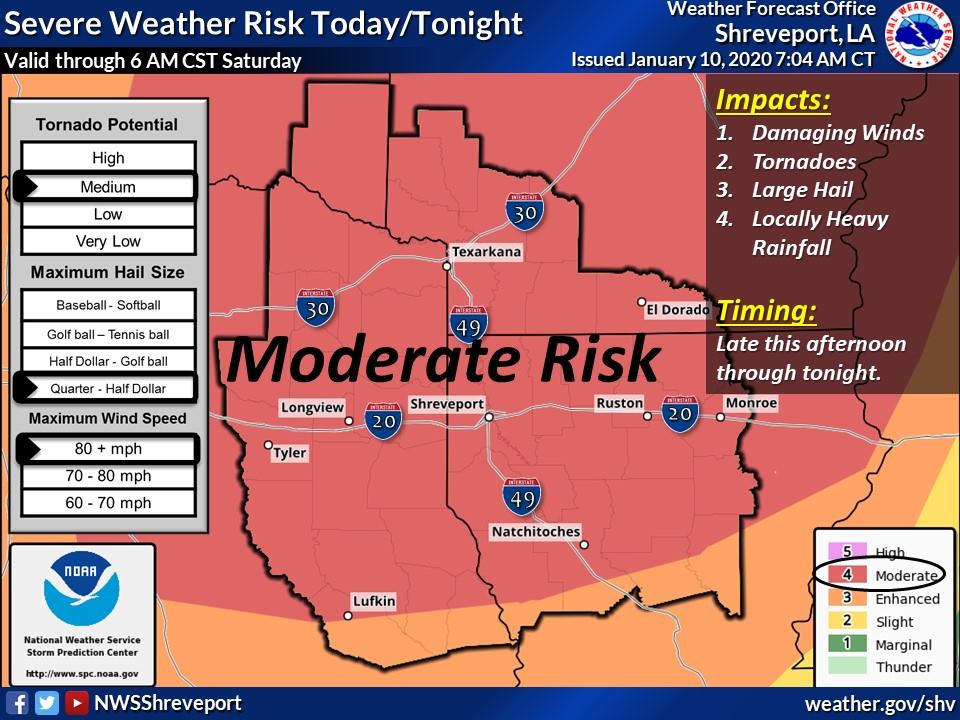 Hurricane-force wind gusts and hail the size of baseballs could accompany potent storms that also threaten to spin up tornadoes and drench the South with heavy rains, forecasters said Friday.

The national Storm Prediction Center said more than 18 million people in Louisiana, Arkansas, Texas and Oklahoma will be at an enhanced risk of storms Friday that could include strong tornadoes and flooding rains. The area includes several major Texas cities including Dallas, Houston and Austin.

In a briefing early Friday, the National Weather Service said the storms could bring wind gusts of up to 80 mph (129 kph) or faster, the speed of a Category 1 hurricane.

In Dallas, the city’s Office of Emergency Management asked residents to bring in pets, outdoor furniture, grills, “and anything else that could be caught up in high winds to reduce the risk of flying debris.”

“Trampolines are very easy to loft into the air during high winds,” said Matt Hemingway, a meteorologist at the National Weather Service in Shreveport, Louisiana. “Anything outside that could be blown around could become a projectile.”

“We’re pretty much right in the crosshairs,” Hemingway said of Shreveport. “Damaging winds are our biggest concern because of the widespread nature of that threat, with tornadoes not far behind that.”

Such strong winds are a key concern in an area at greatest risk: A zone that includes parts of Texas, Oklahoma, Louisiana and Arkansas, the Norman, Oklahoma-based Storm Prediction Center warned.

“We could see some very strong tornadoes — possibly those that may stay on the ground for some time — not just the brief spin-up tornadoes,” Hemingway said.

In Oklahoma, multiple tornado warnings were issued late Friday morning and much of the state was under a tornado watch. Though severe storms were already forming in Oklahoma, no damage was immediately reported, and the main threats for the larger region were not expected until Friday afternoon and evening.

In Texas, Gov. Greg Abbott said boats, helicopters, medical and rescue teams have been placed on standby in case they are needed.

“I ask that all Texans keep those in the storm’s path and all of Texas’ first responders in their prayers as they deal with the effects of this storm,” Abbott said in a statement.

Wicked weather also will pose a threat to Alabama and Georgia as the system moves eastward on Saturday, forecasters said.

Heavy rains also could cause flooding across the South and part of the Midwest.

The latest forecasts call for up to 4 inches (10 centimeters) of rain in parts of Texas and southeast Oklahoma, according to the National Weather Service.

Many streams already are at or near flood levels because of earlier storms, and heavy rains could lead to flash flooding across the region, forecasters said. Parts of Texas, Oklahoma, Arkansas, Mississippi, Tennessee, Kentucky, Missouri, Illinois and Indiana were under flash flood watches on Friday in anticipation of the drenching rains.