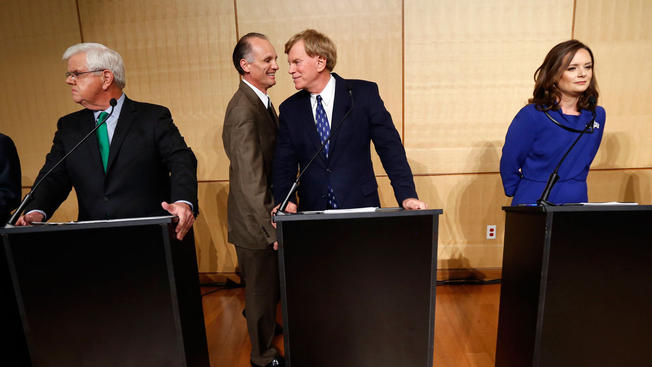 BATON ROUGE — Contenders to be Louisiana’s next U.S. senator are struggling to break away from the pack in a race where the top tier of candidates have stayed remarkably close in the polls and where only a few percentage points could determine who reaches the runoff election.

The five major candidates — out of 24 people who signed up for the race — have locked in their campaign narratives, continue to take direct hits against their opponents and are making their final pitches to voters ahead of Tuesday’s election.

No one candidate is expected to top the 50 percent support needed to win outright, so the race is nearly certain to go to a Dec. 10 runoff to determine who will start the new Senate term in Washington in January.

Republican state Treasurer John Kennedy has consistently been the front-runner in the Senate race for the past year, but polls have shown four challengers all within striking distance.

Those contenders are Republican U.S. Reps. Charles Boustany and John Fleming and Democrats Foster Campbell, a member of the Public Service Commission, and Caroline Fayard, a lawyer who has never held elected office.

The seat is open because Republican David Vitter isn’t running for re-election.

The major GOP candidates don’t differ much on their policy positions. They’re anti-abortion, opposed to the federal health overhaul and disagree with nearly all the large decisions made by President Barack Obama.

On the Democrats’ side, they have similar talking points on increasing the minimum wage, enacting equal pay legislation and tweaking — but keeping — Obama’s Affordable Care Act.

With difficulty striking philosophical contrasts, the candidates largely are running on personality and individual resumes.

In the last debate ahead of Election Day, Boustany talked about getting things done in Congress despite partisanship, describing himself as a “conservative who gets results.” Campbell talked of decades of fighting for “the little guy, the guy that doesn’t have a big voice.” He’s touted his endorsement from Democratic Gov. John Bel Edwards.

Fayard positioned herself as a fresh face for Congress, saying her opponents are all long-time politicians who aren’t going to change Washington. Fleming described himself as the “one true conservative” among the top contenders in the race, highlighting his membership in the ultra-conservative House Freedom Caucus.

Kennedy said politicians in Washington, both Republican and Democrat, have misspent taxpayer money, haven’t listened to the concerns of voters and should be replaced.

Fleming and Boustany have hit their fellow Republican, Kennedy, for the state’s continuing budget problems, though the treasurer has little control over the spending decisions made by governors and lawmakers.

“Mr. Kennedy, if you were my chief financial officer, you’d be fired a long time ago,” Fleming said in the most recent debate.

Both congressmen also chastise Kennedy for spending money on a downtown Baton Rouge office rental that was more expensive than state office building space and for running years ago as a liberal Democrat who endorsed John Kerry for president. Boustany calls Kennedy a “publicity hound” who talks a lot about the state’s problems, but has done nothing to fix them.

Kennedy’s equated the attacks to one sentiment, that people hit those who are in the lead.

“When you’re getting kicked in the rear, it usually means you’re in the front,” Kennedy said.

Campbell slammed Fayard for her work on Wall Street and accused her of trying to buy a Senate seat with her personal wealth. Fayard’s dismissed all four men with whom she’s competing as career politicians.