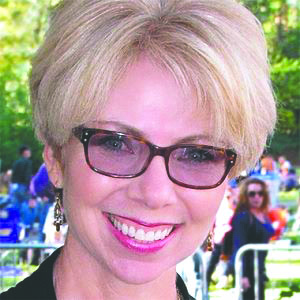 Swaine is the Executive Director of the DDA and the non-profit Downtown Shreveport Development Corporation in Shreveport, Louisiana.

Swaine’s program is titled “Why Downtowns Are On the Rebound.”

Swaine has had careers in private business, government and the media. During her news tours of duty, she met and interviewed Russian president Vladimir Putin, and deployed with the Air Force into Gulf War hotspots. As executive assistant to the mayor, she saw how government operated from the inside out.

Swaine is an instrument-rated private pilot who has jumped out of airplanes and is a former triathlete and bicycle racer who now rides motorcycles on and off-road.

She is married to Steve Culp, with whom she shares an affinity for old buildings. They are currently rehabbing a 52,000-square foot historic building that Steve swears will be his last. Liz knows better.

When not working to make Shreveport’s downtown a more vibrant place, she is likely playing with her four rescue pups or plotting her next motorcycling adventure with Steve.

Lunch Bunch is $12 per person. Credit cards are not accepted. The public is invited to attend.