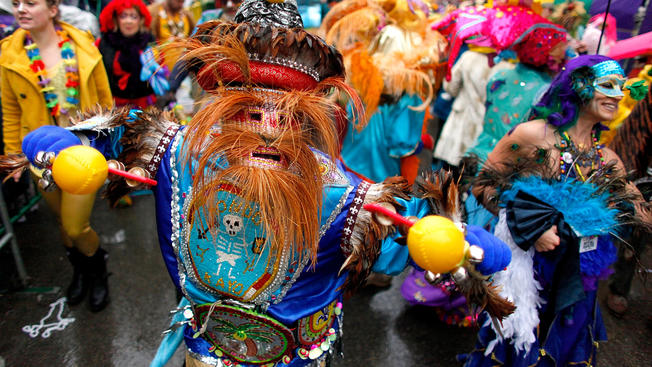 NEW ORLEANS — The streets of New Orleans will be filled Tuesday with costumed revelers, dazzling floats featuring kings and queens, and people of all ages screaming for trinkets and beads. Lots of beads.

Tuesday marks the culmination of the Carnival season, which started Jan. 6.

The biggest parades take place along the St. Charles Avenue parade route, where the Krewe of Zulu kicks off the morning’s parades and is followed by the Krewe of Rex.

Families, tourists and locals set up their chairs and ladders early to get a good seat for catching the trinkets thrown by riders on the floats. The hand-crafted coconuts handed out by members of Zulu are particularly sought-after.

In another part of the city, people dressed in elaborate costumes take part in the St. Anne’s parade — an eclectic walking parade that starts in the Bywater and Marigny neighborhoods and ends in the French Quarter.

Members of various Mardi Gras Indian tribes — they’re African-American rather than Native American — will also be out on the streets in hand-sewn, beaded and feathered outfits that they have been working on for months.

At the stroke of midnight, police on horseback do a ceremonial clearing of revelers on Bourbon Street to mark the formal end of the Carnival season before Lent begins Wednesday. The word “carnival” comes from the Latin words meaning “farewell to flesh,” and was originally a time to revel and to use up all the fat and meat in the larder before the austerities of Lent.

This year’s Mardi Gras season was marred by a suspected drunken-driving incident that sent more than 20 people watching a parade to the hospital Saturday night. No one was killed.

Police say a drunken driver whose blood-alcohol level was nearly three times the legal limit plowed into a crowd of people watching the Krewe of Endymion parade in the Mid-City neighborhood. The driver, identified as 25-year-old Neilson Rizzuto, was arrested and is being held on $125,000 bond.

On Sunday, a man fell off a float and injured himself near the end of another parade. Penny Larsen, a spokesman for the Krewe of Thoth, told The Times-Picayune the man had a concussion but was reported to be responsive.