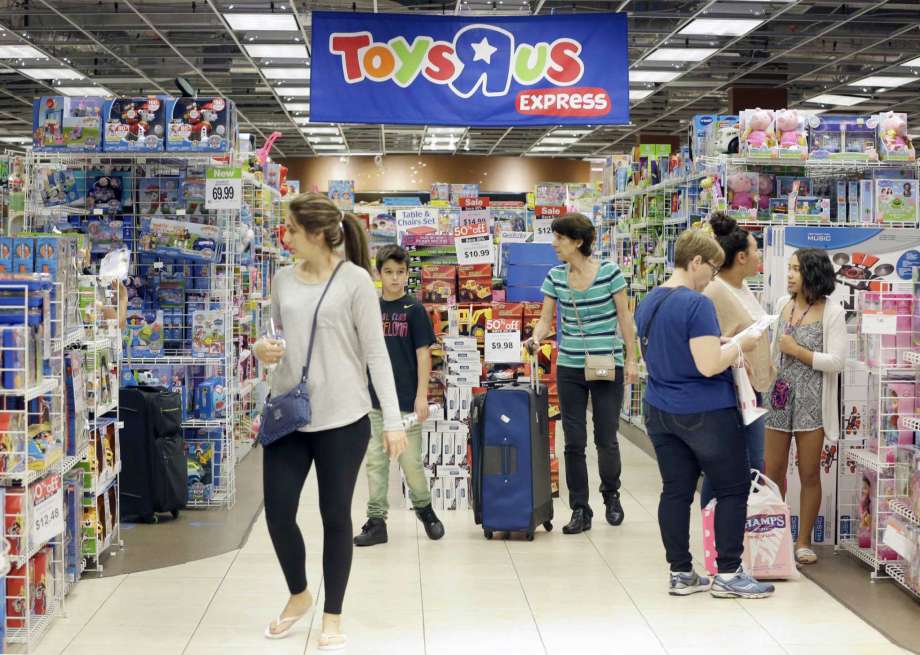 NEW YORK — Toys ‘R’ Us, the big box toy retailer struggling with $5 billion in debt and intense online competition, has filed for bankruptcy protection ahead of the key holiday shopping season — and says its stores will remain open for business as usual.

The company said the proceedings are a way for Toys ‘R’ Us to work with its creditors on restructuring the debt beleaguering it. And it emphasized that its stores worldwide will remain open and it will work with suppliers and sell merchandise.

Filing for bankruptcy protection “will provide us with greater financial flexibility to invest in our business … and strengthen our competitive position in an increasingly challenging and rapidly changing retail marketplace worldwide,” Chairman and CEO Dave Brandon said in the announcement.

The move comes at a critical time leading into the holiday season that is crucial to retailers’ bottom lines. The company said it was “well stocked as we prepare for the holiday season and are excited about all of our upcoming in-store events.”

Retailers of all kinds are struggling. The Toys ‘R’ Us bankruptcy filing joins a list of at least 18 others since the beginning of the year — including shoe chain Payless Shoe Source, children’s clothing chain Gymboree Corp. and the True Religion jean brand — as people shop less in stores and more online.

“Toys R Us had little choice but to restructure and try to put itself on a firmer footing, said Neil Saunders, managing director of GlobalData Retail. However, he added, “even if the debt issues are solved, Toys R Us still faces massive structural challenges against which it must battle.”

Toys ‘R’ Us, a major force in toy retailing in the 1980s and early 1990s, started losing shoppers to discounters like Walmart and Target and then to Amazon. GlobalData Retail estimates that in 2016 about 13.7 percent of toy sales were made online, up from 6.5 percent five years ago.

And children are increasingly moving more toward mobile devices as playthings. “For many children, electronics have become a replacement or a substitute for traditional toys,” Saunders said.

Toys ‘R’ Us has struggled with debt since private-equity firms Bain Capital, KKR & Co. and Vornado Realty Trust took it private in a $6.6 billion leveraged buyout in 2005. The plan had been to take the company public, but that never happened because of its weak financial performance.

With such debt levels, Toys ‘R’ Us has not had the financial flexibility to invest in its business. Analysts say Toys ‘R’ Us hasn’t been aggressive about building its online business, and has let those sales migrate to rivals. And they say the company should have also thought of new ways to attract more customers in its stores, such as hosting birthday parties.

Randy Watson of Fort Worth, Texas, has been buying fewer gifts for his five grandchildren from Toys ‘R’ Us and more from Walmart and Amazon. He says he visits Toys ‘R’ Us to check out the items, but then usually uses his phone from the aisle to buy them for less elsewhere.

“If we were buying a gift beyond a toy, I would be less apt to buying” at Toys ‘R’ Us, he said.

While toy sales overall have held up fairly well, they are shifting toward discounters and online companies. U.S. toy sales rose 6 percent last year on top of a 7 percent increase in the prior year, says NPD Group Inc., a market research firm. That was the biggest increase since 1999 and was fueled by several blockbuster movies.

But for the first half of 2017, sales rose 3 percent. That puts more pressure on the later part of the year, when most toy sales occur, for the industry to meet NPD’s estimate for a 4.5 percent annual increase. Lego is laying off 1,400 workers after saying profits and sales dropped in the first half. And the nation’s two largest toy makers, Mattel and Hasbro, reported disappointing second-quarter results.

Toys ‘R’ Us, based in Wayne, New Jersey, announced the filing late Monday. It said it was voluntarily seeking relief through the U.S. Bankruptcy Court for the Eastern District of Virginia in Richmond, and that its Canadian subsidiary would be seeking similar protection through a Canadian court in Ontario as it seeks to reorganize.

Its announcement said separate operations outside the U.S. and Canada are not part of the filings.

“The company’s approximately 1,600 Toys ‘R’ Us and Babies ‘R’ Us stores around the world — the vast majority of which are profitable — are continuing to operate as usual,” the company statement said. “Customers can also continue to shop for the toy and baby products they are looking for online.”

Toys ‘R’ Us said it expects to continue honoring return policies, warranties and gift cards, and customer loyalty programs should stay the same.

In a separate statement late Monday, the company said its online sales sites worldwide remain open for business during the court-supervised process.

The company has nearly 65,000 employees worldwide.