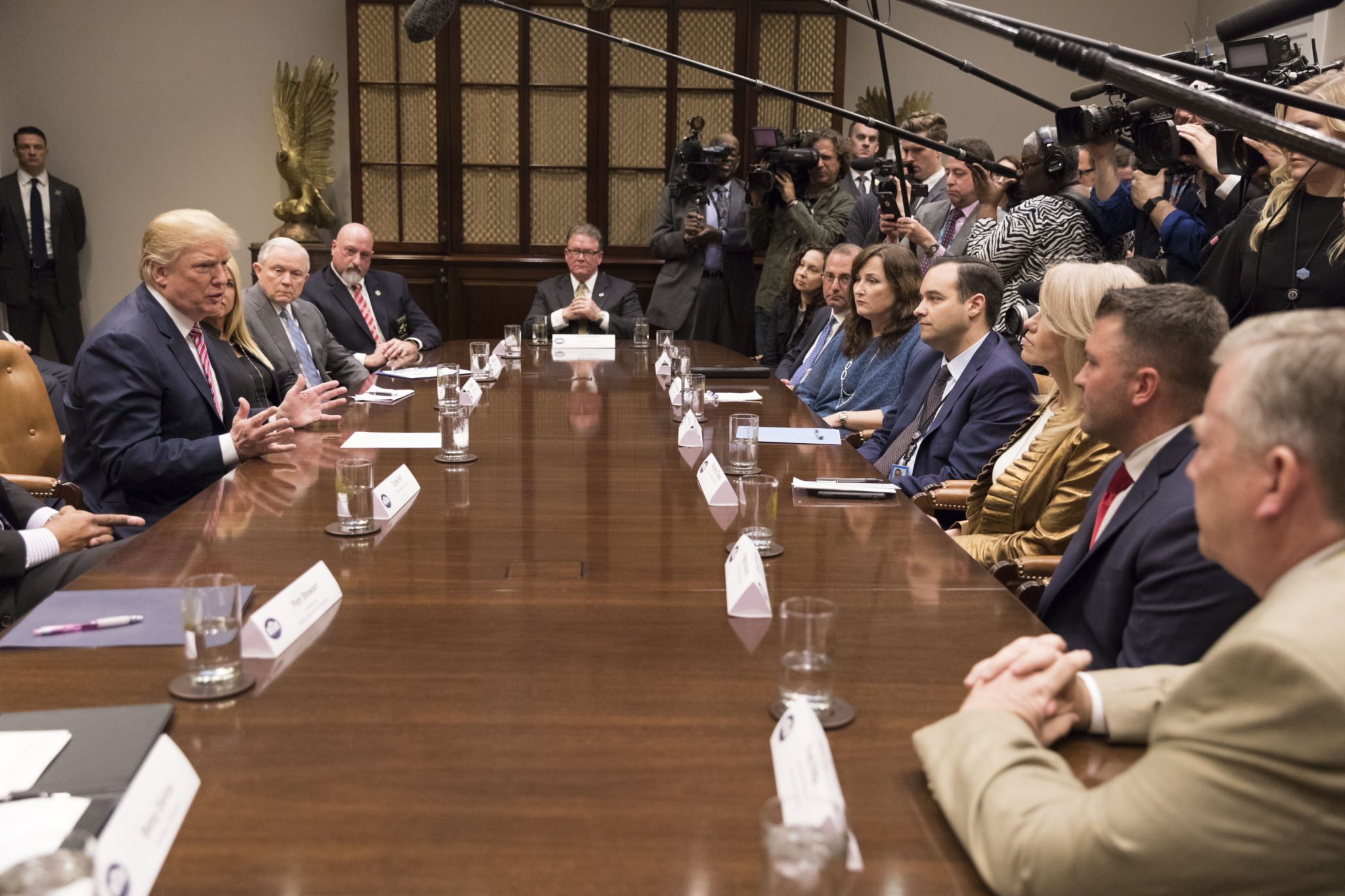 WASHINGTON (AP) — Putting fellow Republicans in the hot seat, President Donald Trump is calling for quick and substantial changes to the nation’s gun laws even as he criticizes lawmakers for being too fearful of the National Rifle Association to act.

Trump held a freewheeling, televised meeting with lawmakers at the White House that stretched for an hour Wednesday, and he rejected both his party’s incremental approach and its strategy that has stalled action on gun legislation.
Giving hope to Democrats, he said he favored a “comprehensive” approach to addressing violence such as February’s shooting at a Florida high school, although he offered no details.

Instead, Trump again voiced support for expanded background checks. He endorsed increased school security and more mental health resources, and he reaffirmed his support for raising the age to 21 for purchasing some firearms. Trump mentioned arming teachers, and said his administration, not Congress, would ban “bump-stock” devices that enable guns to fire like automatic weapons with an executive order.

“We can’t wait and play games and nothing gets done,” Trump said as he opened the session with 17 House and Senate lawmakers. “We want to stop the problems.”

Trump raised eyebrows by suggesting that law enforcement officials should be able to confiscate people’s firearms without a court order to prevent potential tragedies.

“Take the guns first, go through due process second,” he suggested.

Trump arose Thursday with the gun issue on his mind, tweeting that “Many ideas, some good & some not so good,” emerged from the meeting.

He said “Background Checks a big part of conversation” and “Gun free zones are proven targets of killers.”

“After many years, a Bill should emerge. Respect 2nd Amendment!” and the constitutional right to bear arms, the president said.

The president has previously supported ideas popular with Democrats, only to back away when faced with opposition from his conservative base and his GOP allies in Congress. It was not clear whether he would continue to push for swift and significant changes to gun laws, when confronted with the inevitable resistance from his party.

Still, the televised discussion allowed Trump to play the role of potential dealmaker. Democratic lawmakers made a point of appealing to the president to use his political power to persuade his party to take action.

Trump’s call for stronger background checks, which are popular among Americans, has been resisted by Republicans and the NRA. Republicans are leaning toward modest legislation designed to improve the background check system. Trump made clear he was looking for more and accused lawmakers of being “petrified” of the gun lobby.

“We have to stop this nonsense.”

The White House is expected to reveal more on the president’s plans for school safety this week. That announcement will likely include goals for background checks and bump stocks, though whether age restrictions will be specifically addressed remains unclear, according to an administration official who spoke on condition of anonymity to discuss private conversations.

Trump rejected the way Republican leaders in Congress have framed the debate, saying the House-backed bill linking a background check measure with a bill to expand gun rights by allowing gun owners to carry concealed weapons across state lines was not the right approach.

The concealed carry measure is the gun lobby’s top legislative priority. But “you’ll never get it passed,” Trump told lawmakers, reminding them that Democratic senators, including some in the room, strongly oppose it.

He suggested Republicans should focus on the background check bill, then load it up with other gun control and safety measures.

Among those at the meeting were Sens. Pat Toomey, R-Pa., and Joe Manchin, D-W.Va., who are pushing their bill to broaden background checks to include pre-purchase reviews at online and gun show sales. It failed twice in the Senate after the 2012 Sandy Hook Elementary School shooting in Connecticut.

Trump asked Toomey if his plan to expand background checks included raising the minimum age for young people to buy an assault weapon. Toomey told the president it did not.

“You know why,” Trump scoffed. “Because you’re afraid of the NRA.”

In fact, Toomey is one of the most high-profile Republicans on gun legislation, and the bill was opposed by the NRA.

After earlier votes on the bill, the group downgraded its rating of the senator as he ran for re-election.

Toomey said Thursday that he didn’t fear the NRA, and he called on Trump to back the measure, believing it has a better chance now.
“The president really could make the difference,” Toomey told “Fox and Friends,” contending that Republican senators previously opposed are reconsidering their positions.