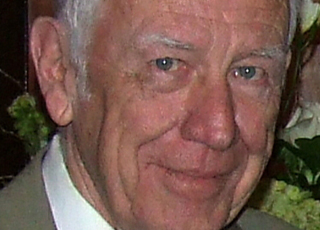 Facebook
Twitter
Linkedin
Email
Print
A memorial service for William Duane Cloud (Duane) was held at 2 p.m. on Friday, May 6 at St. James Episcopal Church in Shreveport with the Rev. Lois Maberry officiating.

The funeral service will be held at 3 p.m. on Saturday, May 14 at St. John’s Episcopal Church in Minden with the Rev. Frank Hughes officiating and the Rev. Wayne Carter preaching. A reception will be held immediately following the service in the Parish Hall. A private interment will be held later.

Mr. Cloud was born in Castor and died in the Cottages at the Glen following a brief illness. He had been a resident of Minden for most of his life.

A graduate of Castor High School, he received a bachelor’s degree in accounting and later earned his MBA at Louisiana Tech University. There he met, and then married his wife of 58 years, Martha Ann Hatcher Cloud (Marty). They chose to raise their family in Minden where he opened a CPA firm (Shaffer & Cloud). He was a civic leader in Minden serving as president of the Chamber of Commerce, Lions Club, and the Jaycees. He later was the president of People’s Bank, and finally in the oil and gas business in North Louisiana.

His interests always included children, his church, community service and those in need. After retiring he spent many years volunteering as a math tutor for struggling students in the area. Over the years, he was involved with St. Jude’s, Kairos Outside, Habitat for Humanity/Fuller Center for Housing and in the study and teaching of multiple bible courses including the Bethel Bible course.

The family would like to thank the staff of the Cottages at the Glen for the wonderful care given to Duane during his stay there. They also offer appreciation to St. James for the care and ministry they provided Mr. Cloud during his three year residence at the Cottages. Finally, they offer thanks to St. John’s where Duane and Marty raised their family and served for the past 50 plus years.

The family requests that in lieu of flowers, memorial gifts be made to Fuller Center of Webster, P.O. Box 155, Springhill, LA 71075 or Shreveport-Bossier Community Renewal, 1700 Buckner St., Shreveport, 71101 or to a charity of their choice.