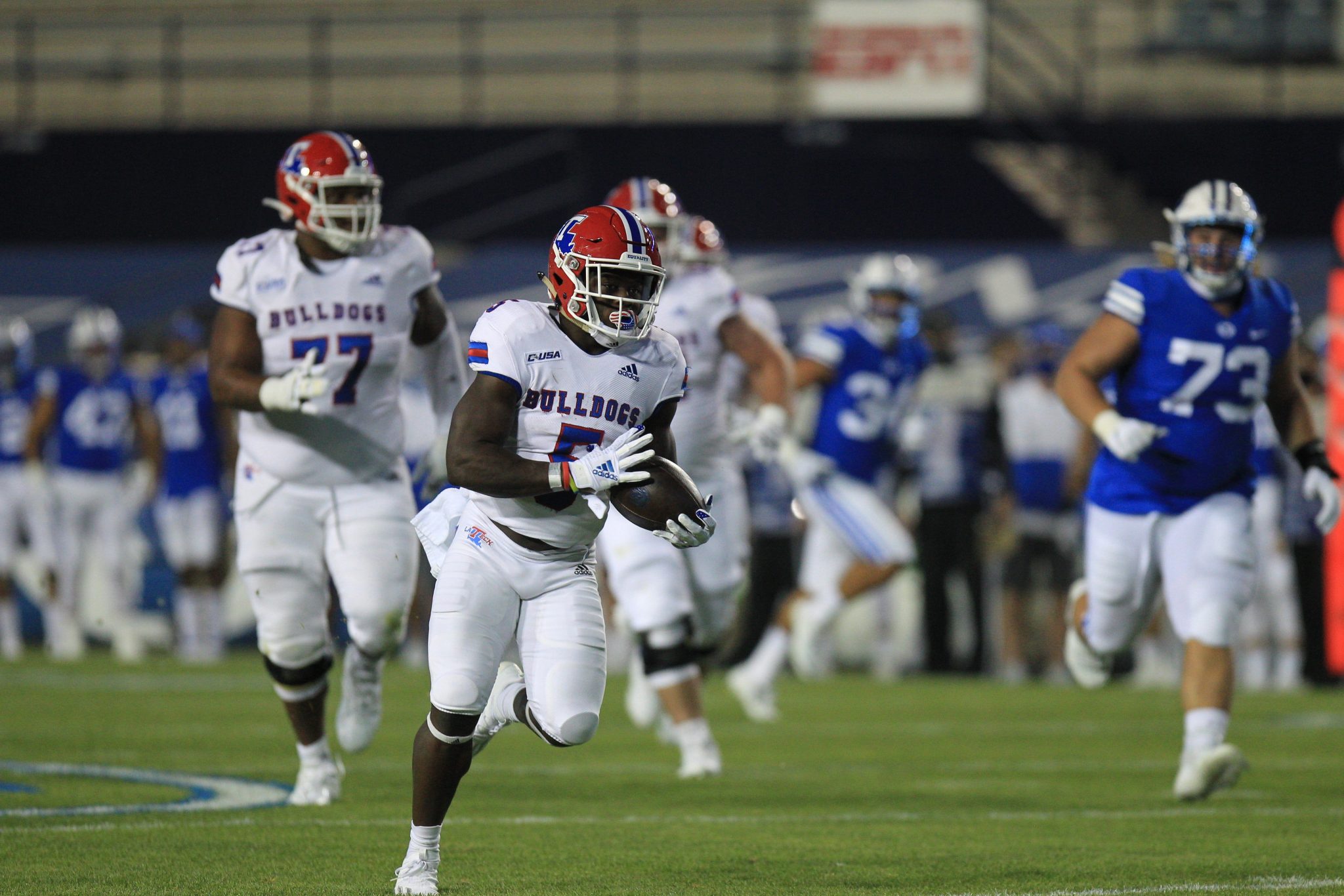 PROVO, Utah – Quarterback Zach Wilson accounted for five of No. 22 BYU’s six touchdowns as the Cougars secured a 45-14 victory over Louisiana Tech at LaVell Edwards Stadium on Friday night.

BYU struck first in Friday night’s matchup with Wilson’s first of three rushing scores. The Bulldogs, however, responded in just over three minutes when quarterback Luke Anthony connected with wide receiver Smoke Harris to tie Friday’s matchup at 7-7 with 6:51 remaining in the first quarter. The redshirt sophomore made the catch behind the line of scrimmage on the left side and then made three Cougars miss as he streaked into the end zone for a 66-yard score.

Following Harris’ touchdown grab, the Bulldogs (2-1) forced a stop when true freshman linebacker Tyler Grubbs forced a fumble on fourth-and-1 at the LA Tech 43. The two-yard loss set up Tech at its own 45, but the Bulldogs failed to cash in as BYU’s Troy Warner intercepted Anthony’s pass at the Cougars’ 21-yard line just three plays later.

BYU (3-0) rattled off the game’s next 38 points, including 21 in the second quarter to take a 28-7 halftime lead. Wilson passed for two touchdowns and rushed for scores of nine yards, one yard and 14 yards to complete his five-touchdown performance.

“BYU is a very talented football team, and they did a really nice job,” head coach Skip Holtz said. “We made things a lot easier than they needed to be from a defensive standpoint. It’s just about executing the things we’re supposed to be doing.

“We tried to come into this game and simplify things with a young football team on the road, and we did not execute very well. We’ve got to do a better job of doing the routine things.”

Tech added a touchdown at the 4:58 mark in the fourth quarter when Anthony again hooked up with Harris, trimming the score to the game’s final tally. The final touchdown of Friday’s contest was a four-yard strike, giving Harris his second two-touchdown performance of his career. Harris finished with a team-high 82 yards receiving, while Anthony led the way through the air with 191 yards on 18-of-27 passing.

Redshirt senior defensive back Zach Hannibal led the Bulldogs’ defense with seven total tackles, including six solo stops. Hannibal’s seven stops ranked as a career high, amassing two more tackles on Friday than he did in LA Tech’s Independence Bowl victory over Miami this past season.

Trey Baldwin and Grubbs added five tackles apiece. Grubbs finished with two tackles for loss and a forced fumble, which was the first of his career.

“We’ve played three really good quarterbacks, and he’s far and away the best we’ve played. But we’ve got to get better, it’s not an excuse.”

Harris’ 66-yard score was Tech’s longest play from scrimmage since an 80-yard reception from Isaiah Graham against North Texas this past season. The score marked the first time BYU had allowed a score in the first quarter this season. BYU entered Friday’s matchup allowing just 10 total points in two games so far in 2020.

Tech returns home to Joe Aillet Stadium on Oct. 10 for a Conference USA matchup against UTEP (3-1). Kickoff against the Miners is set for 6:30 p.m. and will be televised on ESPN2.