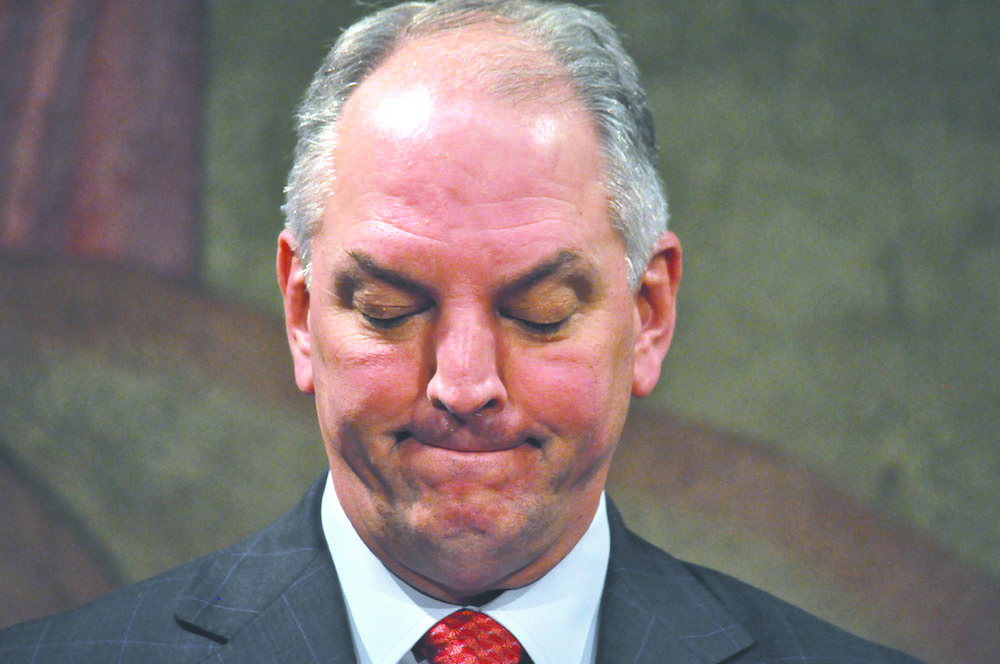 Mistrust, bickering blamed for lack of solution to budget shortfall

BATON ROUGE– With the collapse of the special session on Monday without any solution to the state’s budget problems, legislators in both parties are warning that all the bickering and mistrust will make it harder for them to come together on other important issues.

Gov. John Bel Edwards said in a post-session news conference that House Speaker Taylor Barras, R-New Iberia, reneged on a promise in early February to deliver 40 GOP votes for proposals to raise $440 million of revenue. Edwards said Barras cut that offer down to $220 million when the session opened a week later without even telling him and then failed to deliver on that.

Barras’ behavior “caused tremendous problems that we never recovered from in this session,” the governor said, referring to it as “a spectacular failure of leadership in the House.”

Edwards’ assertion about Barras, who did not respond to a request for comment, is one example of the allegations of broken faith on both sides in what Edwards called a “totally dysfunctional” session permeated with distrust and political maneuvering.

On Sunday, a last-ditch effort to find solutions to a projected $1 billion budget shortfall disintegrated when a majority of Democrats voted down a Republican bill to extend a quarter penny increase in the sales tax out of fear that Republicans would renege on a compromise to support New Orleans Democrat Walt Leger’s bill, which limited income tax deductions.

Edwards’ statement came several days after Rep. Barry Ivey, R-Central, and others said on the House floor that some Republicans were stalling action on tax reforms to prevent Edwards from having a “win” ahead of his 2019 reelection campaign. Edwards said while that mentality may not dominate the legislative body, it is hampering progress.

“The level of acrimony and distrust is more than anything I’ve seen in my 10 years in state government,” he said. He added that “some obstructionists” in the House were “hurting the state of Louisiana because we have a big problem to fix, and so long as they’re motivated by that, then they’re not focused on fixing the problem.”

Ivey said in an interview that he felt “there’s never been such little effort put in to try and actually solve our state’s problems.”

“I believe the most frustrating thing and the saddest thing in my short tenure – this is my sixth year – is that the political toxicity has become so bad that it seems like it almost makes it impossible to actually work together,” he said.

Ivey said he feared that with the session’s implosion, the tensions “would continue to rise probably to a point which we’ve never seen before where the heels get dug in deeper and the possibility of working together really dissipates.”

Others agreed that they don’t see an end to the negativity and apathy any time soon. Rep. Jack McFarland, R-Jonesboro, said representatives have turned on members within their own party and the continued fracturing makes it difficult to build consensus.

McFarland said roughly five groups are developing within the House, ranging from the ultra-conservative “party of no” Republicans to the Legislative Black Caucus, which emerged as a strong voting force this special session.

The freshman legislator said tensions among the groups require time to mend and a guiding hand. But “I’m just not very optimistic that’s going to happen in this term that I’m currently serving,” McFarland, whose first term ends in 2020, said. “I think the bridges have been burned, and I don’t believe they’re going to be mended.”

Rep. Ted James, D-Baton Rouge, said changes to House leadership and an overhaul of committee assignments are needed to relieve tensions, but he doesn’t see that happening.

Rep. Joseph Bouie, D-New Orleans and Legislative Black Caucus chair, said the distrust in the session also resulted from Republicans tying bills that tightened Medicaid eligibility to revenue ones even though they were not germane to the fiscal cliff.

“In our opinion, as Democratic Caucus and as Black Caucus, we felt the so-called reforms were just ways to really punish those who are the least of us,” he said. “You know to have Medicaid recipients have to jump through hoops to receive healthcare is unconscionable, so we did not want to do that.”

Rep. Patricia Smith, D-Baton Rouge, another Black Caucus member, said the lack of trust was not one-sided. Republican members also lacked faith that Leger could keep his bill as it was, fearing that amendments in the Senate would have expanded it to alter income tax brackets, a move they opposed. Some Republicans also doubted that the budget hole will end up being as large as the governor’s $1 billion estimate.

Lawmakers are facing nearly $1 billion in cuts when the special session convenes March 12, with key services including health care and higher education poised to take the brunt of cuts. The governor’s doomsday budget, which assumes there will be no new revenue to replace an expiring penny of sales tax, slashes the entire appropriation for the popular TOPS scholarship program, a $233 million hit, and cuts higher education institutions by nearly $26 million. Health care would lose 20 percent of its general fund budget, roughly $490 million, followed by nearly $1.5 billion in federal matching dollars.

Legislators’ options for cuts are largely limited to these two high-profile areas because they are the biggest discretionary spending pots in a budget bound largely to services and funds mandated by statute or the Louisiana constitution.

Bouie said “there’s a fundamental difference in belief systems” as Republicans believe the state has a spending problem while Democrats suggest there is a revenue problem.

Edwards said fiscal conservatives who insist on cutting their way out will be hard pressed to pass a budget in the regular session. “I don’t believe it’s possible,” he said.