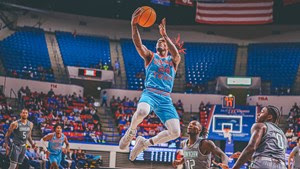 Louisiana Tech suffered just its second loss at home this season, falling 81-74 to UAB on Saturday afternoon inside the Thomas Assembly Center on Karl Malone Court.

LA Tech (10-8, 3-4 C-USA) got a combined 50 points from its backcourt of Cobe Williams and Keaston Willis, but UAB dominated the glass to the tune of 21 offensive rebounds that they cashed in for 30 second-chance points.

Williams and Willis had 23 of the team’s 35 first-half points as the Bulldogs held a slim 35-34 advantage at the midway point.

LA Tech punched back though, producing an 8-0 run that included a three-pointer and offensive rebound/putback by Quandre Bullock to get to within one.

The two teams traded baskets for the longest time, but it was after the eighth tie of the game at 60-60 that the ‘Dogs began to separate themselves. It was a four-minute stretch that saw the Bulldogs limit the Blazers to just two points while the home team knocked down six free throws and got a pair of buckets in the paint by Willis and Williams.

LA Tech had its largest lead at 70-62 with 4:46 to go. However, UAB took advantage of Isaiah Crawford picking up his fifth foul via a technical, and ended the game on a 19-4 run.

The Bulldogs were only able to force eight turnovers, but did knock down 10 three-pointers and 22 free throws while shooting 43.8 percent from the field. Williams finished with a career-high 27 and Willis had a season-high 23.

The Blazers shot just 37.1 percent from the field, but took 14 more shots. Eric Gaines led the visitors on offense with 22.

“[The last five minutes] came down to maturity. We let them get into our heads a little bit. We lost Isaiah to a double technical after already having four fouls. At the end of the day though, the game came down to offensive rebounding. That is a toughness thing. It was the ones they were getting at the free throw line that really frustrate you as a coach. We have to be tougher and hit bodies.”

“Doing your job is the mature thing to do. It is when you have an assignment, you need to take care of your assignment. It is keeping your cool when the other team is going at you. I do not think we are far away when it comes to wins and losses. Today came down to a possession and we give up an offensive rebound on the free throw line. It starts in practice and then you get ready for the next opponent.”

Keaston Willis
“We knew UAB was big and like to bang. We gave up 21 offensive rebounds and 30 second-chance points. If we eliminate that to even half, we probably come out with a win. It is the little things we have to get better at.”

“We have to have more maturity, being mentally tough. The last four minutes came down to mental toughness and we did not have it. I have to be more vocal and help lead this team.”