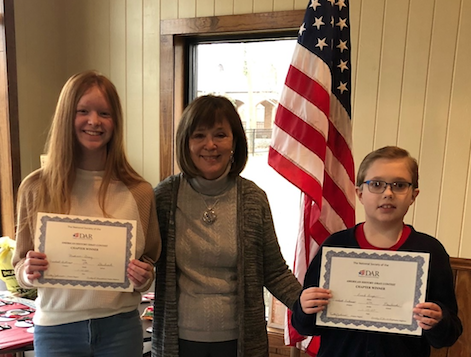 Dorcheat-Bistineau Chapter Daughters of the American Revolution hosted the annual DAR American History Essay Contest, open to students in grades 5 through 8. This year’s essay topic was “The Tomb of the Unknown Soldier “ to mark the 100th anniversary of the dedication of the tomb.  Students were asked the following: Imagine that you had a brother who lost his life on the battlefields of France during World War I. You and your family attended the November 11, 1921, dedication of the Tomb of the Unknown Soldier in Washington, D.C. Describe what this meant to you and your family. Why is it important to remember those who gave their lives to serve our nation?

Our winners were: Bryan Buck (5th grade), Bennett Speer (6th grade), and Madison Grey (8th grade), who attend Glenbrook. Our chapter Regent, Kathy Johnson, presented the winners with certificates at the January DAR meeting. They will also be presented with medals at Glenbrook’s end-of-the -year program. The winning essays have been sent to the state level competition.  Hostesses for the January meeting were Mary Beth Edwards, Mary Claire Kettler, and Jane Sistrunk.