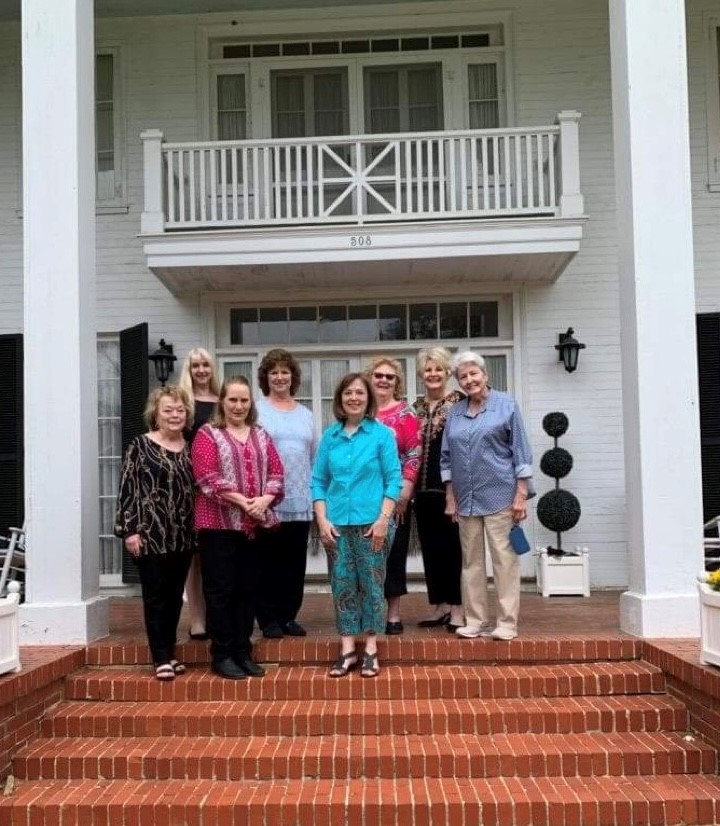 Members of Dorcheat-Bistineau Chapter Daughters of the American Revolution met at the home of Frances and Mickey Love in the Minden Historic District near Academy Park. The 3-story house, constructed of cypress wood, was built in 1848 on 400 acres of land. The land was gradually sold off, and is now a part of City of Minden. The home features hand-planed front porch columns, and heavy solid-wood interior doors of peg-and-groove construction, in which pieces of wood are perfectly fitted together without the use of nails. The original kitchen is a separate building behind the house. Keeping the kitchen separate from the main house helped prevent house fires. At the end of the tour, the Loves treated their guests to desserts and a choice of coffee or mint juleps.

Frances is a cousin of Margaret Mitchell, author of Gone with the Wind, and she shared stories about Margaret that have been passed down through the family. When Margaret was about 6 years old, she starting going with her father when he visited elderly friends who had lived during the Civil War. Her book was based on the stories they told, and the characters were based on her friends and relatives. Like Scarlett O’Hara’s mother Ellen, Margaret’s mother Maybelle died due to an illness she contracted while helping families in need. Rhett Butler was based on Margaret’s first husband, whom she divorced, and Ashley Wilkes was based on her second husband. She began writing Gone with the Wind when she was bedridden with a broken leg and she needed something to do. She let a New York publisher take her manuscript to read. When she called him to get her manuscript back, he told her they wanted to publish it but she needed to write a Chapter 1 for it.

We are excited to welcome Nancy Grantham as a new member of our chapter! Her patriot ancestor is William Morgan who was born on January 6, 1766 in North Carolina. A document by Gen. Elijah Clark dated March 3, 1784 certified that he was a soldier in the American Revolution. He fought at the Battle of Kettle Creek in Wilkes County, GA. William married Sally Ware who was born on December 25, 1765 in Virginia.

DAR is an educational, patriotic, and historic organization. Any woman 18 years or older who can prove lineal, bloodline descent from an ancestor who aided in the American Revolution (1775-1783) is eligible to join DAR. Please visit dar.org for more information, and visit our Facebook page: Daughters of the American Revolution – Dorcheat-Bistineau Chapter