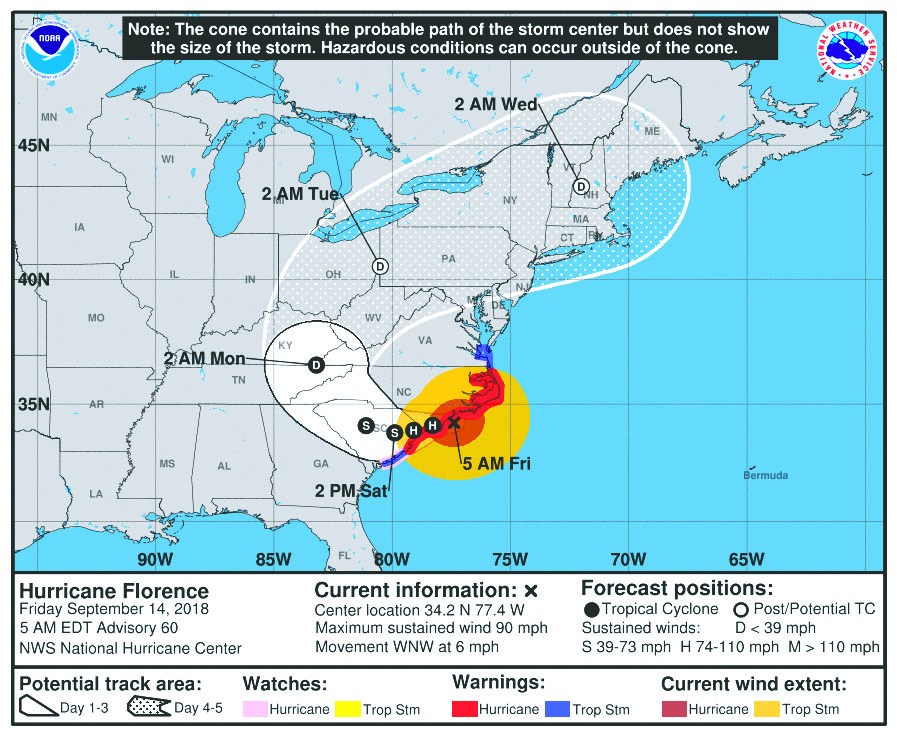 More than 60 people had to be pulled from a collapsing motel at the height of the storm, and many more who defied evacuation orders were hoping to be rescued. Pieces of buildings ripped apart by the storm flew through the air.

Most ominously, forecasters said the terrifying onslaught would last for hours and hours because Florence was barely creeping along at 6 mph (9 kph) and still drawing energy from the ocean.

Florence made landfall as a Category 1 hurricane at 7:15 a.m. at Wrightsville Beach, a few miles east of Wilmington, as the center of its eye moved onshore, the National Hurricane Center said.

Coastal streets flowed with frothy ocean water, and more than 460,000 homes and businesses were without power, mostly in North Carolina, according to poweroutage.us, which tracks the nation’s electrical grid.

Forecasters said “catastrophic” freshwater flooding was expected along waterways far from the coast of the Carolinas.
Hurricane-force winds extended 80 miles (130 kilometers) from its center, and tropical-storm-force winds reached out to 195 miles (315 kilometers).

Winds bent trees toward the ground and raindrops flew sideways as Florence moved in for an extended stay, with enough of its killer winds swirling overseas to maintain its power. Forecasters said the onslaught could last for days, leaving a wide area under water from both heavy downpours and rising seas.

The wind howled and sheets of rain splattered against windows of a hotel before dawn in Wilmington, where Sandie Orsa of Wilmington sat in a lobby lit by emergency lights after the power failed.

The rising sea crept toward the two-story home of Tom Copeland, who lives on a spit of land surrounded by water in Swansboro. Winds knocked down trees all over.

“(Water) is as high as it’s ever been and waves are breaking on my point, which is normally grass,” said Copeland, a freelance photographer for The Associated Press. “Trees are blowing down in the wind. Nothing’s hit the house yet, but it’s still blowing.”

In Jacksonville, next to Camp Lejeune, the Triangle Motor Inn was coming apart early Friday. Firefighters and police fought wind and rain going door-to-door to pull people out after the cinderblock structure began to crumble and the roof began to collapse. They formed a convoy to an emergency operations center, according to the Jacksonville Daily News.

The storm’s maximum sustained winds held at about 90 mph (144 kph). A gust of 105 mph (169 kph) was recorded at Wilmington airport, surpassing the power of Hurricane Fran two decades ago.

Farther up the coast, in New Bern, about 150 people were waiting to be rescued from floods on the Neuse River, WXII-TV reported. The city said two FEMA teams were working on swift-water rescues and more were on the way.

The worst of the storm’s fury had yet to reach coastal South Carolina, where emergency managers said people could still leave flood-prone areas.

“There is still time, but not a lot of time,” said Derrec Becker of the South Carolina Department of Emergency Management.

North Carolina corrections officials said more than 3,000 people were relocated from adult prisons and juvenile centers in the path of Florence, and more than 300 county prisoners were transferred to state facilities.

Officials said some 1.7 million people in the Carolinas and Virginia were warned to evacuate, but it’s unclear how many did. The homes of about 10 million were under watches or warnings for the hurricane or tropical storm conditions. Coastal towns in the Carolinas were largely empty, and schools and businesses closed as far south as Georgia.

Forecasters said Florence’s surge could cover all but a sliver of the Carolina coast under as much as 11 feet (3.4 meters) of ocean water, and days of downpours could unload more than 3 feet (0.9 meters) of rain, touching off severe flooding.

Forecasters said that given the storm’s size and sluggish track, it could cause epic damage akin to what the Houston area saw during Hurricane Harvey just over a year ago, with floodwaters swamping homes and businesses and washing over industrial waste sites and hog-manure ponds.

Florence was seen as a major test for the Federal Emergency Management Agency, which was heavily criticized as slow and unprepared last year for Hurricane Maria in Puerto Rico.

Not everyone was taking Florence too seriously: About two dozen locals gathered Thursday night behind the boarded-up windows of The Barbary Coast bar as Florence blew into Wilmington. Others were at home hoping for the best.

“This is our only home. We have two boats and all our worldly possessions,” said Susan Patchkofsky, who refused her family’s pleas to evacuate and stayed at Emerald Isle with her husband. “We have a safe basement and generator that comes on automatically. We chose to hunker down.”