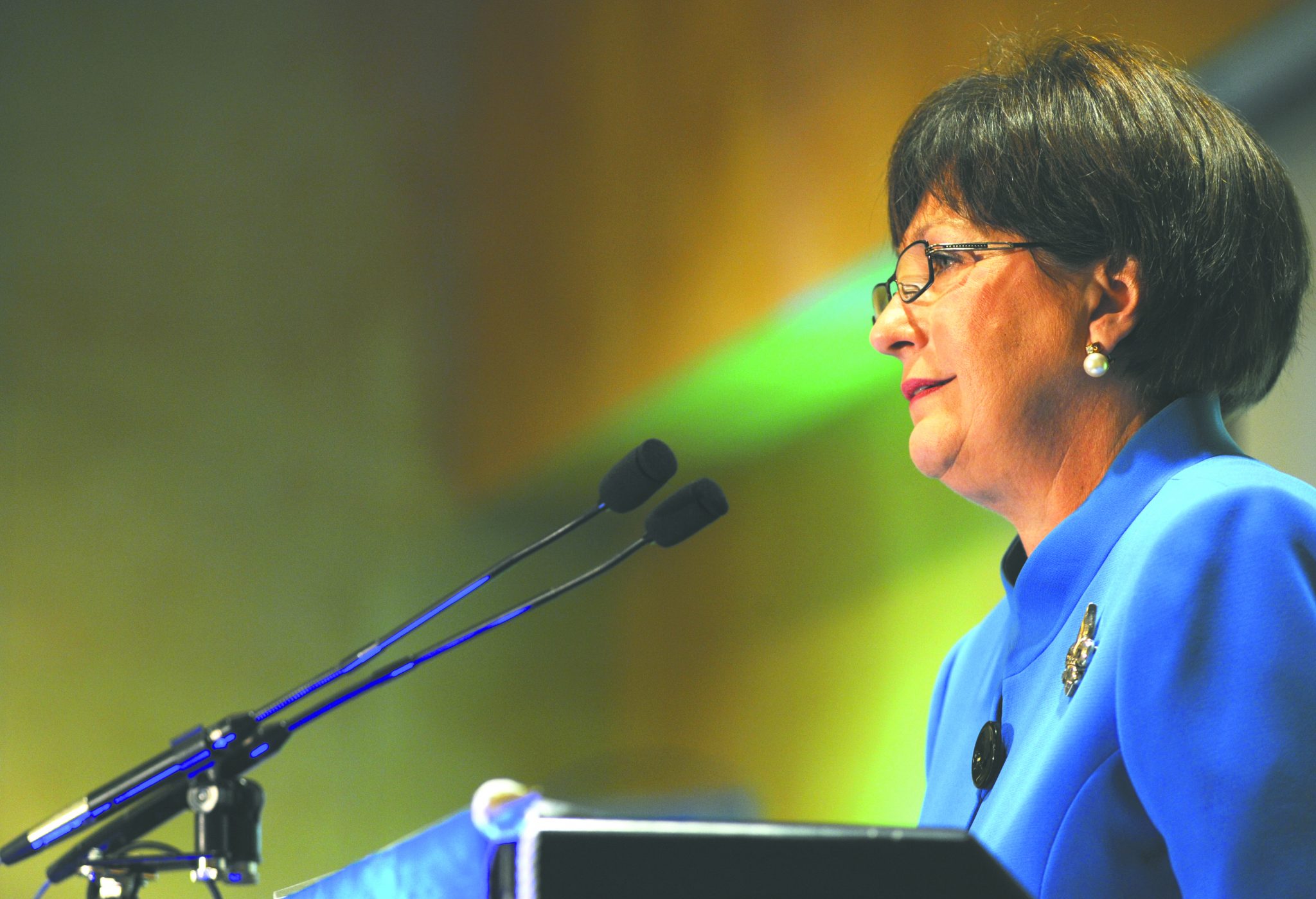 BATON ROUGE, La. (AP) — Even after Hurricane Katrina ended her political career and as cancer ate away her strength, former Louisiana Gov. Kathleen Blanco still described her life as “charmed.” With strength in her faith and her family, the state’s first elected female governor time and again refused to wallow in disappointment or disaster.

Blanco called it an “honor and blessing” to lead Louisiana through the fury and destruction of Katrina. As she knew her end was near from an incurable melanoma, Blanco talked of her final months as a “wonderful time for me.”

A pioneering woman in Louisiana politics, Blanco died Sunday in hospice care in Lafayette. She was 76.

“She was a woman of grace, faith and hope. She has left an eternal mark on all who knew her, because she was generous and unconditional in her love, warm in her embrace and genuinely interested in the welfare of others,” Blanco’s family said in a statement issued by Gov. John Bel Edwards’ office.

A Democrat, Blanco held Louisiana’s top elected job from 2004 to 2008, and served in state government offices for more than two decades. But her legacy rests with Katrina, the devastating August 2005 hurricane that killed more than 1,400 people in Louisiana, displaced hundreds of thousands and inundated 80% of New Orleans.

Historians will continue to debate whether any governor could have been prepared for such a catastrophe, but Blanco shouldered much of the blame after images of thousands stranded on rooftops and overpasses were broadcast to the world, and the government was slow to respond to the desperation.

Blanco was criticized as unprepared, overwhelmed and indecisive. While she successfully fought for billions in federal aid, the recovery she guided moved ploddingly.

Blanco said Louisiana’s miseries were worsened by a Republican-led White House desperate to blame someone else for its disaster response failures.

“I just thought I could shout more loudly than the noise around me, but in the end I couldn’t. There was just too much pain,” she once said.

Despite the criticism, Blanco said it an “honor and blessing” to lead Louisiana through Katrina and the follow-up blow of Hurricane Rita, which wrecked southwest Louisiana a month later.

“Katrina certainly left its mark and Rita left her mark on Louisiana. It made us tougher people though. It made us stronger,” the former governor said in July as she neared death.

Blanco had a rare eye cancer that she battled successfully in 2011, but it later returned and spread to her liver. She announced in December 2017 that she was being treated for the incurable melanoma.

Edwards, a Democrat mentored by Blanco, ordered flags at state buildings around Louisiana flown at half-staff through Blanco’s funeral, scheduled for Saturday. A public service for the former governor will be held Thursday at the Louisiana Capitol.

“She led Louisiana through one of our darkest hours, when hurricanes and the failure of the federal levee system devastated much of our state,” Edwards said in a statement Sunday. “I hope history will remember Gov. Blanco as a tireless advocate for Louisiana, who fought fiercely for our state to rebuild.”

Until her campaign for governor, Blanco spent much of her political career moving steadily and quietly through state politics, rarely creating waves.

A former high school business education teacher from the small Cajun village of Coteau, Blanco launched into politics as a consultant with her husband Raymond on local redistricting issues before going on to serve 24 years in elective office. Her first stop, in 1984, was a seat in the state House. Then came positions on the state utility regulatory commission and as lieutenant governor.

Before Blanco’s election as governor, political insiders often dismissed her as a lightweight — honest and hardworking but lacking in substance. She stunned many political prognosticators in the 2003 election by defeating Republican Bobby Jindal. In a memorable final debate appearance, when asked about a defining moment in her life, she tearfully recounted the 1997 death of her 19-year-old son Ben in an industrial accident.

Jindal later succeeded Blanco as governor after Katrina stopped her plans to seek a second term.

“Kathleen loved Louisiana and served the state for decades. She faced every struggle, including her last, with good cheer and a strong will,” Jindal said on Twitter.

More than a decade after the storms, views of Blanco are generally more sympathetic.

She gets praise for running a corruption-free government and championing education. She helped raise K-12 public school teacher pay and plowed hundreds of millions of dollars into colleges. She’s been applauded for her successful push for a state takeover of failing public schools in New Orleans after Katrina.

After announcing her diagnosis, Blanco offered no recriminations or angst. She talked of final days being surrounded by family and friends, described old political foes having “a chance to make up” and thanked Louisiana residents for “their abiding love.”

“While she knew that her name would forever be linked with hurricanes Katrina and Rita, it was her dying wish that she be remembered for her faith in God, commitment to family and love of Louisiana,” her family’s statement said.