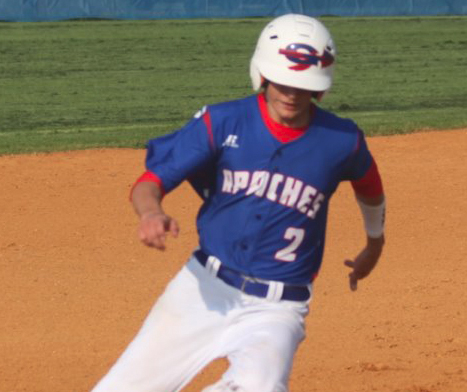 TALLULAH – The Glenbrook Apaches came back down from the high they had been riding so far in district play, losing a pair of tough ones to the Tallulah Academy Trojans Monday afternoon in Madison Parish.

The Apaches lost game one of the doublehead 9-8 after a string of errors cost them a three-run lead in the fifth inning.

The game went into extra innings where Tallulah pulled scored the winning run in the eighth for the win.

Glenbrook had four, costly errors in the contest, their first loss in district play.

Hayden Williams took the loss for Glenbrook. Tyler Perryman got the start on the mound and combined with Williams to strikeout five Trojans. The pair allowed just six hits.

Mason Hood led the Apaches, going 3-4 with a double, two singles and three RBIs. Cade Clemons and Cameron Barnette each had a two-RBI single, followed by Trevor McClean with a single.

The Apaches had to rebound quickly in order to salvage the trip to Tallulah. Unfortunately, they were unable to do so, falling in game two, 7-0.
The Apaches, probably still feeling the sting of a heartbreaking game one loss, looked sluggish at the plate and in the field, committing five errors and managing only three hits.

Glenbrook did hit the ball better than their three hits would indicate, but several hard-hit balls went right at Tallulah fielders.

Nick Mourad started and went the distance for the Apaches, but a bevy of errors and a lack of run support resulted in Mourad taking the loss. Mourad struck out five batters.

The Apaches will have a chance to exact some revenge against the Trojans when they welcome Tallulah to Apache Field Thursday at 6 p.m.