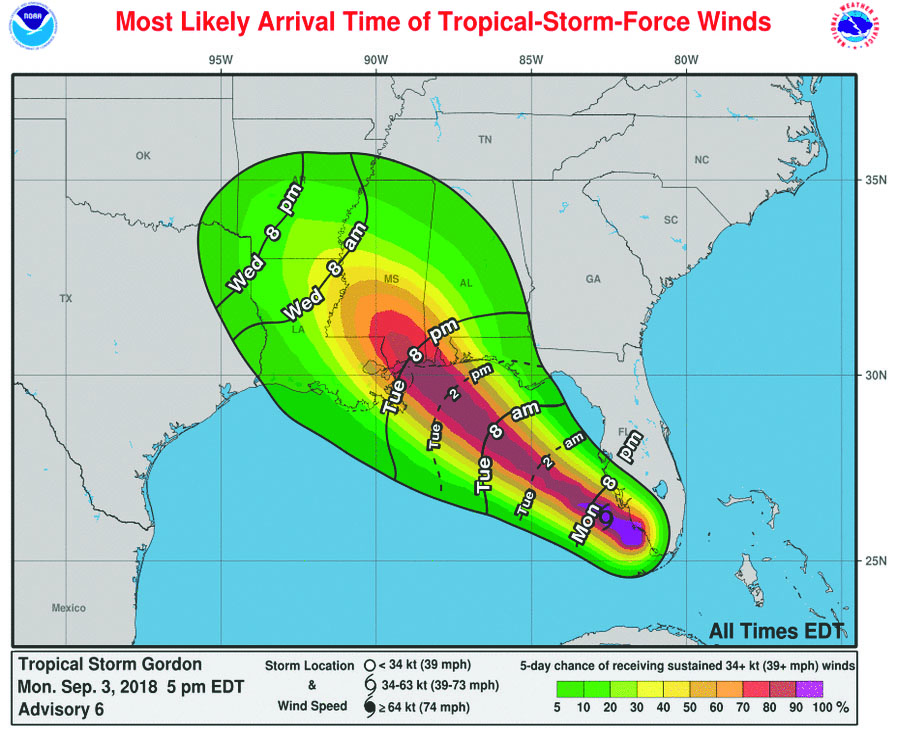 MIAMI BEACH, Fla. (AP) — Coastal residents from Florida to Louisiana hustled to prepare for a deluge as Tropical Storm Gordon grew stronger on a path to hit the central U.S. Gulf Coast as a hurricane Tuesday night. Boaters evacuated to safe harbors, motorists left barrier islands and homeowners surveyed properties that could soon be submerged in seawater.

A hurricane warning was put into effect for the mouth of the Pearl River in Mississippi to the Alabama-Florida border. The National Hurricane Center is predicting a “life-threatening” storm surge along parts of the central Gulf Coast, and as much as 8 inches (20 centimeters) of rain could fall in some parts of the Gulf states through late Thursday as the tropical weather moves over the lower Mississippi Valley.

By early Tuesday morning, the storm was centered 230 miles (365 kilometers) east-southeast of the mouth of the Mississippi River, with top sustained winds of 65 mph (100 kph), forecasters said. It was moving relatively quickly, at about 17 mph (28 kph).

A storm surge warning has been issued for the area stretching from Shell Beach, Louisiana, to Dauphin Island, Alabama. The warning means there is danger of life-threatening inundation. The region could see rising waters of 3 to 5 feet (0.9 to 1.5 meters).

“The deepest water will occur along the immediate coast near and to the east of the landfall location, where the surge will be accompanied by large waves,” the center said.

In Louisiana, Gov. John Bel Edwards declared a state of emergency Monday and said 200 National Guard troops will be deployed to southeastern Louisiana.

Pat Landry, who owns the Landry House bed & breakfast on Louisiana’s Grand Isle, said late Monday night that he was trying to pick up everything low in the yard in preparation for the storm surge expected with Gordon’s arrival.

Grand Isle Mayor David Campardelle called for a voluntary evacuation of the barrier island. The mayor noted the ongoing construction on Highway 1, the lone road that connects Grand Isle to the rest of the state, and said it could cause “severe problems” for people evacuating.

“If you leave, you have to leave before the road floods,” Landry said.

At Jo Bobs Gas and Grill on Grand Isle, cashier Emily Dorathy said they made sure the generator was ready to provide power if the electricity goes out. She said many of the locals, herself included, were planning to stay through the storm but many visitors who’d come in for the Labor Day weekend were heading out of town.

“Everybody is just waiting it out to see what is going to happen,” she said.

Gordon formed into a tropical storm near the Florida Keys early Monday, lashing the southern part of the state with heavy rains and high winds before moving into the Gulf of Mexico.

The storm’s predicted track had shifted slightly east as of Monday evening, meaning Louisiana is currently just outside the area under the hurricane warning. Still, the southeastern part of the state remains under a tropical storm warning and residents need to be prepared for the storm to shift west, Edwards said.

“This storm has every possibility to track further in our direction,” Edwards said during a news conference Monday evening.

New Orleans Mayor LaToya Cantrell said the city has “the pumps and the power” needed to protect residents. But authorities issued a voluntary evacuation order for areas outside the city’s levee protection system, including the Venetian Isles, Lake Saint Catherine and Irish Bayou areas.

Cantrell urged residents within the levee protection area to stock up on supplies and shelter in place.

Miami Beach Police said via Twitter that the Labor Day holiday was “NOT a beach day,” with rough surf and potential rip currents. Red flags flew over Pensacola-area beaches in Florida’s Panhandle, where swimming and wading in the Gulf of Mexico was prohibited. More than 4,000 Florida Power & Light customers lost power Monday due to weather conditions.

The National Weather Service said conditions were “possible” for tornadoes in the affected parts of South Florida on Monday night.

The storm left many businesses on Florida’s Gulf Coast feeling shortchanged by the holiday weekend. The area has already been heavily impacted by this summer’s so-called “red tide”— massive algae blooms that have caused waves of dead marine life to wash up along the coast.

Jenna Wright, owner of a coffee shop in Naples, Florida, told the Naples Daily News that she had expected higher numbers for the Labor Day weekend.

“This is normally a decent weekend, but the storm and red tide aren’t helping,” Wright said. “We’re a beach coffee shop, and if people can’t go to the beach, then we won’t get any customers.”

Separately, Tropical Storm Florence continues to hold steady over the eastern Atlantic. Forecasters say little change in strength is expected in coming days and no coastal watches or warnings are in effect.