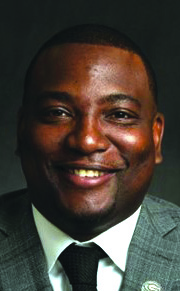 “We are excited to welcome Dr. Scott to the team and look forward to the impact he will have on the department,” said President Rick Gallot. “His commitment to the holistic development of student-athletes and experience with administration speak directly to the mission of continuing the rich legacy of athletics at Grambling State University.”

Scott comes to Grambling State after spending 10 years at Southern University where he was the Deputy Athletic Director/Chief Operating Officer and was responsible for the daily operations of the SU athletic programs.

“Grambling State University is an aspirational program in intercollegiate athletics,” Scott said. ”Steeped in history and success, the tradition of legends and barrier-breakers who call themselves GSU Tigers is unmatched. I am humbled by and grateful for the opportunity to serve as the Vice President for Intercollegiate Athletics. Grambling athletics aligns with my commitment to developing young men and women to be their very best academically and athletically.”

“I want to thank President Gallot, TurnkeyZRG search, and the members of the selection committee for entrusting me with the challenge of building upon the established excellence of the program” Scott continued. ”I will work tirelessly to ensure our student-athletes, alumni and fans remain proud of Grambling State Tiger athletics!”

Throughout his professional career, Scott has been active on the university, conference, and national levels. He graduated in 2016 from the prestigious NCAA Leadership Institute for Ethnic Minorities, 2018 of the Sports Management Institute (SMI), and has facilitated the NCAA’s Career in Sports Forum in 2016 while also serving as a member of the selection committee.

During his time at Southern, Scott spearheaded an unprecedented academic recovery of Southern Athletics as it relates to the Academic Progress Rate, making a dramatic improvement from 3 to all 15 programs meeting the APR benchmarks earning post-season access after just two full years in charge.

Scott, who has written more than $2 million in grants to support academic and student development initiatives, also guided the institution through the successful completion of the NCAA Data Review process and served as the author and principal investigator of the $900,000 NCAA AASP Grant.

A former standout basketball student-athlete, four-year starter, and team captain at Southern, Scott remains atop the school’s record books in assist, steals, and minutes played. After his collegiate playing career was over, Scott enjoyed a successful career in financial services until returning to his alma mater in 2011.

Outside of athletics administration, Scott was an adjunct faculty member in the College of Business at Southern where he taught courses in Business Administration, Management, and Sports Marketing. He holds a bachelor’s in marketing (2003) & Management (2005) and a Master’s Degree in Communications (2005) from Southern University. In addition, he completed his Ph.D. in Education/Sports Management in 2018 from Northcentral University.