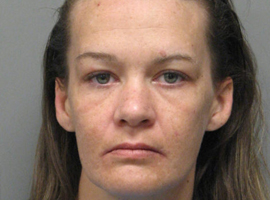 Facebook
Twitter
Linkedin
Email
Print
A Heflin woman was arrested by Minden police when they received a call regarding a collision.

Jenalea Hulion, 35, of the 100 block of Bumgardner in Heflin, was charged with DWI first offense and possession of Schedule IV CDS. She was cited for following too closely. Bond was set at $4,700.

Minden police chief Steve Cropper says his officers received a call where the caller advised they had followed a vehicle from Heflin and the vehicle struck a mailbox on the way into Minden.

“She got into Minden to South Talton Street and was involved in a minor crash,” he said. “Sgt. Joel Kendrick, Officer Terry Stephens and Officer First Class Jeremy Sitter were dispatched. When they made contact with the driver of the vehicle, they performed a field sobriety test, in which she performed poorly.”

Cropper says Hulion was placed under arrest and transported to the Minden Police Department.

During the search of the vehicle, Cropper says the search revealed a pill identified as Soma inside a prescription bottle for Oxycodone. A second Soma pill was found inside a small plastic bag.

She was transported to Bayou Dorcheat Correctional Center for booking.