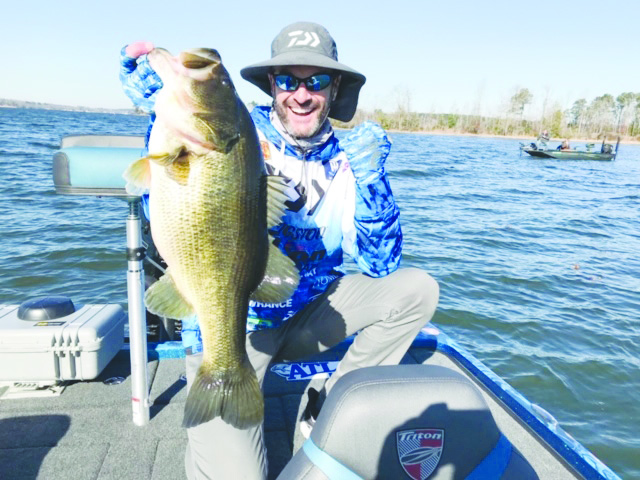 By Glynn Harris, Special to the Press-Herald

Major League fishing is an event that differs from some of the other types of competitive bass fishing and north Louisiana was in the spotlight as three of our lakes were home field for 80 of the nation’s best professional bass anglers.

Here’s how it worked; the anglers were divided into two groups for the first round of competition which took place on D’Arbonne. Half of the group fished two days, Saturday and Sunday and the remainder fished Monday and Tuesday with the top 30 earning the right to compete head to head on Caney Lake Wednesday for the Knockout round. The top 10 fishermen who survived the Caney experience headed for Bussey Brake near Bastrop for the final round to see who would endure to the end and take home a check for $100,000.

Alabama angler, Randy Howell, survived the D’Arbonne fish fest and joined the top 30 anglers to give Caney Lake a try. Howell had never fished either lake and had to make use of maps to locate features that he calculated would have the best chance to hold big bass.

While Howell was trying to figure out Caney Lake’s bass, a pair of Ruston fans were hanging in the background watching the pro fish, and although there were 30 anglers scattered around the lake, the focus of Mike and Clay Brister were on Howell.

“I have kept up with Randy because he is a special fellow,” said Mike Brister. “He is not only a great bass angler but he’s a good Christian. He and his wife are affiliated with King’s Home, an organization that works with abused women.”

Brister was keeping up with the score tracker that pings every time one of the pro anglers caught a bass and as it started to light up while nothing was showing up in Howell’s corner, the duo started considering moving around the lake to where more action was going on.

“We thought about moving on but I was telling Clay we should just wait a few minutes more and a minute after saying that,” Brister said. “I saw Howell rare back as he was loaded up on a good fish.”

As they watched Howell fight the big bass, it was obvious he was into a really big one and excitement grew as they watched him bring the big Caney fish into the boat.

“We were anxiously watching and listening when he put the bass on the scale and Randy hollered out ’10-11!’ Clay and I did some hollering ourselves,” said Mike.

The bass was the biggest Howell had ever caught and proved to be the heaviest ever taken in the Major League Fishing event. Howell, however, was just getting started.

Having now qualified for the final championship round where he would be included in the top 10 anglers, Howell headed for Bussey Break Thursday for the finals.

Writer Lynn Burkhead wrote the following description of what happened.

“Like he had done barely 24 hours earlier, there was a magical thump at the end of the line and a fight to remember, this time with fans watching online. Howell wrestled the giant double-digit lunker to the boat and then a couple of heart-stopping moments as he tried to land the fish. Eventually he was able to lip the huge bass, hoist it into the boat and wildly celebrate as the boat official let the scales do some talking to the tune of 12 pounds, 14 ounces.”

Howell caught only one other fish that day, one under 4 pounds to go with his giant but his two fish netted him a sixth place finish and a nice check for his efforts.

“To say this was a memorable day would be an understatement,” Howell said. “I can’t believe I caught my two biggest bass ever and did it two days in a row.”

Burkhead summed it up like this … ”Howell certainly has his own reasons to be thankful to the tune of two back-to-back bass weighing more than 23 pounds combined. That’s a dreamy week of bass fishing, no matter who you are.”