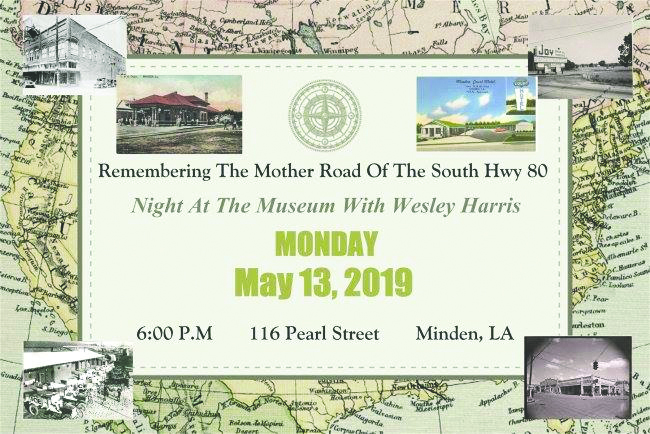 Speial to the Minden Press-Herald

Monday May 13, 2019 will be 66th museum speaking event since 2007.  Lincoln Parish historian Wesley Harris will be making his second presentation for 2019.

The importance of Highway 80 to the economic, cultural, and historical legacy of North Louisiana will be the subject of the evening.

The museum events are held in the Media/Learning center at the Dorcheat Historical Association Museum, 116 Pearl Street, Minden, La. Museum doors will open at 5:30 p.m., with first-come, first-serve seating. Program begins at 6 p.m. Admission is free with donations being accepted. Potluck desserts and snacks are welcome.

U.S. Highway 80: America’s “True Mother Road” U.S. Highway 80 is the only American thoroughfare to stretch continuously from coast to coast.

While much of it has been abandoned or decommissioned, before the Interstate System was created, Highway 80, also known as the Dixie Overland Highway, was the primary east-west highway in the southern half of the nation.

It originally ran from Savannah, Georgia to San Diego, California. Some have called it America’s “True Mother Road,” referring to the moniker given to U.S. Route 66, advancing the idea that U.S. 80 probably carried more people west seeking new fortunes than the shorter route running from Chicago to Los Angeles.

U.S. Highway 80 has been the scene of significant historical events. President John F. Kennedy was traveling on U.S. 80 in Dallas when he was shot and killed. One of the best known civil rights protests in American history—the series of marches from Selma to Montgomery and “Bloody Sunday”—occurred on U.S. 80.

Within Louisiana, U.S. 80 stretches completely across the state from Mississippi to Texas, passing numerous military facilities, three 4-year state universities, and most of the parish seats of the parishes it crosses.

For more information contact Schelley Brown Francis at 318-377-3002 or visit www.museuminminden.blogspot.com to sign up for the museum email blast.

The museum admission is free. Also open for special tours and rental by appointment.