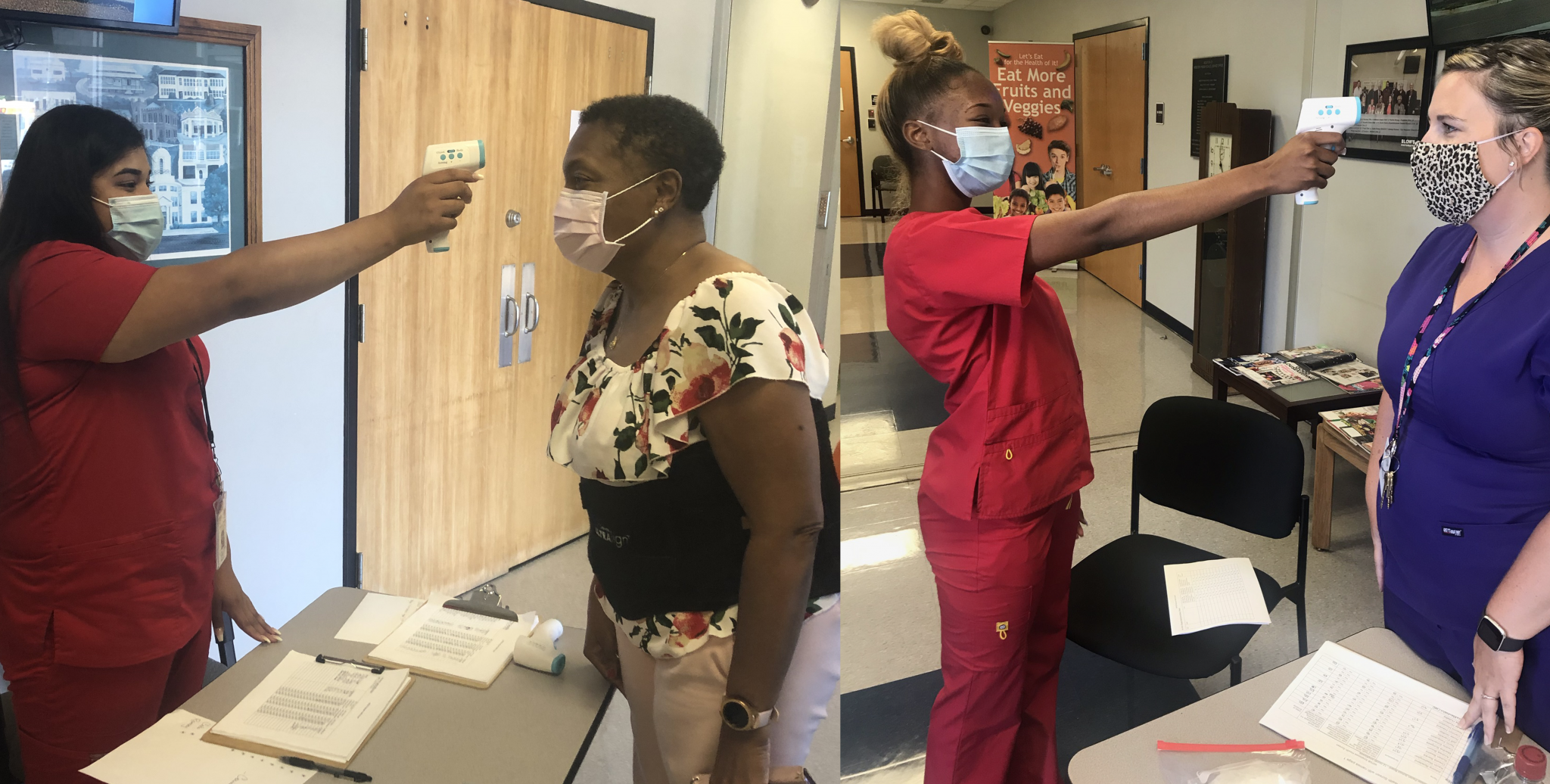 Beverly Smith, Jumpstart Coordinator and Director of the Harper Center, wanted to showcase two successes of our own local Jumpstart program who helped to fill in a much-needed position at the Webster Parish School Board Office. That position is one that has been cropping up in many businesses and workplaces given the pandemic, that of having someone to check those wishing to enter the premises for symptoms of COVID-19.

The two individuals that the Jumpstart program chose were Cynthia Hernandez and Paradise Ford, two recent graduates of the Certified Nursing Assistant Program. Initially, Ford has been the one in the position, but moving to pursue her education further, the position is now filled by Hernandez.

Ford said of the Jumpstart program, “I think the program is a wonderful way for students to interact with peers and gain life essential lessons that impact professionally and personally. It’s the perfect opportunity for one to get an idea of what profession they’d like. Doing the CNA program you also gain life long mentors that are willing to help you in any way.”

Hernandez stated, “I feel like everyone should take a chance on it, especially the ones who are interested in the medical field.”

While most would think the key to Jumpstart is giving people a foot in for the jobs they want, it can also be a learning experience for students to figure out which jobs they don’t like as well.

In Hernandez’s case, the job experience that came with her time in the Jumpstart program gave her early indicators that she might not enjoy that career path and might start looking to other alternatives.

“I was interested in doing nursing, but now that I’ve experienced the CNA route, I’ve seen that they have a stress level that they have to deal with, so instead of nursing, now I want to do something else.”

When going more in-depth about the program, Jumpstart Coordinator Beverly Smith stated,  “Jumpstart is one of the two graduation pathways that students have, one being jumpstart and one being Jumpstart, the other being university.”

“Jumpstart prepares students for entry-level job skills. Our Jumpstart students typically start at a two-year college or some form of technical training, but they can go on from there to the four-year university.”

While described as two different pathways, Smith conveyed that they are not mutually exclusive, and affirms that students who plan on attending a four-year college straight out of high school can still find something to gain out of the program.

“It’s for everybody, because everyone needs some sort of skill when leaving school. We try to encourage every student, whether they are on the university pathway or the Jumpstart pathway, that there is something there for them that they can benefit from,” said Smith.

Assistant Superintendent Kevin Washington said of Jumpstart, “This program is an excellent opportunity. It’s a gateway for students to do many things. They can start there, and they can leave high school with credentialing, and a high school diploma.”

“It’s a wonderful program, I think a lot of people don’t know about it yet, so we really need to get out there and encourage our students, and say hey, this is something you can do. So we’re excited about it.”

It was stated that students and parents/guardians who are interested in the Jumpstart program should contact their school administrator/counselor, who can provide them with more information about the program.