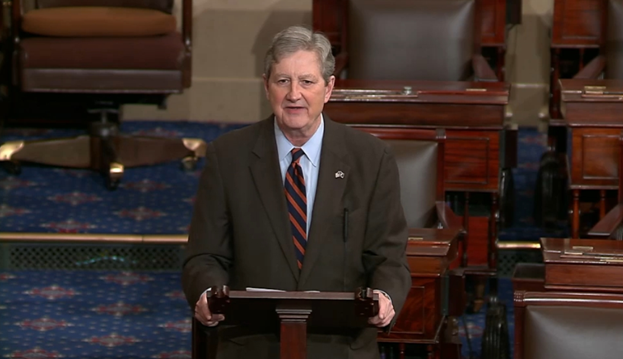 WASHINGTON, D.C. –U.S. Sen. John Kennedy (R-La.) delivered a speech on the Senate floor today about the need for immigration reform, including constructing a border wall, reforming U.S. asylum laws and calling an immigration summit to address the crisis at the southern border.

“Now, we’re a nation of immigrants, and I’m proud of that,” said Sen. Kennedy. “Americans cannot be called anti-immigrant. Every year we welcome a million people across the world to become Americans (and) to come into our country. They do it legally. They follow the law. They’re properly vetted. They get in line. They wait patiently, and we welcome them in.”

Border wall: “We do have a problem at the border. ‘Problem’ is an understatement. In March, we had 100,000 people come into our country illegally. One hundred thousand. That’s the most in 10 years. If that continues, we’re going to set a record this year for people entering our country illegally.”

“We’ve got to solve this problem ourselves. The first thing we have to do is build a wall. I’m not talking about a wall from sea to shining sea. We have 1,900 miles of border. I’m talking about barriers strategically placed. You cannot seal a 1,900-mile piece of real estate without a barrier. It can’t be done.”

Asylum law reform: “The second thing we need to do, Madame President, as you well know, is to pass asylum laws that look like somebody designed the things on purpose. Because what we have now, doesn’t fit that description.”

“This United States Senate should be debating America’s asylum laws right this second. I’m not saying the other things we’re doing – we are in the personnel business – aren’t important, but there’s not a single issue right now that’s more important. Congress needs to do its job! The Senate ought to be debating this issue right now.”

Click here or the photo below to watch Sen. Kennedy’s full floor speech.