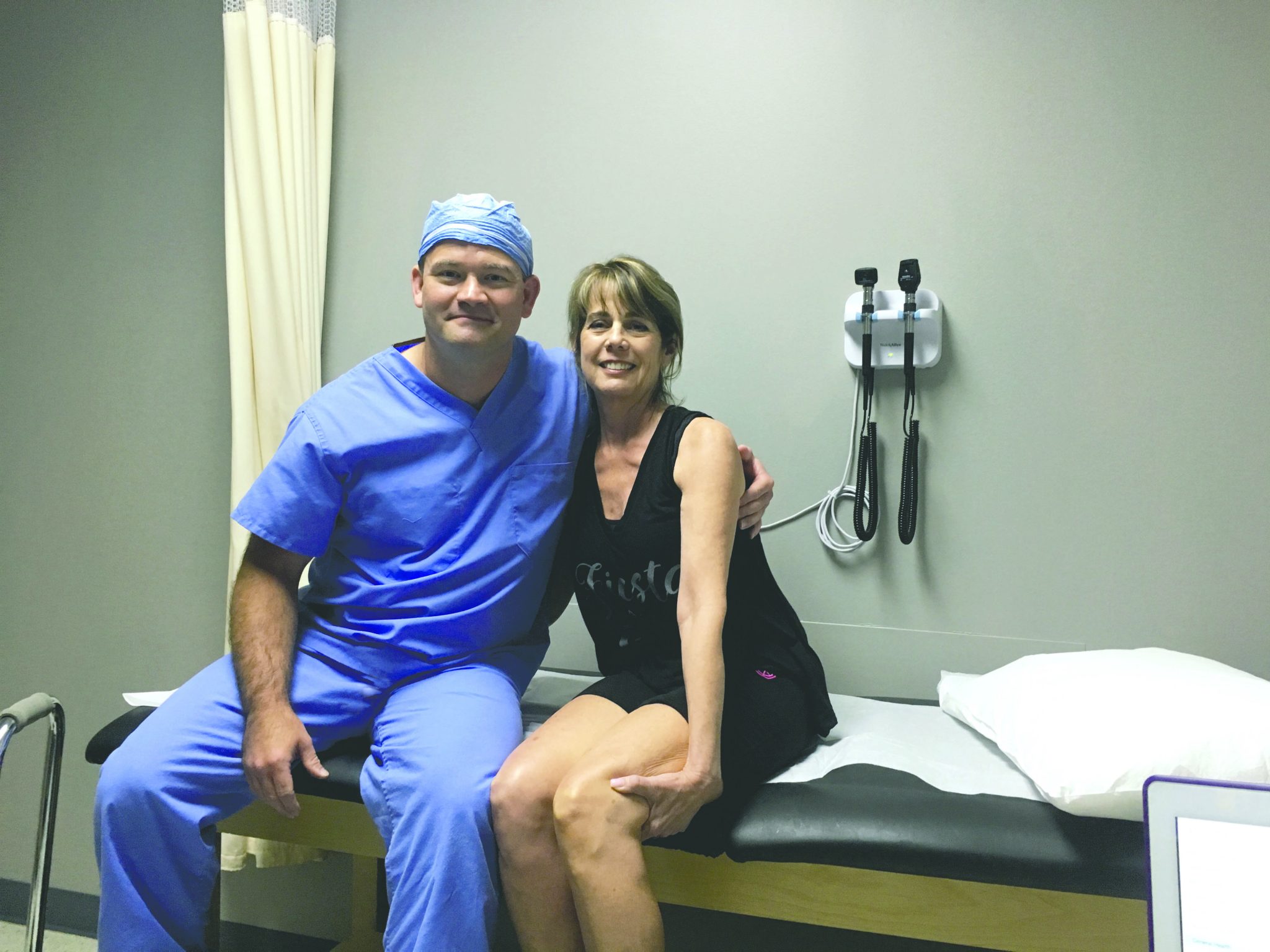 Woman travels from California for medical procedure in Minden

“There’s nothing we can do for you.”

This hopeless statement of finality was all Karen Battles heard for a year and a half as she tried again and again to find someone who could treat her excruciating hip pain.

Battles, a 58-year-old runner from California, has suffered from a rare cause of hip pain called ischiofemoral impingement since November of 2016.

Through months of being juggled from specialist to specialist, every doctor along the way either did not want to treat her, suggested a procedure that would leave her unable to run, or even doubted the very existence of her condition.

Every doctor, that is, except Mark Wilson, an orthopedic surgeon practicing in Minden, Louisiana.

Along with his mentor James Keene, Wilson pioneered a surgical procedure to treat this rare diagnosis. To date, the two have performed a total of 10 successful surgeries to remedy ischiofemoral impingement, more than anyone else in the country. In February 2016, they published their findings in a professional article, one that Battles happened to see a year later.

“From the minute I found the article, I thought there was hope,” Battles said. “When I read it, I immediately said, ‘Oh my gosh, he’s describing me to the tee.’”

Wilson’s experience with ischiofemoral impingement comes from his time in fellowship with Keene at the University of Wisconsin, where they performed 100 hip scopes. He now practices out of Wilson Orthopaedics and Sports Medicine in affiliation with Minden Medical Center.

“There is the ischial tuberosity, also known as your butt bone, and the lesser trochanter, which is a small process that forms off your thigh bone,” Wilson said. “Usually on runners, for whatever reason the two bones can be prominent, and they’ll rub one another. Then the muscles in between get pinched, causing excruciating buttock pain.

But it’s a fairly rare diagnosis.”

Battles began experiencing the effects of this rare condition after a normal treadmill session in November 2016.

“After a regular run the day before Thanksgiving, about three hours after I got off the treadmill I started having pain running down my right leg,” she said. “It was very unusual.”

The pain soon escalated, and after more than a month of doctor speculation and failed physical therapy, Battles was diagnosed with ischiofemoral impingement in January 2017. Less than two months later, Battles and her husband found Wilson’s article online.
“I took the article to my insurance and asked them to refer us out, and they just laughed,” she said. “They said, ‘This is experimental surgery, and we won’t send you there. This doesn’t even exist in our mind.’”

“It was a ginormous incision, maybe 12 to 16 inches,” Battles said. “We were horrified. I said I’d never be able to run again. They said, ‘Well you’re not running now.’ It was heartless, completely uncaring. Everybody was uncaring to me at that point.”

Wilson said his surgery, an arthroscopic resection of the lesser trochanter, is a much smaller cut.

“I make two small incisions and use a camera and small instruments to simply debride the bone,” he said. “The two patients on whom I previously performed were thrilled with their results. Immediately their symptoms improved, with a complete recovery by 6 months. They are now able to do activities they couldn’t for years.”

Battles spent months being shuffled from doctor to doctor in California, and she said none of them listened to her or could help her. She brought Wilson’s article to almost every appointment, and no one took it seriously.

Battles said one specialist told her “I’m not buying it for a minute,” and in another appointment she was told “We’ve never treated it, and we’re not going to start with you.” All the while, Battles was still living with the pain. The pain spread from her right hip to her left, where it was discovered that she had the same condition.

There were stretches of time when she would go to work in the day and come home to vomit from the pain every night.

At times she could not sit down for more than 20 minutes without unbearable pain.

“My life was deteriorating,” she said. “All this time I kept thinking I wanted to get ahold of this Dr. Wilson, but I didn’t know how to contact him.”

In March 2018, Battles finally found Wilson’s number through a chance encounter on LinkedIn with a different orthopedic doctor named Mark Wilson from Pennsylvania.

“I was actually able to talk to Dr. Wilson a couple times,” she said. “I was so taken aback. I was at work one day, and he just called. He didn’t even say he was a doctor, he just called and said ‘This is Mark Wilson.’ He talked to me for probably an hour after hours, which was unbelievable. He said, ‘Tell me whatever I can do to help you.’”

Several weeks later, Battles finally got the referrals she needed to come to Minden for surgery. She flew out on May 23, saw Wilson the following day, and underwent surgery on May 25.

After a successful surgery, her pain is largely gone. Wilson is hopeful she will regain the use of her left leg about six weeks after the operation. Then in six months, Battles will come back to Minden to have her right side done.

“He’s not like any doctor that we have seen through this entire process,” she said. “You couldn’t even put him in the same league with any of them.

Once the original diagnosis was done, there was not a single doctor [in California] that we felt wanted to treat me.

Everybody wanted to get rid of me – they didn’t know what to do with me. It was horrible. I can’t tell you how alone I felt. But Dr. Wilson did literally everything he could to make this easier for us, which is the complete opposite of our experience over the last 19 months.”

Battles said her high level of care in Minden did not stop with Wilson himself.

“I have never been treated so wonderfully as I was in Louisiana,” she said. “The people at the hotel [Holiday Inn Express on Sibley Road] were absolutely amazing – they did everything for us. They didn’t have a wheelchair, so the girl at the front desk used her office chair to help us get in from the car after surgery. She wheeled me through the hotel and up to my room. They were absolutely amazing.”

Battles also spoke highly of everyone she interacted with at Minden Medical Center.

That concept – you would never do that in California. You’d just show up, and that would be it.”

Both Wilson and Battles said they believe a common misconception is that quality of care is proportional to the size of the city.
“It’s kind of neat, because we’re in Minden which is a small town,” Wilson said. “A lot of people in Minden think that because it’s a small town, the orthopedic care they get is somehow substandard. When in reality, we have patients coming from across the nation for our orthopedic care.”

Wilson’s two other patients with ischiofemoral impingement, both successfully treated, came to Minden from Houston and Lafayette.

“It’s flattering,” Wilson said about the attention his article has received. “I spent a lot of time and effort in training to be the best that I could be. For me, it’s just about trying to make sure every patient has the best outcome they can have. My abilities and everything I’ve accomplished could not have been possible without God. I’ve had doors opened that I could never have opened by myself.”

Before coming to Minden, Battles went through physical and emotional torment for a year and a half. No one believed her. No one could help her. Her insurance even forced her to see a psychiatrist because they believed she was not handling the pain well. But now, she said Dr. Wilson has given her situation new light.

“The whole experience was so degrading,” she said. “But I felt like from the first time I talked to Dr. Wilson, I was validated.”