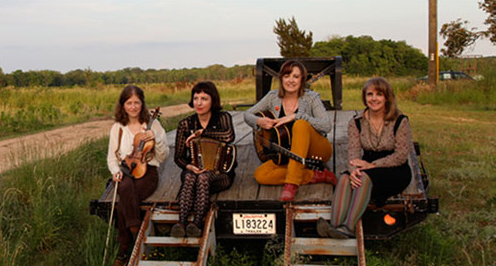 LAFAYETTE — The significance of two female Cajun bands named as Grammy nominees is not lost on the Magnolia Sisters. Although a husband and wife, Joe and Cleoma Falcon, made the genre’s first recording in 1928, Cajun music has generally been a men’s only club.

Magnolia Sisters co-founder Jane Vidrine moved to Louisiana in the early 1980s and could only find two women, Sheryl Cormier and her friend Ann Savoy, playing on Cajun bandstands.

“It was really not that socially acceptable for women to play out,” said Vidrine. “Now, to have this great dance band, like Bonsoir, Catin, and us nominated in the same category, it’s just amazing. I keep using that word. It’s not a coincidence. It’s time for it. That’s how I feel.

“Not to diminish anybody else, but it’s a wonderful statement about women and to the younger generation of women. It’s OK to be involved in this scene and women are important. On the other side of that, we don’t really think of ourselves as a women’s band. We’re just a band that happen to be women and we actually do things different, I think, from guys.”

Vidrine and the Magnolia Sisters celebrate Cajun with a woman’s touch as nominees in the 57th Grammy Awards, set for Feb. 8 in Los Angeles. The Sisters are up for the Best Regional Roots Music Album Grammy, along with fellow Cajun females Bonsoir, Catin and Cajun icon Jo-El Sonnier.

The Sisters are nominees for “Love’s Lies,” the sixth CD and second Grammy nomination of their 20-year career. The disc continues their trademark sounds of originals and forgotten Cajun and Creole ballads, waltzes and two steps.

French lyrics of love, tragedy and good times are familiar themes. The band throws in some string band tunes from the 1930s and a blues song penned by Ann Savoy.

Savoy said, like the group’s other CDs, “Love’s Lies” tells stories through older musical styles and a woman’s point of view.

“We love lyrics,” said Savoy. “We go for things not everybody does. That’s a big priority, to do something that hasn’t been done to death. The whole dancehall thing has been done a lot, but that’s one of the things that draw us in particular.

“We choose songs about the heartbreak of women, songs that a woman can relate to. When you sing a song, you have to feel it or have gone through something similar. We want it to be something we feel and we connect with in our hearts.”

Heartfelt connections go back to the band’s beginnings. Vidrine and Savoy had been friends since the 1980s, when Vidrine booked Savoy and her husband Marc to play at festivals and folklife programs in Missouri.

In 1983, Vidrine moved to New Orleans to direct the Folklife Pavilion at the World’s Fair. She met John Vidrine, of Mamou, who worked audio during her fair presentations. They married, keeping her in Louisiana.

John worked offshore, with jobs that took him as far as Africa. Savoy and music became Jane’s companions when her husband was away.

“Our kids were the same ages and they would play together,” said Vidrine. “When they would sleep, we could play music and go through a lot of Ann’s cassette tapes and pick out songs we wanted to do.

“I was by myself. Ann and music were great supports to me — all my girlfriends were. The Magnolia Sisters were a product of that and followed me through my life. It’s been a constant as my life has changed.”

Through the years, eight musicians have been Magnolia Sisters, including former members Deborah Helen Viator, Lisa McCauley, Tina Pilione and Christine Balfa. The current group, which includes Anya Burgess and Lisa Trahan, has been together for about 15 years.

After the Grammys, the band plays local gigs, travels to Idaho and California in May and tours Germany in the fall. The Sisters say wherever life takes them, music will always be a part of it.

“We’re always thinking, as we go through life, ‘Would this be good for our band?'”

Ann Allen Savoy is a four-time, Grammy-nominated musician, as well as an author, record producer and photographer. She is currently working on volumes 2 and 3 of her landmark book, “Cajun Music: A Reflection of a People.”

Savoy also plays music with her husband Marc, builder of the Acadian brand accordions, and sons Joel and Wilson in the Savoy Family Band. Ann and Marc also play with BeauSoleil fiddler Michael Doucet in the Savoy-Doucet Cajun Band.

A musician, teacher, folklorist and cultural activist, Jane Vidrine worked as a curator for the National Park Service in her native Missouri. Vidrine came to Louisiana in 1983 to direct the Louisiana Folk Pavilion at the World’s Fair in New Orleans.

After marrying John Vidrine of Mamou, Jane served as curator for the Natural History Museum in Lafayette. She has directed the guitar program at L. J. Alleman’s Arts Academy for the past 11 years.

Anya Burgess is a double-Grammy nominee as she also plays fiddle with Bonsoir Catin, a local band also nominated for the Best Regional Roots Grammy. She builds and repairs fiddles at her new shop, SOLA Violins, in downtown Lafayette.

A native of Boston, Burgess studied violin making at Indiana University and holds a degree in stringed instrument technology.

Music is in the blood for Scott native Lisa Trahan. Her father Harry was a dancehall musician in Louisiana and Texas for many years. Her saxophone-playing uncle, Willie T., heads the Cypress Band with Warren Storm.